Here is my signal path. 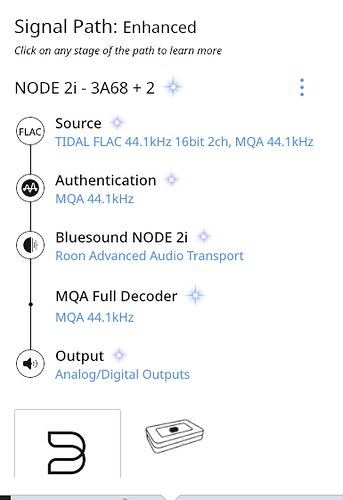 Because the Node 2i is MQA decoding (unfolding) and MQA rendering (upsampling) … which Roon considers as enhancing the signal.

All is well and as expected … it’s just systematics.

How to get lossless? (best sound quality)

In thet example your streaming an MQA file from Tidal you already have the best it can be. It’s just Roon designation for MQA as technically it’s not lossless, there is nothing wrong with it it’s all as its supposed to be Roon is doing nothing to the signal at all. If you play regular non mqa flac files or wav etc you will get lossless designation. I suggest you read up on MQA and you will see why Roon chooses to show it as enhanced and not lossless.

So, does ROON do a better job of decoding & rendering than the Node 2i? I set the Node to “No MQA Support” and now the Signal Path is lossless.

Decoding is decoding … makes no difference.

Rendering can only be performed in the DAC itself.

All is good, but if you wish you can have Roon perform the decoding by changing the zone’s advance settings to be MQA render only.

My Node 2i is set to Renderer Only.

Alrighty. I’ll try both and see what I like best. Thanks for your help!