Due to home renovations I find myself in a two bedroom apartment with 4 of my lovely family.

I’m thinking of one of these speakers but need to enquire does the 3.5 headphone jack mute the speaker?

If it does I think this should solve my music problems to the bedroom.

And if anyone knows the main difference between the two price points in the speakers?

What advantages does the more expensive option have ?

The speaker will then become a kitchen end point in our renovated house.

does the 3.5 headphone jack mute the speaker?

In one word: yes.

And be assured that the headphone section is not at all shabby.

As for the speakers: they’re all good. The Pulse Flex is nice for small rooms but truly excels when two of them are turned into a stereo pair. Its bottom end capabilities are a bit constrained by the laws of physics, but a little DSP goes a long way.

The Pulse mini is its bigger brother, that can hold its own in small to medium sized rooms.

The Pulse 2 is a beast. Let’s leave it at that.

I just got the Pulse Flex for our kitchen. It’s the only model with the 5 preset buttons. They are very handy for radiostations or even playlists. There are a lot of clicks or “touch screen tabs” involved in getting to radio or a playlist on the iPad. On the Pulse Flex it’s one click and you’re of the the races.
That one feature made me buy the Flex instead of the mini.

thanks for the help, good point about the pre-sets as the unit will end up in the kitchen.

Well the flex arrived and I’m very happy with it.

Loads of little nice touches, ability to turn off or dim backlights, saving volume per preset.

One note for prospective purchasers an over the air upgrade was done once I set up wireless but it wasn’t immediately obvious what was happening and it appeared as if the setup didn’t work.

Just listening via headphones and the sound is more than acceptable.

I look forward to more products from Bluesound/NAD with Roon integration.

I look forward to more products from Bluesound/NAD with Roon integration.

What more would you want? There’s a whole slew of Bluesound devices – and most of recent NAD can be made Bluesound compatible with a BluOS module. All of it is RoonReady.

If I wanted to replace my RPi on my main system feeding a Hugo DAC, is there a Bluesound offering at this interface?

Although it’s possibly hard to beat a RPi.

So, do I understand correctly that now the Pulse Flex can act directly as a Roon endpoint, it just needs connection to the network (via ethernet or WiFi)? And there’s a mention of a “battery pack, sold separately”. Does this mean it can be used outside, away from a power socket? Thanks.

Depending on how you connect, the Node 2 is an absolutely brilliant zone (will write more about it when I have the time). Outputs are analog, headphone, optical and coaxial. No USB (yet).

As Rene said, in pictures- 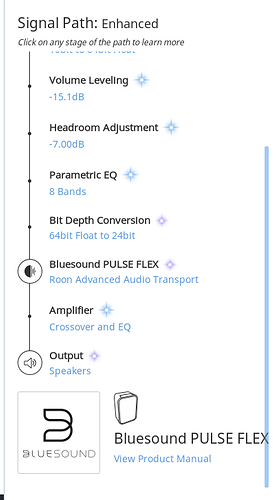 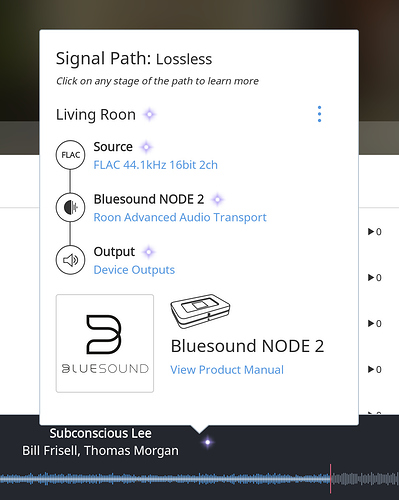 (OK, the magic happens after the device outputs – but that’s a different story… ;-)).

This all sounds worryingly intriguing (as far as my bank balance is concerned). So if I invested in two Flexes, could I use DSP and combine zones to get stereo out on the patio… My brain wants the answer no, but my heart says, yes!

The heart wins (as it should): yes again.

(Technically, you’d set the two Flexes as a stereo pair in the Bluesound app – Roon will see it as one zone).

Lenbrook (Bluesound/NAD) coming aboard and becoming RoonReady is a pretty big deal for the Roon ecosystem.

I am loving my Pulse 2. It’s an incredible piece of kit and Roon Ready MQA capable. Sounds amazing.

(Technically, you’d set the two Flexes as a stereo pair in the Bluesound app – Roon will see it as one zone).

Ah, just a moment, just a moment (I’m channelling HAL here): the Bluesound app. Let me guess. This is required, and it’s only available on iOS and Android. The likes of me, with my Windows Phone, are presumably shut out by the gates of Heaven and are doomed to Hell.

Not sure about the likes of you, but Windows Phone is indeed doomed to Hell.

That said, the Bluesound app is also available for Windows and macOS, if that offers any consolation. Pairing the two is basically a set-and-forget operation.

Thanks René - a Windows app will do very nicely. And I still love my Windows Phone - even though ABN AMRO has just killed their app, whilst at the same time advertising on Dutch television how wonderful their Mobielbankieren app is. Left hand/right hand - not a clue.

Just a tip of the niceties the RoonReady integration in the Bluesound system has to offer: these days, with just a dumb (Harmony) remote, I can – with one key-press:

All the while controlling the volume on my DSP speakers directly and switching to any of the 4 filters in my MiniDSP/Dirac box at will.

This morning I found my 5 y/o daughter on the couch (she’s allowed to watch a little Netflix on weekend mornings), listening to Baroque Radio. “I saw how you did it, daddy – and I like this music very much.”

Could be upsampling to to the device with Roon as well they all top out at 192khz. I do this with a pulse mini in the kitchen and the result is really rather excellent and it just works all the time. My ears also believe a fully wired connection ends up with a crisper sound and bigger soundstage.
You might not care for DSP or prefer to leave MQA unmolested where relevant.
Previously a powerline ethernet connection also provided a decent result though appreciated to many that represents anathema :o)

Next possibility for me a second device in the same room to provide that fully synched stereo effect despite their separated nature. Interested to hear that in action!