I’d never thought of classical AND jazz having an intersection. Just out of curiosity could you suggest an album?

The Jacques Loussier Trio would be one place to start:

The lack of AND is the key issue, a series of search parameters each AND whittling down the list at each selection is indeed the behavior that would suit me

The lack of AND is the key issue, a series of search parameters each AND whittling down the list at each selection is indeed the behavior that would suit me

I’ve been asking for this since I’ve subscribed to Roon. The only result this has delivered up to this moment is getting belittled by other "contributors’ because these requests of ours apparently go against the general direction the big guys are moving in.

It seems, so other “contributors” point out, that accuracy is not important and that we should accept that this is so because Google says so. Apparently we are forbidden to decide what is relevant to us. We have to accept what the magical algorithms deem to be relevant.

So far I have not seen any magic happen.

Not holding my breath either. Maybe we should all buy each other Apple watches

Mind that tounge doesn’t get stuck in your cheek

Someone like Jan Garberek on ECM would probably be a decent example. Actually a fair bit of the ECM label output is genre spanning.

NOT is already taken care of so there wouldn’t be any need to add it to the button.

How is NOT already taken care of?

I want all Jazz Trumpet NOT Christmas. How can I handle that today?

How is NOT already taken care of?

Unless I’m misunderstanding something this should work:

That said, if Roon did add a button for AND and OR it would probably make sense to be able to toggle it to NOT too.

Ease of use is one thing, but not everything …

Or Claude Bolling, although much of his stuff is original: 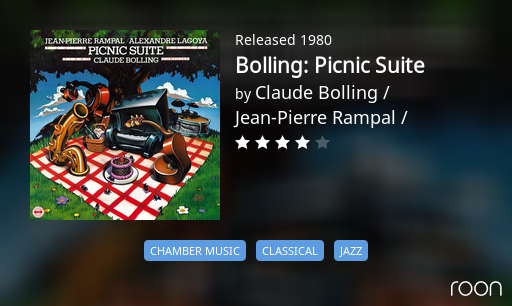 and John Lewis does a good job with Bach: 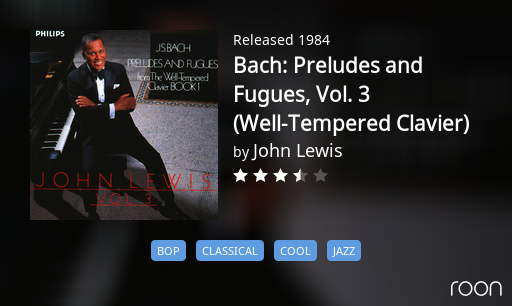 So where am I setting these parameters?

Still trying to learn my way around. Can’t find Focus on every page. So if I go to Genre, choose Jazz, how do I Focus on this page?

@Kevin_Owen, I think that Focus is only available when you’re viewing your collection by Artists, Albums, Tracks, Composers or Compositions.

Loving the way Roon is stepping in here, suggesting workarounds…making suggestions… empathising with lack of functionality and assuring us that our suggestions are being logged and are very valuable. 94 posts and not one from Roon.

You are really not doing well in letting things go are you?
First step, acknowledge you have a problem.

Haha, no, seriously Ged, I’ve accepted that Roon has moved on in “the big picture”; I like Roon for the most part and live with it’s warts. I just find it mildy amusing the way folks (me included, haha) like to prevaricate over wanting this and that, when it just is not happening, not now and not for the foreseeable. Stuff “on the roadmap” is still hanging around for literally years (vertical scrolling, for example).

I’m sort of trying to point this out to other folk, but then the discourse is so delicious I get drawn back in, haha.

Still no AND in focus?

No. Still no AND logic.

Further to that, the criteria in Focus is still too limiting and it needs more flexibility on which fields and indicators that can be included. For example:

I’ll tell you why this hasn’t been done yet. For the same reason they don’t put trailer hitches on motorcycles. Theoretically it could be implemented, but I’d like to see a motorcycle that can really pull a trailer.

OK, what do I mean by this? If anyone has ever tried my workaround for this:

There’s a dumb workaround. What you do is create the tag you want to use AND with, then double click so it is a minus sign. Then Tag everything that isn’t tagged with that tag (NotTag). Then you combine any other Tag with the NotTag clicked to minus sign. Effectively the logic is “Not NotTag.” It works but it’s too mind bending for a weekend activity.

They’ll realize it’s not about the capability of the interface. It’s the database - like a motorcycle engine – not enough horsepower to make the AND capability useful.

Try my workaround with a library of any reasonable size and any query that is likely to return more than a handful of objects. Go have lunch, put in the laundry, get in line for a Covid shot, whatever, you’ll come back and will be lucky if it has returned results.

There’s an issue with how the database is designed. It cannot perform to a level to return back such a query at any reasonable speed. We are talking long minutes.

My theory is that it has to do with indirectly tagged objects. So if I tag an ARTIST as “80s” and then I want to see all ALBUMS by artists I have tagged as “80s” it is pretty slow to return from that query. Its the “find one object based on a related object that has that tag” issue that seems slow. Combine that with finding an intersection of 2 such subsets, and you have a very long wait. Since tracks inherit some of their properties from artists and albums (genres etc.) I suspect that is why it performs so poorly.

So Roon probably built that logic in the interface, and tried it themselves. Then went out for coffee. They probably decided that rolling it out would just frustrate users with these wait times. Maybe the next big rollout improves database performance enough to allow for this. Who knows. But right now, there’s no point. The back end won’t support it.