Yeah. I was thinking about how grouping might work in the UI as well. Perhaps by allowing the user to draw a (negatable) box around adjacent search terms.

Or if you drag them one over the other. I really believe that the issue here is not how to do it in the interface (though after 1.8 i have serious doubts about this too), is the unbelievable stubbornness from roon side no to see things in the middle.

Sure. I mean, Roon’s UI was designed more like a video game than a text-based browser. There’s no limit to what’s possible. 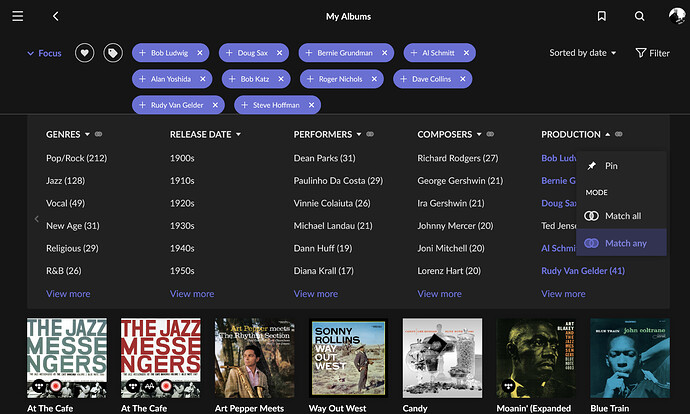 I want to create bookmarks with even more fancy logic, but having choice over AND (“Match All”) and OR (“Match Any”) within an attribute is a great start!

I am confused as to how it works now in Focus. It seems to be AND when you add options from different columns in Focus and OR when you add different options within a column. Is that correct?

That appears to be how it is working though seems odd to have different operators depending from where you select a variable.

I am confused as to how it works now in Focus. It seems to be AND when you add options from different columns in Focus and OR when you add different options within a column.

The only not confusing (and constant) thing about how roon implements this is that no matter what, they just don’t get it…

Others figured this out a long time ago: just make any available criteria selectable by any rule in any combination! It will probably take another 5 or 9 or 15 version until they’ll stop reinventing the wheel, personally I’m just curios with what name some smart marketing ass will came up for it (in a very different, very parallel and sometimes way much smarter universe this is called “Views”)…

they just don’t get it…

I’d like to think they do get it. Or at least they get it enough to be working on getting it right. But it’s been a very tortuous journey, and I sure hope it’s not going to end here:

Releases through 1.7: no choice of boolean logic. Everything is “Or”

First release of 1.8: without any announcement or visual cue as to the difference, boolean logic with albums only is “and” and not “or”. Oddly, while they look the same, logic for tracks and artists remains “or.” Not only is this change without visual cues, it breaks bookmarks for people that use “or” logic with albums as bookmarks.

Latest 1.8: album logic back to “or” with user Tags. No option or choice. Choice of “and” or “or” logic for selected, but not all, Roon-applied (not user) tags. Almost like the first release of 1.8 was a coding error.

Honestly, part of the frustration is feeling like your taxi driver is lost in Manhattan. Either pick a lane or address all needs. But please stop pinging back and forth between two mutually exclusive types of functionality.

Given the recent release of 1.8 and the fact that there are now choices, and that album logic was reverted and not expanded, it seems that Roon could have just enabled the choice of logic for ALL tags, including ALL user tags and all Roon tags.

Honestly, part of the frustration is feeling like your taxi driver is lost in Manhattan.

And the more you tell the driver where you want to go the more he ignores you and follows his own route to destination untold.

I certainly support this feature request (which has been partly implemented), but I think it is linked to another issue: the distinction that Roon makes between library tracks and non-library tracks. I can really dig a track, put it in a playlist (or ten), play it a hundred times… but that does not mean it is “in my library”. So, it will not turn up in Focus, no matter whether focus uses boolean logic or not.

FYI: there seems to be a plan to solve this issue “at some point”: How do people typically mark artists/albums for future exploration? - #22 by brian

Please use 4 colors and have on the focus ‘tag’ +AND, -AND, +OR, -OR . Then all of this would solve the limiting or extension function of search to the satisfaction of everyone that are complaining for days, months, and years.
An old thread on this did not get anywhere: Boolean Logic in Focus

But now with the focus function in 1.8 version this gets really crucial for a powerful UX!

Statistically and logically speaking, the logical AND operator is the best compromise. But if we could choose …

Yes, NOT AND (NAND) can be used to generate any Boolean function, but Roon should not force its users to perform contortions in order to get results. Just add OR. This sort of functionality should have been there from the start.

The problem with the NAND method is it currently requires a massive amount of clicks to get a result because of the way the UI is designed. It works but it’s very cumbersome. I can see why they switched from OR to AND. It suits their Focus model better based on the cascading criteria in the UI. But I agree, more flexibility is required.

For curiosity where can I do Bob Dylan AND Qobuz? Sorry, have no TIDAL.

Numerous ways. (I did Tidal, works the same for Qobuz.)

You note that this has 20 albums while the previous one had 19. That’s because the funnel looks at album titles, not just artists, and the second album here, by Barb Jungr, has Bob Dylan in the title.

I’m sure there are many other ways.

Thanks, great, now I found it. I was sticking on ‘overview’ and could not see any focus. Thanks to your screen shot I saw that one needs to switch to ‘discography’. I get 5xx albums. The second way going over ‘my albums’ I end up seeing 4 albums of 280 of my library.
So are you now questioning if it would be good or not to see with color indicators that focus is using +AND, -AND, +OR, -OR? I think it is no about testing if people understand Boolean operators but more about transparency whether Roon is using AND or OR and indicating it to users. So much about my request here.

My argument, based on extensive research that has published over decades, is not just that people don’t understand Boolean logic, but that is is counterproductive. They make a search, get thousands of hits, try to add conditions to the search and as often as not navigate away from the goal.
This is not a personal opinion, it is well known in the industry, Amazon and Google don’t use it and they have been fairly successful.

Roon’s logic was always, dating back to the Sooloos precursor nearly 20 years ago, OR for conditions within a category like Labels, AND between categories.

They made a change in 1.8, I hope they change it back, it has been raised with them.

There are cases in which the use of multiple logic operators lead to the result. I have nothing against Roon proposing the best (first choice) operator, then clicking once to negate, twice to change the operator, and three times to negate this one. No need to cite studies from the beginning of computer age. Nobody needs to use all the features excel offers with formulas. But offering 50% is a bad design choice.

Beginning of computer age?
I think this move to unstructured search instead of Boolean is very recent.
Since the turn of the century (this century).
I can’t think of a product built for non-programmers in recent years that exposes Boolean.
In fact, I applaud programmers for recognizing that their mindset is atypical and they make more money acting on that recognition.