Boolean logic in Tag Queries! Does it work well for you?

I was just playing around and realized that Roon had adjusted their Focus logic to AND from OR regarding Tag combinations.

At least potentially. The database seems to be much more peppy about returning results with tag combinations than it used to. Now it’s just annoyingly slow rather than unusable

BUT, Roon seems to tire out after displaying a combined query like this - slows down, takes a while to shuffle the query results, couldn’t load or play the first song (even though it’s right there on the HDD). I assume there is some hangover from this process that affects Roon performance for some period of time?

Anyone else tried and experienced this?

It’s frankly great if Tags can usably be combined this way. You can stratify your whole collection with rating tags and then only play some other tag that represents a mood or era (or whatever) and then only play a single rating from that mood - i.e. with friends over, only the hits, by yourself, all the deep cuts.

Well, sadly, we have fellow Roon users who have built a system of Bookmarks based on OR which are now broken.

Yup. That’s me. I have a number of Bookmarks like this one: albums that were mixed or mastered by any of my favorite production engineers. This one was handy for turning up what are usually the best sounding albums in my library. Dead with v1.8 (at lest until I can figure out another way to do the same thing). :-\ 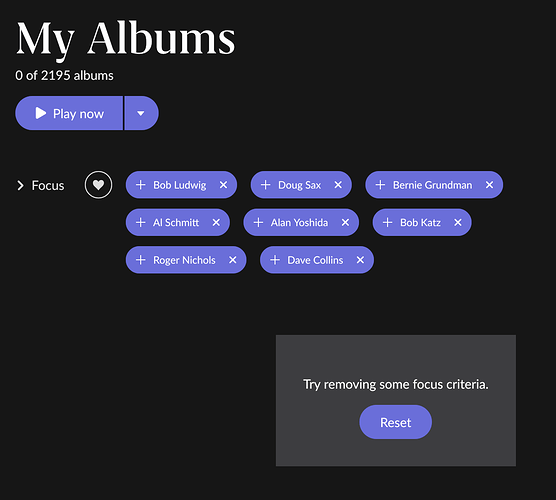 Oh no! I hadn’t thought of that.

I’ve also discovered that the change only applied to albums. It’s still OR with tracks.

Well, nevermind. Roon hangs like a mofo when you try to combine these queries anyway. It feels like search used to when if you’d search 5-6 things in a minute or so, Roon would just gum up until rebooted.

In light of the really odd situation that’s occured with the rollout of 1.8, I’m feeling in limbo now with Roon. Im expecting a lot of the things to be reversed somehow or “corrected” which
negates the progress made. I’m confused! Fixed for some and completely ruined for others! I like the AND implementation, but I am wholly reluctant now to invest any time into the Roon Tagging needed to get the best of it. Unless Roon give options to use AND as well as OR and irons out the hanging like a mofo as you rightly mention

, I fear it’s going to compound the marmite feeling of this release.

@danny has weighed in on this issue, which has been widely discussed since release.