I keep exploring Roon and hearing more music than ever

So every now and then I find some things that have an unexpected behaviour (well, for me at least).

I have quite a few boxsets, either anthologies or collector’s editions.
They are placed in my HDD in the folder structure Artist / Boxset Name / Album Name / Tracks

I don’t know if it has to do with the folder structure or just the fact that Roon recognised those albums were part of a Boxset.

I can go and edit each album in Roon, ask to re-identify it and pick the correct name from the options Roon gives me (has never failed to show the proper album name in the options so far), but it’s a bit time consuming, and, if for a 4 Album boxset it’s doable, for a 20 album boxset (or even 90 as one I have) it would get boring and time consuming. I know that when the option to use local metadata for the Album Name comes, that could fix it, but nevertheless I think that that’s perhaps not the way you had envisaged Roon to work with boxsets either. So I’m leaving the report just in case.

I can understand this. The Bill Withers box from last year had a similar issue if I recall correctly, and I ended up going in and re-identifying each album so it would be listed as the original release. It was time consuming for 9 discs, so 20 (or 90!) sounds pretty awful.

I’m trying to think whether there’s something better we can do here. How are the discs within the set organized on your drive? One disc per folder? I assume all the album tags say “Studio Albums 1970 - 1990” right?

There is a related but more complex situation where multiple albums are crammed onto a smaller number of cds in a boxed set. The simplest case is for example in a Miles Davis boxed set (20 albums onto 10 cds) or one for Count Basie (eight albums onto four cds) two complete albums are on a single cd, but in the case of the “Citizen Steely Dan” boxed set, seven albums plus singles are straddled over four cds.

There is an even worse problem in classical works, where a number of performances is rearranged from the original cd releases to fit into a smaller number of cds (Aldo Ciccolini Complete Satie or the 10 cd boxed set of Arturo Benedetti Michelangeli recordings are the most obvious examples in my collection), but I realise this bleeds over into the generalised metadata completeness area.

I understand that about original release vs. whole set, what doesn’t feel right is 20 separate albums in the library all named “Studio Albums 1970 - 1990”. Having to go inside each one to determine which one it is kind of kills the experience in that bit.

So Roon places 10 albums in my library all named The Complete Studio Albums 1970-1990, despite the tags in each one of them having the album name.

When the option of reverting to original tags is enabled I’ll probably be able to select all 10 of them and just choose to revert to my tags (I hope so), but I’d have to do so for all boxsets and don’t know if that’d mean loosing Roon features in those albums, it probably would.

Hope I managed to explain it better this time.

So Roon places 10 albums in my library all named The Complete Studio Albums 1970-1990, despite the tags in each one of them having the album name.

This seems wrong to me too, but I’m checking with the guys. Will follow up when I have a better idea of the issue, or if I need more information.

We’re still looking into why these albums were tagged as part of the box set, but I have a theory – as a starting point, I would recommend reading @jeremiah’s detailed post here about how we recommend organizing your box sets.

So, your organization scheme seems pretty similar to what we use looking for box sets, which may be why we’re identifying them this way. It could also be that we’re not identifying these albums at all, but regardless, the post linked above is worth a read.

I’m also going to follow up via PM @Skywatcher - I’m interested to get a little more information about your collection, and you can expect some more follow up on this once our developers have a look. Thanks!

I have a similar problems in the way Roon identifies some of my Boxsets.
For a example I have the Miles Davis “The Original Mono Recordings” boxsets composed of 9 different albums remastered from their original releases.
My folder structure is as below: 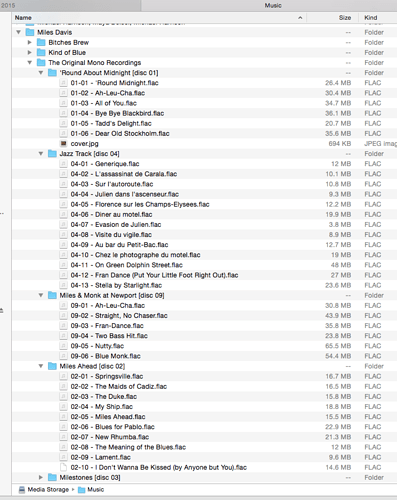 Roon created 9 different albums all with the same name “The Original Mono Recordings” for each disk in the boxset.

What I would like is to have Roon identifying the original releases since it becomes impossible to find the album to listen when I browse my library.

Should I have a different folder structure?

Hey @jato1569 – did you read over Jeremiah’s post linked above? I think if your folders and media numbers (Disc X; Track Y) indicate this is a 9 disc, they will all be grouped as a single album with 9 discs.

Alternatively, if you go into each album and use the Identify feature (under the pencil) you can make these albums appear as their respective original releases.

Let me know if that answers your question!