Can you sort albums by Album Artist?

I can’t see a way of sorting by Album Artist in Roon, which would be awkward (love it generally though). And if I sort by Composer I get all sorts of stuff for non-Classical albums

nb really like the general tone of the forums, so much more civilised than out in t’internet

The good news is, there’s an easy way to get things the way you want. 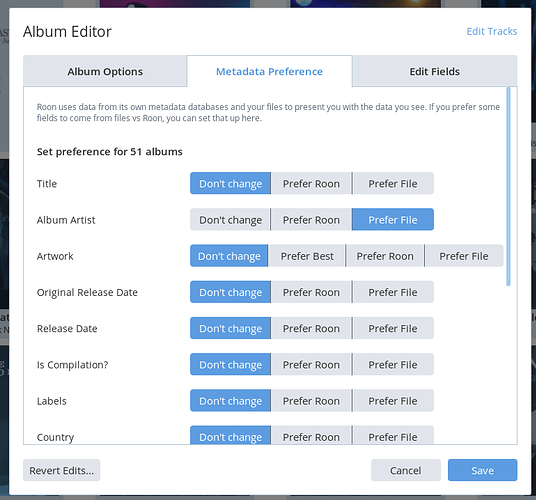 Then, Click Save and wait for Roon to think about it (there will be a spinner in the upper right to show progress.

Once this is done, your album artist strings should be used instead of ours. Then, when you sort the album browser by “Artist” it should use your tags.

FYI while we’re looking at this page, Roon doesn’t let you access that “Metadata Preference” tab unless you select >=2 albums. If you only want to adjust a single album, you’re forced to go into it and select all tracks before you can get to those settings. 1st-world problem, I know, but really, really annoying. Can this get fixed?

I agree, that sounds wrong to me. This set of switches totally makes sense when only one album is selected. It’s on my list.

And, while we’re basically on the same topic, there appears to be some kind of limit to how many albums you can adjust globally using the “Edit Fields” tab on the same screen. For instance, let’s say I want to change all my live albums’ album-type from ‘main’ to ‘other’ (wonky workaround to get that stuff out of the ‘main’ portion of an artist’s discography). So I sort albums on title (with my customized symbol for live as a prefix in front of the album title), but then when I highlight all the live albums & go to edit the “Edit Fields” tab is not there. I have to work backwards to find a smaller number-of-albums to highlight before Roon shows the “Edit Fields” tab. Can’t figure out what your ‘limit’ is, but maybe ~1000 albums? Anyhoo, I’ve got ~4000 live albums, so I find myself highlighting, scrolling, highlighting the ‘end point’, hitting edit (no worky), repeat process with fewer albums highlighted, hit edit, etc until I can see the “edit Fields” tab & do what I want to do. Same for attempting the inverse, i.e. highlight non-prefixed albums & globally change to ‘main’…

@Danny has alluded to vestigial ‘restraints’ from the Sooloos platform – perhaps that is the problem?

These aren’t vestigial restraints. It’s all about performance and responsiveness when fetching the data needed to drive that display. We’re trying to keep you out of situations where your database needs to work for more than a few seconds to display data to you, since this interrupts general usability of the app.

Many thanks, that’s done (or doing - still updating) the trick

I seem to have just lost about 2000 albums in the library, may come back to you on that one, will play first (it happened before I made the changes you suggested so not related)

Great service by the way