Can't play next track? Atrociously counter-intuitive - no, thanks

Having just signed up, I cannot be grateful enough for the existence of the trial period. Even though similar threads have been created on the topic, I felt the need to express my own dismay at the absolutely counter-intuitive way of how tracks are played on Roon.

Sure, lyrics, metadata completion and automated suggestions can be great for many; but to disregard the fundamental way people have been playing their music since, well, forever, is just too ridiculous to justify any use of this system.

Yesterday, after installing Roon on Mac, I spent at least a couple of hours JUST trying to have it play the next track on my track list, just like we all do everytime we press “play” on a CD, vinyl, Spotify or iTunes.

And to my complete surprise, I could not do that - I would either listen to a completely random track (even though shuffle was presumably disabled - another sad UI tale here), or playback would simply stop there and then, as if there was no automatic playing of the immediate next track. So here I am, trying to enjoy Iron Maiden’s Seventh Son of a Seventh Son and starting with Moonchild, just to discover that Infinite Dreams will not be next.

Surely some holier-than-thou apologist will say that “it’s easy, just select all tracks you want and put them on the queue” - but no; one should NOT be required to take such a ridiculous complication to just play one’s own music library. I do not have time in my life to spend even more time taking “n” additional steps to play music - I want to enjoy it.

Not to mention the crazy UI choices, such as the oversized “roon radio” tab to the right, the font size/style that cannot be adjusted on the list (making everything look blown up on my 5K screen) as well as the visual pollution of things that we are not even allowed to dismiss/minimize on the main screen.

Another point: once the folder import process was done, I found out that both Ace of Base and Dio decided to launch a joint album called “The Collection” - no this is not true; but since their albums shared the same title, Roon decided to merge all tracks together and refer to the artist as “Ace Of Base/Dio” - never seen that before either.

So no, this is not for me - I do not have financial issues and was ready to splurge 600 bucks on a lifetime subscription; but I am happy to see that, less than 24 hours later, the trial has shown me a different perspective. I will stick with Audirvana+/iTunes for my lossless collection for now. while hoping that in the future such issues will be more seriously considered by Roon or other potential competitors.

I wanted to provide a constructive reply as a fellow new user. However, your sentence “some holier-than-thou apologist” indicates you’re just here to vent.

Sorry you had a poor experience.

And to my complete surprise, I could not do that - I would either listen to a completely random track (even though shuffle was presumably disabled - another sad UI tale here), or playback would simply stop there and then, as if there was no automatic playing of the immediate next track.

You sound angry and frustrated.

Don’t exactly understand why you can’t play the next track as you want, but I’m thinking it’s because you simply don’t know how to do that with Roon. It isn’t impossible or as difficult as you seem to have experienced.

“it’s easy, just select all tracks you want and put them on the queue”

You don’t have to do that.

Surely some holier-than-thou apologist will say

In spite of this there are people here, with more forbearing than I, who will help with your understanding.

(even though shuffle was presumably disabled - another sad UI tale here)

BTW - I also hate the way Roon handles Shuffle and have complained about it numerous times.

No need to feel offended, Richard - after reading a long thread on a similar topic, I know exactly what I am talking about - people trying to talk down common sense and justify the unjustifiable just for the sake of defending current (bad) UI choices.

Not offended in any way. Just didn’t want to add fuel to the fire by offering a counter opinion (as a new user).

You sound angry and frustrated.

Don’t exactly understand why you can’t play the next track as you want, but I’m thinking it’s because you simply don’t know how to do that with Roon. It isn’t impossible or as difficult as you seem to have experienced.

Well, after trying it for several hours and consulting threads, I do - because such a basic thing should not even require debate or consultation.

You don’t have to do that.

This is from a long thread discussing the same problem. And again, the fact that I am required to ask this trivial question here tells me that something is deeply wrong with how the playback UI is devised.

Do I need a MBA just to learn how to do that?

I won’t begin any flame wars, Richard - if you have a clear answer/solution to the issue above, I will be happy to hear it. Likewise for a different opinion, as much as I may disagree.

If you are trying to do this from within a playlist, then I don’t believe you can.

‘Play from here’ is an option from the queue.

Play from here is available on tracks in a playlist too.

Hmm, I couldn’t find ‘Play from here’ in a playlist. The closest I could find was ‘Add Next’. 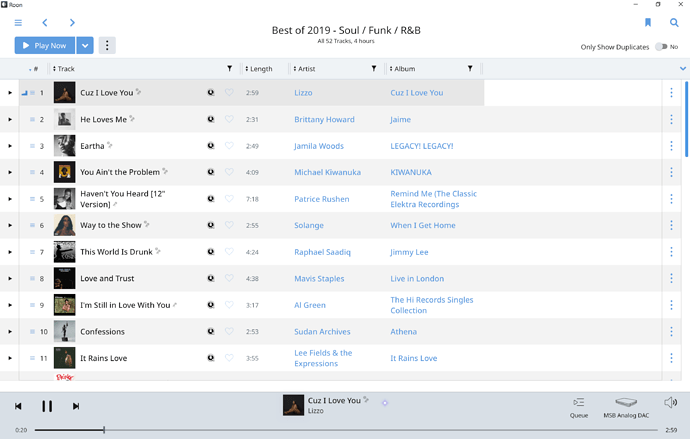 2020-08-23 (2)3228×2057 615 KB
It should be as intuitive as you’d expect. Just click any of the arrows on the far left of the screen and that track will play. (this is the playlist track screen).
If you are on the Queue screen, tap the open space to the right of the album icon and "Play From Here’ comes up.
If you aren’t getting those responses, something is set up funny. It’s possible you have the shuffle function left on? Is that shuffle function blue (on) or black (off). If it is off, clear the queue and play the playlist again.
xxx (Soylent Green is people.) August 23, 2020, 12:31pm #14

Aha, one needs to set the option in Settings==>Play Action.

In the playlist, left click on the track title that you want to start play from. 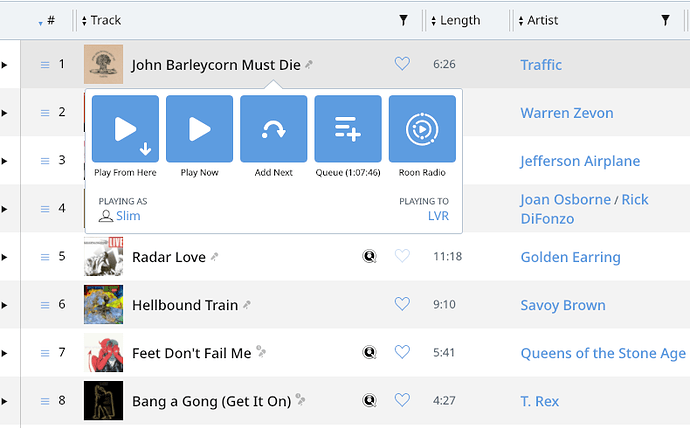 Simple, once you know.

They can be enabled/disabled in Settings? Although I don’t remember enabling anything above and beyond the defaults. I guess I might have done…

I guess we’ve lost the OP for good, or maybe he just doesn’t have the manners to say, ‘Thank you’.

Too busy venting I suppose

Um, he may just have a life beyond Roon…

Of course not; thanks a lot. I was just doing something in my garden and taking care of my baby son. Will check the possible solutions above and revert back ASAP.

Here is the screenshot of my Roon screen - as you can see, no “play from here” option is displayed. 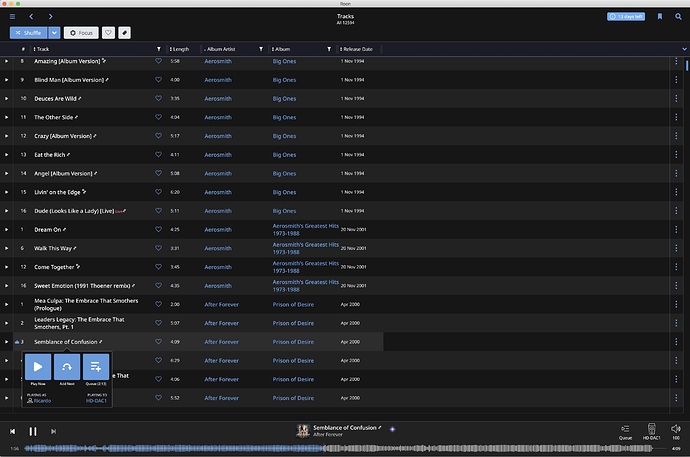 And to add: what has just happened after playing that track from After Forever? Playback stopped. Not really what one would expect when playing from a track list.