I’ve just invested in the Chord Hugo 2 and Chord 2go. I use Tidal

Any thoughts/.impressions and suggestions for set up with Roon ?

Use it wired, not wireless, I have the Hugo2 and 2go and have been very pleased.

Not wireless ? That was the whole point. Getting worried now…

Is the sound bad ?. Then not sure of the poi lnt of 2go? Sorry just a bit confused

I have mojo poly wireless on a mesh system and it’s been fab.

I was getting seriously worried about having to have a wired connection ! Why ?. Surely the reason is to have the potability but maybe I’m wrong.

You might flag the poster you are questioning, @Ratbert to find out his reasoning for using it wired.

Wireless systems seem to cause numerous problems on here as I guess Roon uses more bandwidth than other systems. I guess because of this ‘go to’ answers advise Ethernet connection as best and in fact I would normally advise that myself for a home system to perform at its best. As I stated though I have a robust mesh system and never had a problem with wifi on mojo/poly.

Yep Im hoping.im ok. I have 400mb broadband so should be fine. Thanks again

have 400mb broadband so should be fine.

FYI, this is not the part of the network in question, it is the local network that has to be robust.

Sure. Did worry me but understand fully. Thanks

With a a small exception (I use Qobuz, mainly because of MQA)
Super happy, mainly listen to it in Audeze LCD-X (they don’t require much power).
One downside of this chain – poor battery life of both units. And many previously reported how fragile they are when it comes to battery cycles.

P.S. I use them only wirelessly. Gentlemen, if you built a poor home network, that’s not Chord’s fault but yours – especially if you store your library on NAS

I stream up to DSD256 and have almost no troubles with speeds. 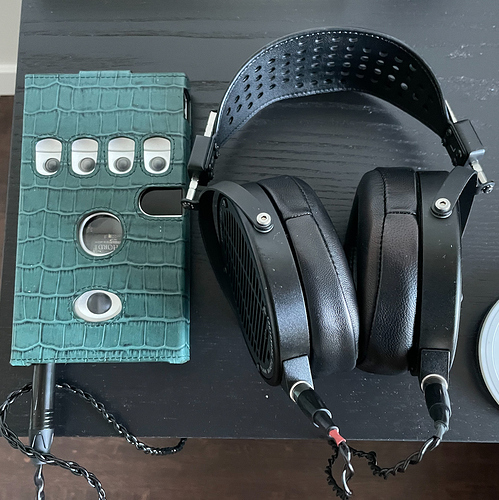 Thanks again. I have grado GS1000e so keen to get this set up. Just love love cables and fidelity sound.

I wish I had tried to audeze now but too late. Might demo them in the future.

My Roon experience with Hugo 2 + 2go is not good over WiFi, even at a rural location with very few other WiFi networks, and pro-level gear (UniFi) that supports solid WiFi Roon streaming to Naim and Linn gear.

Simply put, wired connections are more stable. If it works ok wirelessly, and you have good network, go cordless. If you start getting dropouts, that is the likely cause. A mesh network might be a good thought to improve coverage more consistently throughout your home.

Please stop making excuses for Chord. I’ve been setting up high-quality WiFi networks with pro gear for longer than I can remember. Both of the sites where I’ve had dropout problems have mesh networks that work perfectly otherwise, including for streaming Roon and video to a variety of other gear.

Well, it’s quite likely that other systems you have rely on 5GHz from your router, while 2go only supports 2,4Ghz. So unless you’ve combined those 2 network into 1 (Verizon Fios and ATT Fiber allows that) or live in wifi radio signal heavy environment or have sturdy walls then yeah you will have troubles with connection, that’s why so many other folks who live in a single family house have troubles with wireless. Simple wifi extension will solve the issue, but of course it’s Chords’ fault. Not.

You have no idea what you are talking about. I have dual-frequency mesh points throughout both locations where I’ve tested this, all UniFi gear. I don’t use the junk wifi that ISPs provide, and on one location I’m on private fiber. Stop making excuses for Chord, they screwed up this.

I’m gonna try the loaner kit first as chord are still closed for the New Year and play it by ear. I’m slightly now concerned from what the community has experienced. Worst case I’ll take a standalone Hugo2 and OTG it. Thanks anyway

I’m with you, Fernando. Chord’s wi-fi implementation is substandard. On the other hand, it sounds great when it’s working. Or when it’s wired.

I agree it sounds great. What’s sad it that I got it for outdoors listening when the weather is nice, but its unreliability makes the experience frustrating. Sitting 2m away from a top-notch dual-frequency access point, in one location without any other networks above -80dB, and still getting stutters and skips…