So I took an SACD ISO, ripped it to .dsf files, and added to ROCK. I have an old Mac Pro connected to a Chord Hugo2 via USB. I attempt to play said dsf file and it is barely audible. I didn’t even realize it was playing at first because the hum of the fans in my Mac were loud enough to wash out the song (and that’s saying something since the fans are not that loud).

The Hugo2 is currently set to a DSD Playback Strategy of "DSD over PCM v1.0 (DoP). When I change that to “Convert to PCM” the song plays at a completely normal and acceptable volume.

What am I missing? I’ll gladly provide screenshots or attempt to re-rip. Any additional info I need to provide? Latest ROCK / Roon on my Mac (in case anyone asks). Anything else you need just let me know. I’ve poured through the forums and it seems like the Hugo2 should be able to play it just fine this way, so I don’t know if I’m missing something.

I believe you must rip with +6dB gain adjustment…

Well that’s interesting! Had not come across that yet. I’ve been using https://github.com/setmind/sacd-ripper to extract the files from the ISO, but I don’t think that has any option for gain modification. I’ll research around for another method!

Michael, as you have a Mac at hand, try XLD. From their website:

“For SACD sources, usually they have 6dB headroom against the peak level. So applying +6dB gain will produce a proper sound pressure level.”

Please note the DSD import menu, where you can adjust the gain.

I’ve used XLD before, but surprisingly never for ISO ripping. Tried to convert the ISO to DSD64 with the +6 gain but still no improvement.

Once again though, as soon as I change the Hugo2 to convert to PCM (in the Roon device settings for the Hugo2) it works as expected.

but still no improvement.

Then I am sorry others have to take it from here. I have no experience with DSD on Roon or Chord DACs… In my system I use a 16/44-48 NOS DAC, so no DSD processing here.

No worries! I appreciate your help though! Definitely taught me something new today!

For anyone else who may want to attempt an assist, here are some potentially useful screenshots: 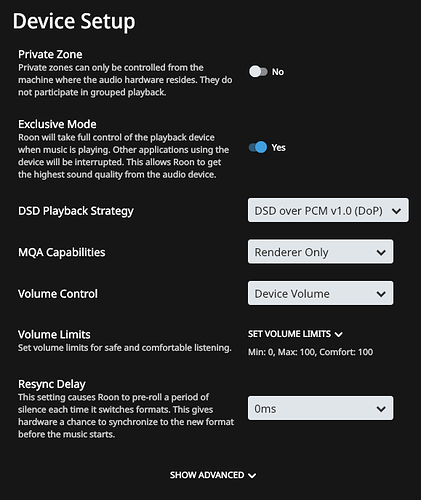 _NOTE: If I change “DSD Playback Strategy” to “Convert to PCM” it instantly works, but states that the signal path is “High Quality” rather than lossless. To the best of my knowledge the Hugo2 should support what I’m trying to do. 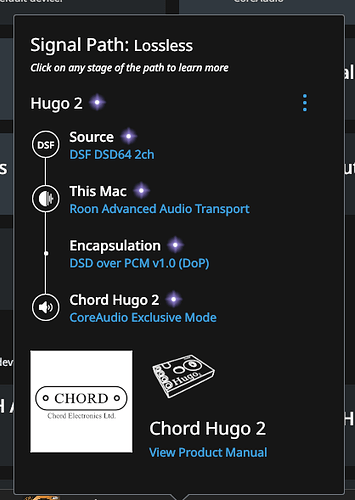 Michael, I moved your topic to Audio Products–>Chord; I think there it will be seen more widely.

I’m not a hugo2 owner but know it supposedly supports native DSD so maybe no need to use DOP?

Is there a particular option I would have to select for native DSD? There definitely was nothing that just straight up said “native”.

I believe that Roon is adding the +6 db gain in the DSD to PCM conversion process… See: https://kb.roonlabs.com/DSD_to_PCM_Settings section on “DSD to PCM Gain Boost”…

Something does not seem right with the device setup screen… Shouldn’t there be the device name at the top of that screen… So, maybe the setup settings choices are not correct for your Hugo2… I have a Qutest, which is essentially the same as Hugo2 sans the battery and preamp, and this Device Setup screen does not have the DSD Playback Strategy line and choices at all… Also, as far as I know the MQA Capabilities are “No MQA Support”… 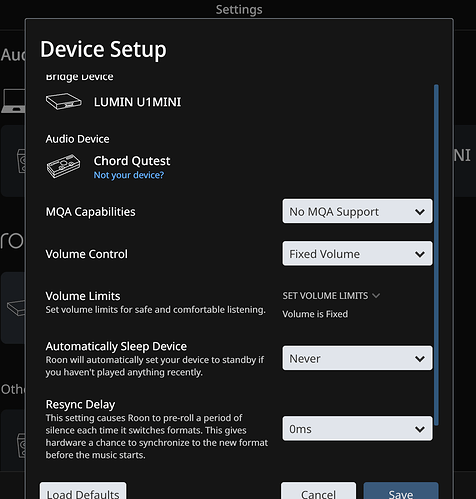 What happens if one sends native DSD or DoP to the DAC? In that case, the DAC does the conversion and must adjust the gain? Is this done automatically by the DAC? I don’t have any experience with playback of native DSD…

Sorry, I had scrolled down. Here is the top of the “Device Setup”. I changed “MQA Capabilities” to “No MQA Support”: 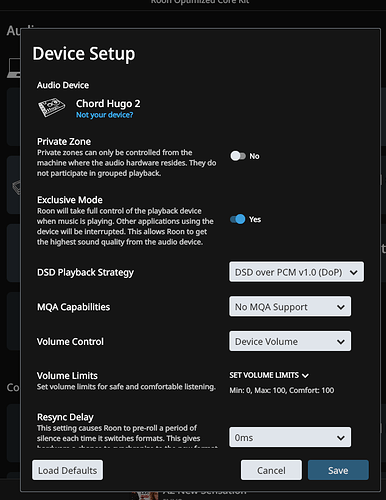 It is interesting that your Qutest does not show the “DSD Playback Strategy” option, because my Qutest does show it: 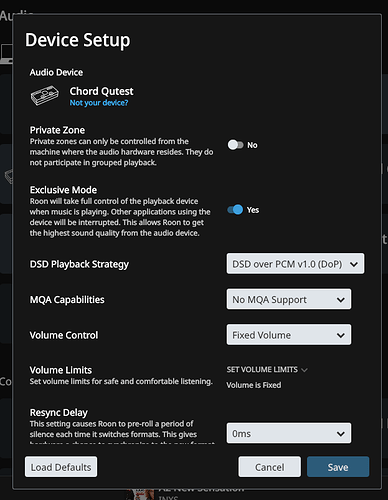 So it’s either something with Chord and Roon, Chord and my Mac, or my Mac and Roon. I just don’t know what I’m missing…

What I can see is that you have your Hugo2 configured with Device Volume, while the Qutest setup has Fixed Volume. Where does the output of your Hugo2 connect to? Do you have an integrated amp or preamp with volume control? In that case, try setting Volume Control to ‘Fixed’…

Maybe its the Lumin that is different here, although it should not be an issue as I have all resampling and conversions off there too… If your on a Mac you should not have to ask Roon to do any conversions as it should have already been being done by the Mac (magic)… I have no issues with Audirvana… Yes, some DSD music files are quieter…

So, I have to ask if this is a headphones setup or do you feed another preamp or amp directly? I am unfamiliar with your gain structure… Do you have the same issue with the your Qutest? Maybe you just have to turn up your system somewhere? Looks like Andreas is on the same wave length?

My Hugo2 connects to a TCA HPA-1 (https://www.tomchr.com/products/hpa-1). Currently the volume knob on the amp is around 11:00, volume on the Hugo2 royal blue (which is directly in the middle of the volume spectrum). Any other song format (FLAC, MP3, ALAC, etc…) plays with more than sufficient volume.

It’s definitely a headphone setup, but it’s weird that only DSF files are having issues; however it’s only DSF in Roon. I downloaded Pine Player for Mac and it played my DSF files without issue: 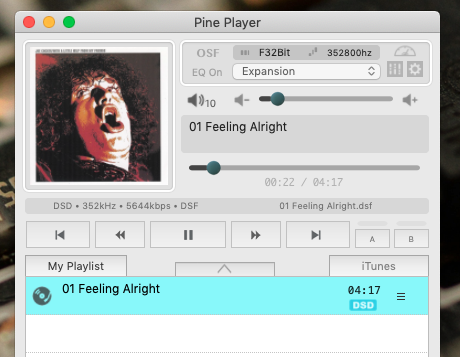 Taking the suggestion of @BlackJack I downloaded a test DSD64 file. Still experience the same issue: 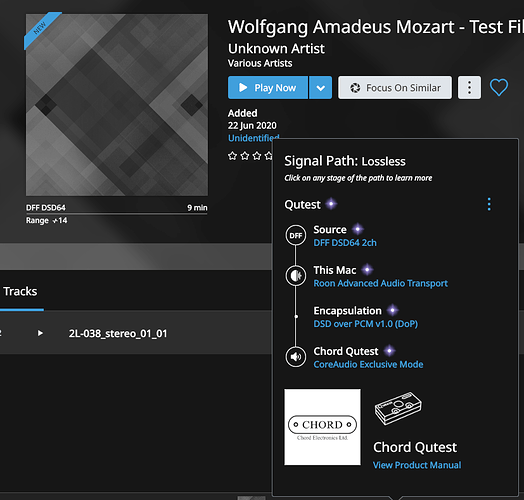 I can’t thank you all enough for helping me try and diagnose this. It’s definitely frustrating