I’m also having the same issue. CCA into my Chord DAC. All HighRez drops out.

It’s really a pain when it does this. Anyone has any fix for this?

I can confirm I still have dropouts too. Maybe less than previsouly, but they still happen with high-res. Not nice.

do you have any news on this matter? Has Roon identified the problem?
It would be nice to know what the problem is and when you plan a solution.

Thank you for your attention.

It’s probably not roon but chromecast. However maybe roon has more power to make google adress the issue. However i just ordered a hifiberry card to use with raspberry pi so i will throw the cca in the bin.

I have no way of getting LAN to a raspberry pi. Would have to get some form of Wi-fi access point to it. Does it work fine with that?

I find the CCA convenient and like the idea of optical signal so there is no discussion about power supply noise into the raspberry Pi, etc.

I have no way of getting LAN to a raspberry pi. Would have to get some form of Wi-fi access point to it. Does it work fine with that?

I and some others have had good success with Edimax dongles on the RPi - the stock WiFi is dreadful. I use the Edimax EW-7811Un and it has generally been very stable.

1 Like
Entry-level hardware needed and a couple of other things which can be improved
E_Richters (Eric Richters) November 15, 2018, 6:30pm #63

Would you please give us an update?

I am using a cca with a Denon avr x6200 receiver with built in DAC. I’ve tried different optical cables and tried both the cca both wired and with wifi.

My Roon core instance is on a very fast nuci7idnhe ubuntu box.

If I use this box as an endpoint and play tidal MQA over hdmi I’ve no issues.

I’ve got 8 cca devices in different rooms and the dropouts are very annoying. Would you please give an update on this issue and help fixing it?

Thank you @dhusky, I will investigate and give it a thought.

Just tagging in to see if anyone has come up with a fix. Been chasing it from all angles with no success.

As far as we know, the 96kHz dropout issue with CCAs is a firmware issue that was introduced in a firmware update sometime in July. Google seems to know about it, but as far as we can tell by what they’ve said publicly, they haven’t prioritized a fix. It’s a problem affecting anybody trying to do 96kHz output (not just Roon) and unfortunately, I think the most productive thing you could do right now is speak up in Google’s product forums to let them know that this issue affects you (as well as to provide more debugging information for them).

I’m having the same when running toslink optical from CCA into my CXA60. Any news?? Firmware 1.36…
Love the CCA, but the dropouts kill me…

am I better off (as a workaround) to (a) disable MQA when playing through the CCA or (b) using DSP to down sample everything to 44/48?

I came across this thread and it got me thinking about the CCA I use to listen while working on my computer. Per Roon recommendations / Audiophile it’s in worst case territory:

I don’t own much Hi-Res music but I do have 5 24/192 albums that I downloaded from HDtracks so I put them in a playlist and listened to them for a couple of hours. Per the Signal Path: 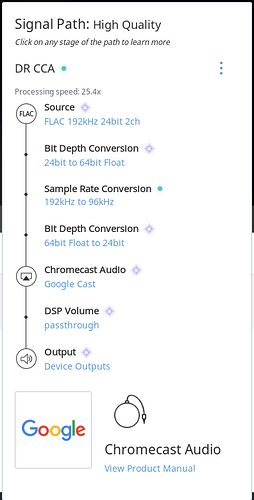 Everything is sent to the CCA as 24/96 and to my untrained 65 year old ears it sounds fine and I’m not hearing any dropouts or other issues I can attribute to a CCA problem.

Are CCA dropouts still a problem?

I just tried it and still get the dropouts on anything over 48.

Chromecast Audio dropouts seem to affect TOSLINK optical output, not analog output. If you are using the latter, you might not be affected.

I have a TOSLINK cable so I’ll test with that. I had tried it previously with a CCA connected to a Samsung soundbar and had audio problems which were attributed ( perhaps incorrectly ) to soundbar shortcomings.

Question. That screenshot you put in this thread, is that from a portable MAC or a a iOS device?

I am asking this because I only get DSP Volume = passthrough on MAC. If I open the signal path on a iOS device I get “0.00db”.

I don’t own any Apple products.

The capture was made on my Windows 10 laptop. I have two Android tablets ( Amazon Fire HD 10 and Samsung Galaxy Tab S ) and I see the same Signal Path on them when playing to that CCA.

Understood. Thank you. I think it’s some kind of bug with Roon on iOS. It does not identify the volume control as passthrough even though is set as that. But Roon in MAC OS shows it correctly.

I can’t belive this is still going on! I’m on my second Roon trial and this is the only thing holding me up from buying in. I’m using toslink now with the cutouts. If I plug into my receiver using the provided 3.5mm I’m assuming my quality will go down??