Yes, I have experienced the same. Chromecast second generation via HDMI works fine. But Chromecast Audio via TOSLINK drops out periodically with 96 kHz. I do think it is a Chromecast output issue, as I seem to recall the Roon music counter not pausing but continuing through the dropouts.

Have you tried using a different optical cable? If you can, give that a try and let us know if you notice any difference.

I didn’t, but it’s a new cable. But my trial is up so I can’t unless I subscribe. 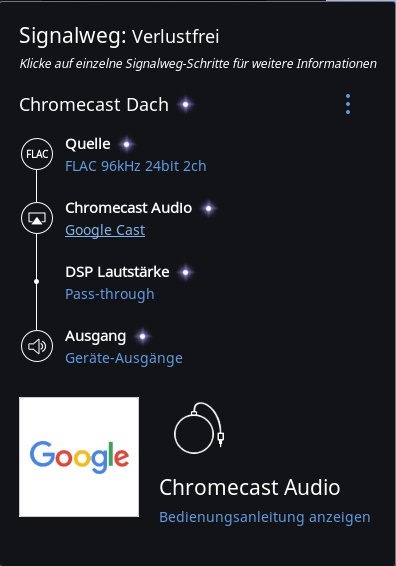 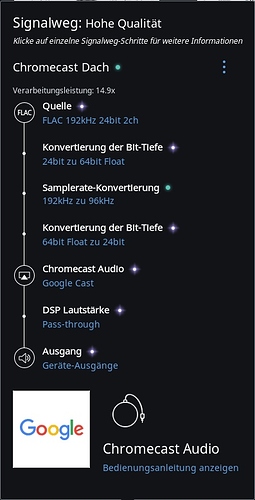 Thanks StereJo, I’m not sure that wifi is my problem but the ethernet adapter might be worth a try. I have no problem if I use the Chromecast Audio’s DAC, the 96k and above work fine that way. The problem comes when I use the Optical cable to connect the Chromecast to an external DAC, but I’ll try to get the ethernet adapter before my trial extension runs out to try it. My plan is to eventually build the Nuc Roon ROCK and use it to stream my music to my external DAC by USB connection to the DAC and that should solve the problem, I hope. Meanwhile I’ll try whatever suggestions I can that might help for now.

I did have 2 other Optical cables that I have tried with both external DACs and they work the same as the original cable I was using, still have the dropouts.

So do I. Just a simple optical cable from Amazon, connected to my DAC. May be WiFi is the problem since the ethernet adapter solved it (for me).

Thats a good idea for sure. I run my RoonServer also connected via USB-cable to my DAC, the sound is great and I never recogniced any problem.

Thanks, I will order it and try it.

I have the same dropout issue. I have the ethernet adapter installed, a van den hull high end optical cable connected to a DacMagic. With the Chord Poly+Mojo combo no dropout at least up to 192khz, I have not tested it above. Is the dropout a Google issue ? I hope Roon can have the problem fixed because this device is so useful.

Is the dropout a Google issue ?

I think so. But dropouts occurred only with 96 kHz and WiFi. With 44,1 kHz I never had Problems, even with the WiFi connection.

I hope Roon can have the problem fixed because this device is so useful.

It is really a useful device. Even my old kitchen-ghettoblaster runs (thanks to chrome audio) on roon

The Ugreen Ethernet adapter didn’t solve the problem for me, still get the dropouts with it connected by Ethernet.

I’ll have to try that a little later, but what I did last was put my notebook by my audio system, installed the Roon Server on it and connected it by usb to the OPPO’s usb connection and that works perfectly over WiFi… leads me to believe it has something to do with the optical connection on the Chromecast Audio. But I’ll reconnect the Chromecast Audio by optical a little later and let you know what time the dropout happens.

Thanks for trying to solve this.

Ok, the Chromecast Audio was connected by Optical cable and had the first dropout at 2:02 pm CDT.

I’m getting the same problem. Music plays fine for about two minutes then hangs. Much the same feel as when my aging Roon core can’t keep up with the upsampling I’ve set it and runs out of buffer (it can manage DSD 128 just about but not 256).

Hence me thinking it could be a core issue (ie not enough horsepower, not a Roon issue per se). I could well be wrong given what others are experiencing though.

My CCA is going optical into a Meridian F80. Sounds great when it’s working.

edit it works fine via its internal DAC

I am new to all this, but I can report I have the same problem.

I have Roon Rock running on a NUC7i7, wired to a UK BT router version 5, and then wireless to ChromeCast Audio (I have tried 2.4Mhz and now its on 5Mhz, cannot precieve any improvement). ChromeCast is linked to a TAG AV32R pre-amp by optical connection.
Both 96khz and 192khz (which Roon downsamples to 96khz as expected) ALAC files, show dropouts randomly when playing. Same song can play with or without dropouts. I have tried to reduce activity on the network as much as I can (turn iPhone and iPad to plane mode), but I still have events from time to time.

The team is continuing to investigate this, and I was hoping to get some additional information to help out the team. First, please describe your network configuration/topology, including any networking hardware currently in use, so we can have a clear understanding of how your devices are communicating.

Just to verify, are you able to play the same content to these other DAC’s when not using the CCA without issue?

I have Spectrum internet, Google WiFi router connected to CCA by wireless and the same content plays fine without the CCA in the mix going to my laptop as the roon server connected by usb to the OPPO BDP-105 USB DAC over WiFi.