They say a Picture says a thousand words, here are 2

In “Another Product” I manage box sets with 3 custom tags

this example is the Sony Bernstein Centeray issue which collects the CBS recordings, each od which was an actual album. Included in each CD Folder is the original art work 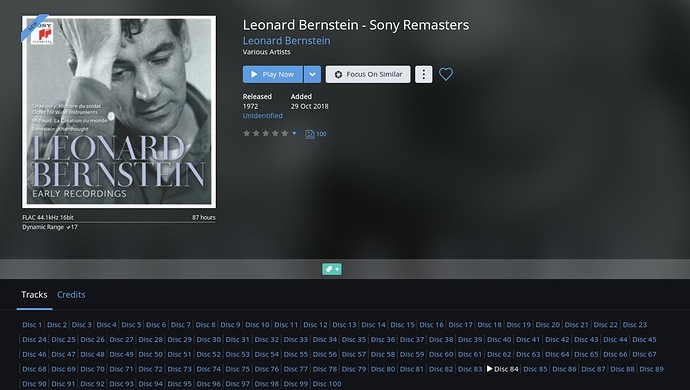 A N Other Product

I normally have the art work 5 “covers” across , I showed more for effect

In a straw pole, which of these 2 views would you use to better navigate your extensive box set collection , I reckon I have upwards of 100

You can see why I often comment of using an alternative to Roon for classical. Roon is magic for album based Rock & pop etc but a bit frustrating for classical (at least to me)

I’m not suggesting this is a solution, I am just as despairing of a proper box set solution as anyone but you can do a lot of what you are doing in JRiver and still stay in roon. I have several Bernstein box’s but not with me whilst travelling so I cannot give a direct comparison. My box’s (in roon) look like this: 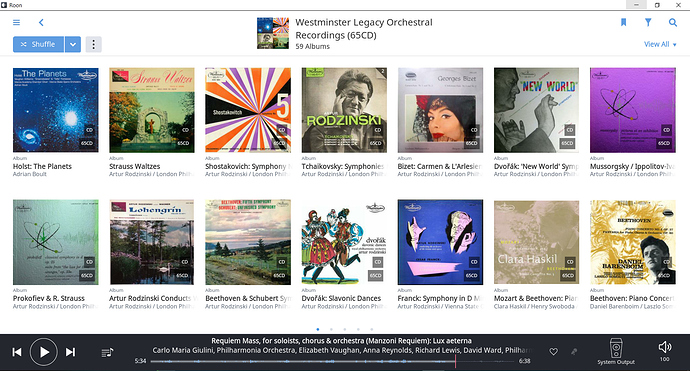 To do that I identify each album separately and then just group them under a common tag as here: 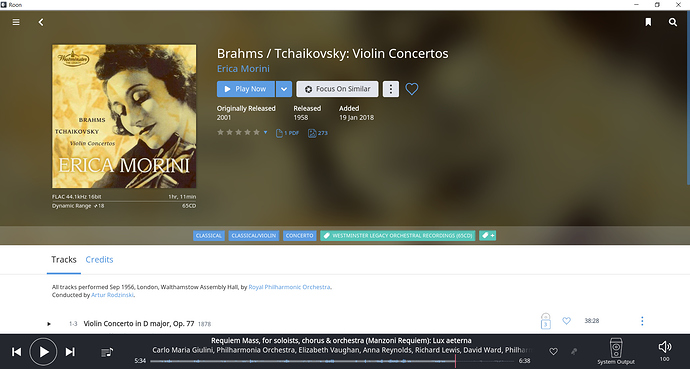 I also create “volume” hierarchies with roon tags to further segment bigger boxes. It’s not ideal of course. It’s a lot of work and the biggest issue is where the box departs too radically from the original jacket releases. In those cases I just break the box up into 10 to 20 discs in “virtual” volumes retaining the roon Disk 1, Disk 2, Disk 3 etc. format. Personally I have given up holding my breath for a proper box set solution so this is what works for me.

I do that as well, I tried that approach with the Bernstein set but most of the individual CD’s aren’t ID’ed

Yes you can get to look nice in a Tag but that as you say is a lot of work . I named each CD CD01 - Album Name etc and the discs split off into individuals on input.

With that amount of work on 100 discs I may have well done it in JRiver. There must be a better way.

This set is a mess, the big Karajan ones are no better . We are back to iffy metadata

I am not likely to bin Roon over it but in the Lanacashire phrase “Them as don’t ask don’t get” , lets for get the second line “Them as asks don’t deserve”

I just repeated the import with CD01 - Album Name etc and the Disc # set to 1 , quite a few ID but not all by any means . The hard work was done yesterday with Compositions & Parts

Yes, it’s way too much work. My experience with that particular Westminster box is that I managed to id about 60% of the discs. The main purpose though was not to get the individual CD id’s but just to have a visual navigation of a favorite box. It might help others.

A great shame box set handling has such a low priority for roon. I guess at the end of the day it’s only an issue for a handful.

It would be nice if one could group together albums in a box set, and have the option of either displaying albums individually on the album view, or grouped under their box set. If grouped, clicking on the box set could open up a second album view, instead of going to the disc view as is done today with merged discs.

You can do it using a Tag (Roon Style)

Using tags is possible, yes, but the type of solution I was suggesting would be much better.
I some cases, box set discs do not relate to original releases - it depends…

To me the most critical part is the ability to annotate each disc in some way. Disc 1,Disc 2 etc just doesn’t help

Take set of Beethoven sonatas, they will probably not relate to an original cd, so how do find a Sonata you want ,

In the Collection of albums example it’s easy, display the album name , in the Sonata set you need an editable label the album name will be the same for all 10 disc , Beethoven: Piano Sonatas

This is the missing link , excuse the pun …

Yes, that would address the case when multi-disc sets are not composed of existing CDs, and would be an alternative for box sets.

This has been suggested here: Disc title in multi-disc sets

We can only hope, the Box Set debate,indeed the classical debate has been held many times

Or use an alternative, hence my initial screenshots ( as Tony suggested from my JRiver library)

Classical navigation is a big downer for me, only just outbalanced by the good bits

This is true for all box sets, not only classical. We can hope that it is still on the list for consideration, but I cannot recall any of the roon staff actually commenting if this is even feasible. It appears that roon depends on the data provided from their partners and they do not have this?! Just wondering how other, read competitors, are solving this.

That’s how I handle in in JRiver, a box set is not a “native” entity

That’s why an editable label would be good