Merging discs in a multi disc set is a good feature, but one loses the disc title. It would be nice to have the possibility of labelling discs within a set.

I have this collection of Duke Ellington, for example, where each disc corresponds to a specific theme: https://www.discogs.com/fr/Duke-Ellington-ANNIVERSARY-13-VOLUMES-BOX-SET/release/7759958

Here is another example - Sviatoslav Richter’s Complete DECCA, PHILIPS & DG RECORDINGS (EDIT: this is actually a box set - there is a seperate topic on boxsets)
https://www.deccaclassics.com/fr/cat/4786778
Each record has a title, which is lost when I merge them together.

There does not seem to be a way to edit a disc, once it has been merged within a set.

This has been raised several times

So it is possible to “reconstitute” the original Cd, it adds loads of Albums but you retain the album, the Richter Set is one of them

If the discs folder is named CD01 - Album Name , Roon doesn’t merge them automatically, CD01 it will, Anything after the CD01 Roon treats as a new album

Well, that is precisely what I would like to see improved upon…

A specific disc tag in Roon would be great. Ideally, when you merge albums together, then the individual discs should keep their original title, or be editable.

Here is an interesting article on this topic: https://www.blisshq.com/music-library-management-blog/2018/03/27/lamentable-state-disc-title-support/

I actually was not aware of the DISCSUBTITLE or SETSUBTITLE tags. It would be great if Roon could just display that tag above the track list. Even better, having the option to display the discs in one screen, grouped by disc title, and not in seperate tabs.

Here is an example of how I have it set up in Tonal. notice the label under the disc number… 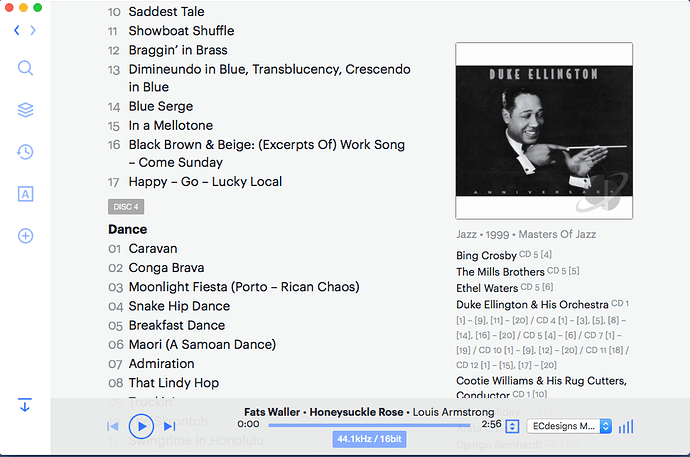 This is a much needed improvement imo

The album art should change with the disc selection as well.

If the art sequences then I can flip through the art to see the disc info. Worst case all the discs have all the art from the box and I flip through it to see what each disc contains.

The name of each disc as shown in post above is desired.

I really would like to see this option too.
It would serve different scenario’s, like Box-sets and possibly series.
This way it would be also easier to categorize special, deluxe releases. As an example the new Beatles (White Album) release. You would be able to “name” it as folllow:
disc 1& 2: 2018 MIx
disc 3: Esher demo
disc4 to 6: Demo’s & Outtakes
That way it is easier to select what you want to hear.

I agree with all of the above, have requested this 3 years ago (and have mentioned it a number of times since) and remain very keen on improvements to box set handling and the ability to group albums in similar ways:

Lots of compilations have both disc number and disc name (e.g. “Disc 1 - beach; Disc 2 - club”). Roon seems able to sort albums by disc number, but I see no option to include the disc name. I have a tag in all my music files called DISCNAME which is populated with the disc name if there is one. Would be great to have this functionality. Thanks

There’s been a lot of talk regarding better handling of box sets. I’d just like to add ‘series’ to this theme as well. For example, there are many CDs that are released separately as a series though are not necessarily part of any boxed set. It would be good for Roon to allow the user to group these together as a series, in a simlar way to the box sets. So when browsing in album mode or on the artists’ page, the series (or box set) would appear as one item - which when clicked, shows all the al…

I decided to make a list of my feature requests which are still outstanding. I realise that this may be duplicating some individual posts I have already made in the request section - but I thought that it would be useful to list the requests I still have, in my order of importance - at least it will be useful for me to remind me what I’m still looking for

And of course, I’m very happy with the progress so far. So, my top requests, in my order of importance: 1 - Incorporate other album…

I have a large-ish music collection (~5500 discs), all inside Roon. Quite a few of these are inside large box sets (~100 discs in 1 set). Roon detects these box sets for me with no problem. But the GUI for browsing and discovering music in those box sets is very cumbersome. Here is what I see for my box set for Yo-Yo Ma’s 30 Years Outside the Box: [image] Hmmmm. I have no idea which music is on which disc (unless I dig out my physical box and its liner notes). I usually end up randomly click…

Hi, I have several CD box sets where every CD in the box has a different cover. At the moment it seems like there is only one cover possible for all CDs. A solution where I can put a cover for every CD (eg Disc 1, Disc 2, Disc 3) would be really great. Will this be possible code and data-model wise? The pictures are in my tags, so discnumber 1 of totaldiscs 3 has a different picture than discnumber 2 of totaldiscs 3

It would be nice to see the metadata for individual albums that are now sold as boxed sets. I suppose this happens often with older albums, but look at Haitink’s recent Beethoven cycle. The CD’s were individually sold, and a few months later they appeared as a box.

I’d like to have ability to add title label to media /disc and see that in album page. This would be useful especially for boxset. For example Taste- I’ll remember boxset have disc 1 titled "taste, Disc 2 “On The Boards”, etc It would be useful to have that label showed in tracklist, aside or under disc # for example, so that you’re able to know the title/label of disc you’re browsing and not only tracks within. …

I saw some of those and have been surprised this wasn’t addressed over the years.

I am following the advice of having no expectations of Roon improvement and adopting to what is available. Any improvements are then pleasant surprises.

I have been putting pictures of the box backs and pages into rooon and viewing the pictures for info on what is contained in the box.

It would be nice to either edit or add the release review for these new Super Deluxe boxes. White album ultimate has an AMG release review. The same old original album review is not a good use of the text space in Roon.
Another reason I find myself adding pictures of text to Roon

I haven’t seen this posted elsewhere (if so, sorry) but a crappy workaround for Disc titles is to use the Location tag for all tracks in that disc. The title gets a “All tracks performed” prepended to the title but it does work in a pinch.

Is this a feature that will never see the light of day? Has Roon ever addressed these requests?

I find it amazing that nothing happens with these issues that has been raised so many times over so many years and that are really important for organising music boxes in Roon.

@Elling_Jacobsen yes, I’ve seen that sentiment expressed numerous times throughout these forums. Many users have been crying out for a few relatively small, simple and essential changes (simple to my mind, but I’m not a programmer!) to the Roon interface and capability for years, with no apparent acknowledgement from the Roon team. This is obviously disappointing to long-term subscribers (myself included). There have of course been some good updates and I understand that the Roon team has to prioritise their developments, though we’re talking years now where these requests have been reiterated repeatedly by a large number of Roon users.

As long as Roon only uses automated data sources, this will likely never happen. Its a shame – I have been requesting these changes for years, but Roon never answers or considers alternatives.

Depends what you mean. It will perhaps not happen automatically via scraping, but it should be possible to have this metadata which the user can populate. The metadata tag for it already exists after all.

All my box sets have 3 custom tags set

BoxSet ( name)
DiscName (sub title , disc etc)
DiscVolume ( for sets like the Beethoven Edition where it was released as 20 Volumes)

Reading these would be trivial , and a minor mod to the UI

Unlikely in my lifetime

A maintenance nightmare but it works for me …

I wanted to bring this issue up again.

Is there any roadmap to introducing this? This is probably my single biggest issue with Roon right now and I used it daily.

For example, the David Bowie CD box sets have 11 discs. I can’t remember off the top of my head each time which disc is which…so I have to go retrieve the box and actually look because all I can see in Roon is ‘disc 1, disc 2’. Ok, first world problems - but it is a usability issue.

Roon - is a feature improvement here really challenging to implement?

Roon - any update on this? Is this planned at all? Is it particularly difficult to introduce (the ability to edit a disc label - doesn’t sound like it should be, but perhaps it is?)

I’d really like to understand the situation on this. I have a Lifetime license so I’m a committed supporter of the product - and this feature would really be a plus.

This has been a request for around 5 years , I have been using Roon for that long and it was one of my initial gripes.

That’s a shame Mike. Not sure why it’s so hard for them to comment on something like this

They comment on very little to avoid “expectations” that later don’t materialise, sorta understand , say nothing no one’s disappointed