I have several CD box sets where every CD in the box has a different cover.
At the moment it seems like there is only one cover possible for all CDs.

A solution where I can put a cover for every CD (eg Disc 1, Disc 2, Disc 3) would be really great.

Will this be possible code and data-model wise?

A typical problem case is “Original Album Classics” from Molly Hatchet, there are five albums in there that all have own covers.
If I cannot put a cover to a disc but only one cover to all I don’t know which album I am playing at the moment. Of course I know but I cannot see it anywhere.
The only way at the moment is to split the CD box set into the single CDs and grab them but then it is not the 5CD box anymore in terms of metadata.

@Machine Yes, I have this exact issue when I’ve purchased Complete Album sets from the HDtracks, Van Halen, The Cars, The Doors, Eagles, America. In the End, I split them up into separate album sub-directories on the hard drive so I could get the correct album cover and “Roon” information about the individual album. I used the Version section to note the actual Collection name. See Example Below. A bit of a pain. But, some albums, even still did not get recognized and even though I’ve identified them through the software there is no Roon information for them (but that is a different post). 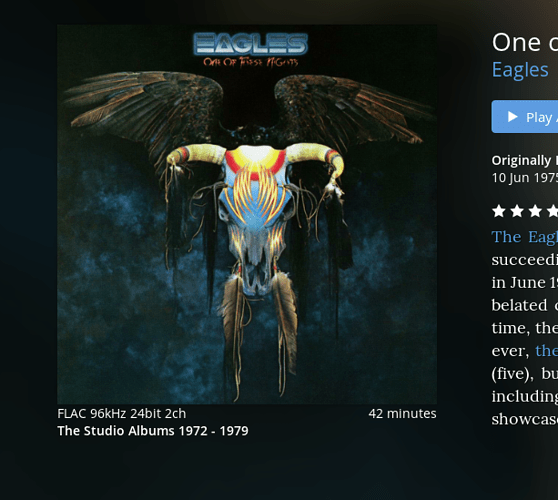 A bit of a pain

You name it. Although this is no neckbraker I won’t do that if there will be another solution to it, like I asked for. Roon is constantly evolving, so we see what will happen.

EDIT : btw I have some boxes where there are no single releases and they also have different covers

Really keen on this too. I asked for the option to show disc names in another post, but showing the individual disc covers/artwork (e.g. for those in a box set) is really important too!

Also, would be good to have the ability to group albums by series also. Sometimes, albums are released separately but together form part of a series - this is different to a box set. Good if Roon can incorporate this also.

Or even as a series collection - e.g. the Cafe Del Mar compilation series - there are a whole bunch of compilations, and offshoot ones called Cafe Del Mar - Dreams, and others. Would be great to be able to group these all together under the Cafe Del Mar Heading, and then have sub-groups for the sub-collection, if this makes sense