It’s been said before, Classical Metadata is a mess

No where do we see comments from Roon representatives as to their commitment to sort Classical music , I must assume there is none

In my view the only way it can be sorted is if the quality of metadata on Rovi / allmusic improves. And that would require a commitment by Rovi that change requests from Roon get fulfilled in time. I am sure Roon staff communicate the change requests to Rovi, but whether there is any priority at that end to improve the quality of the metadata is a different question.

Past performance would indicate no will to change

Not sure where the disconnect is though

@andybob - please feel free to move out the conversation about the future of classical metadata if you think it doesn’t fit into the constraints of this particular request collection.

Past performance would indicate no will to change

When it comes to being made responsible for the data quality you may be partly right. It’s probably not in the Roonlabs playbook to provide correct (classical) metadata themselves. To be fair the Roonlabs team put notable effort into solutions which make things better as relying only on allmusic like:

But then getting (classical) metadata right isn’t a job Roonlabs should put on its todo list at all, I believe. Continuously communicating the need for it within the industry (and providing evidence that one can make money out of it) and as an alternative path supporting (community) efforts to make things better should definitely be on the agenda.

For instance I’d be wishing for a more thorough (deeper) scan of what musicbrainz has at times to offer - and thereby also encouraging interested users to enter “deep” data at musicbrainz (instead of providing corrections to the closed source allmusic data pool).

I agree, the will I was referring to was Rovi not so much Roon, Roon doesn’t do badly considering

I indirectly use MusicBrainz by using SongKong but in the same vein MusicBrainz isn’t perfect .songkong is good if it can find a matching release but if not makes more mess by matching individual tracks so I always work offline on a copy before dropping back into the main library watched folder

I think with some discrimination in software MusicBrainz could add an extra string to the bow. There was talk of a Roon version of SongKong , currently MusicBrainz doesn’t match Rovi doesn’t match Roon for Composition nameformat for example, nothing that Tricky String manipulation couldn’t fix

Didn’t mean to sound negative, Roon does an excellent job with the tools it has , as I ever I want more … there are loads of examples where things could be better

Maybe we should all send a petition to TiVo / Rovi. I fear they don’t really care though.
Still, I think there is stuff in the Roon ballpark that can be improved.
Why a compostition whose tags are exactly (copy / pasted from) allmusic is not identified, eludes me. 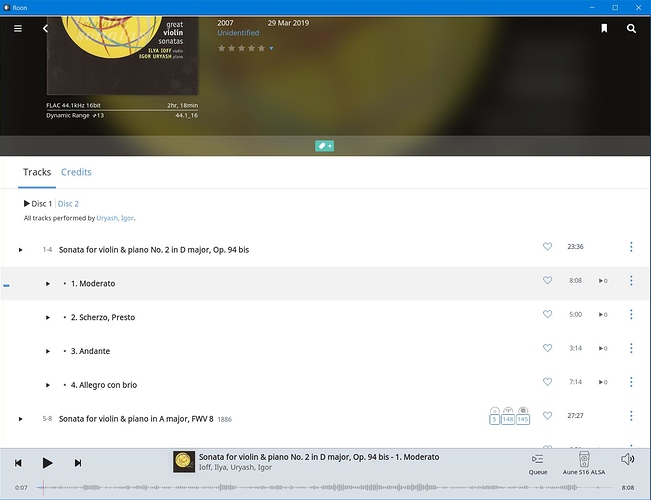 The next two compositions are identified correctly , just not the first one by Prokofiev

Is Prokofiev tagged as the Composer? Don’t see his name on the Sonata #2.

the album has no Genre set, I guess the composer would show as soon as the genre is set to Classical.

Apart from that I do experience the same with compositions.

When this happens to me I just add an album roon can identify. It doesn’t seem to be “sticky” though. If you add a version you don’t really like just to get an id and then delete it then roon just takes you back to square one with no identification of the version you do like.

Thanks guys for all the tips

the album has no Genre set

The Genre is set in jRiver. Does Roon not import the Genre if it is set in the ID3 tag?
Anyway, I have now set the Genre manually in Roon and this is what it looks like 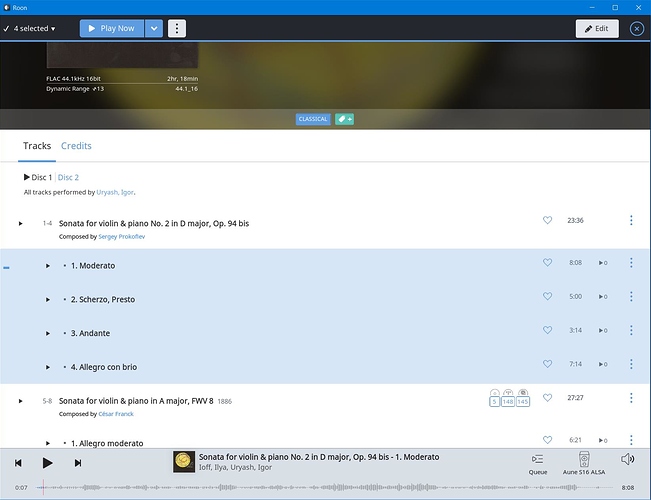 Roon.jpg1639×1257 104 KB
Composer is there. The Composer in my ID3 Tag is actually “Prokofiev, Sergej”, however I find that that Roon is good at fuzzy matching to its own composers. Kudos to Roon team for that.
I have also tried adding an album from Qobuz to my library that contains the composition, but Roon still does not find it.
BlackJack March 29, 2019, 11:57am #12

Does Roon not import the Genre if it is set in the ID3 tag?

Depends on your import settings.
https://kb.roonlabs.com/Genres

Ok, got it, thanks

You still don’t have the composition linked to metadata. You can tell by the absence of a composition date (usually) and the little album icons out to the right.

As Tony said above, you now would need to import a TIDAL or QObuz album with the sonata on it.

As Tony said above, you now would need to import a TIDAL or QObuz album with the sonata on it.

Did that, but it didn’t help.

EDIT:
I have now taken to extreme measures and changed the composer in the ID3 tags (not just in Roon) of the four tracks from “Prokofiev, Sergei” to “Sergey Prokofiev” and Roon correctly identified the composition. 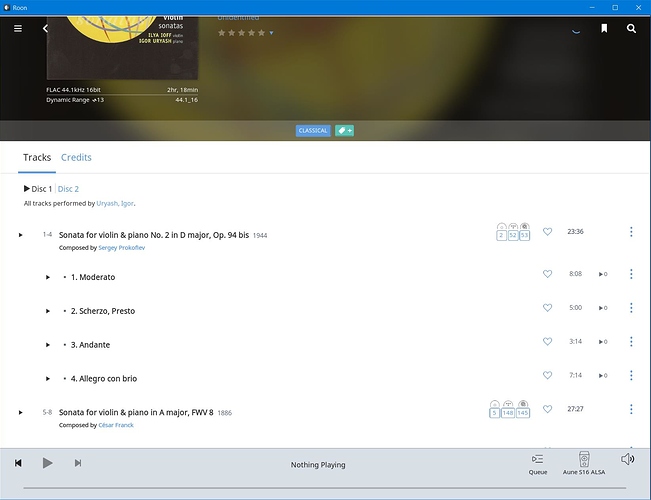 So now I am faced with the decision whether to change all artist and composer tags in my library from “Lastname, Firstname” to “Firstname Lastname” with the consequence that sorting in Windows Explorer, jRiver etc. will be by first name.
I really wish, someone at Roon would take a thorough look at the way classical tags are handled.

Well my experience has been that Roon does not munge composer’s names very vigorously. So I was surprised when you said it had successfully translated ‘Prokofiev, Sergei’. The KB on Tagging Best Practices is useful, except of course, when you’ve already tagged your library once.

You can make bulk Roon edits of your names to First/Last, and keep JRiver Last/First. I can tell you that Roon is not impressed with JRiver as an exemplar, so I doubt they will head in the direction of making them compatible.

As for the future of classical tag treatment, I’m slightly optimistic about some improvements in metadata next cycle. Maybe not the whiz-bang eye-popping improvements I might hope for, but some changes. Hang in there.

Thanks for your support, John. I will look into bulk editing.
Re the composer tag, I had indeed only changed it in Roon and Roon then created a separate Artist “Sergey Prokofiev”, different from its own Sergey. So it couldn’t make the link.
Just to test, I have changed the ID3 Tag back to “Prokofiev, Sergei” with jRiver and the composition link in Roon has disappeared. So it is clear where the issue is.
I’ll keep watching this space.

P.S: The bulk editing thingy is actually not that bad, thanks

Bit of a slog but that gets everyone what they want , Roon Sees First Last. Also from a maintenance point of view each new album needs correcting

SongKong is worth a look if you haven’t and are Windows ($31) , I believe Apple has Yate as an equivalent

That’s what I would expect to see. First an identified composition in an identified album and secondly a first name / second name convention following Americanizations of composer / artist names.

In general Russian composers are handled very poorly in roon. I don’t know what criteria roon is using to establish equivalents but a lot of equivalents slip through the net. A good source is Discogs. Here are common variations on Sergey Prokofiev:

These Russians cause chaos !!

Depends who you believe Wikipedia spells it Sergei not Sergey , who wins …, Rachmaninov And Tchaikovsky seem to have multiple spellings

We need Standards … even if they are wrong they are Standard