Classical Navigation - The need for an Artist "works recorded" section

I think the navigation experience for classical music would be greatly enhanced if Roon had a section that I would call “works recorded” as a working title.

Let me explain, why I think so, based on my experience over the weekend.

I was listening to music in my chair, using my iPad as a remote. Using my iPad, I do not want to type in too many things. I want to navigate with clicks only.

I was listening to a recording by Antal Dorati and was interested in what else he did, so I navigated to his artist page. 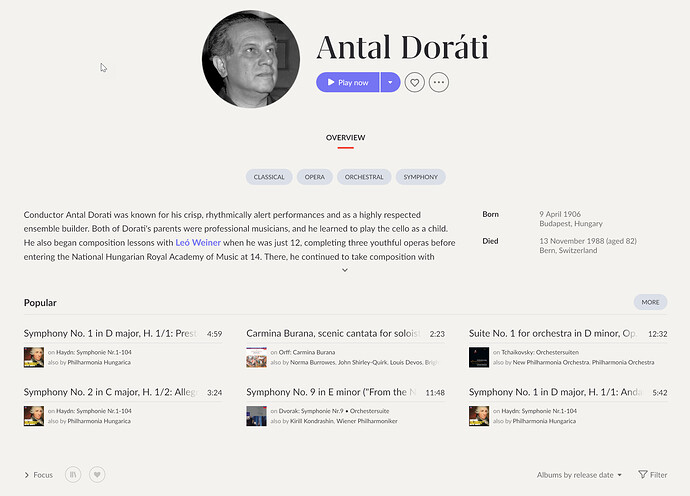 I only see the albums he is credited on and must deduce from there which works he recorded. This is fairly simple for his main albums in my library, which are titled according to the works on it: 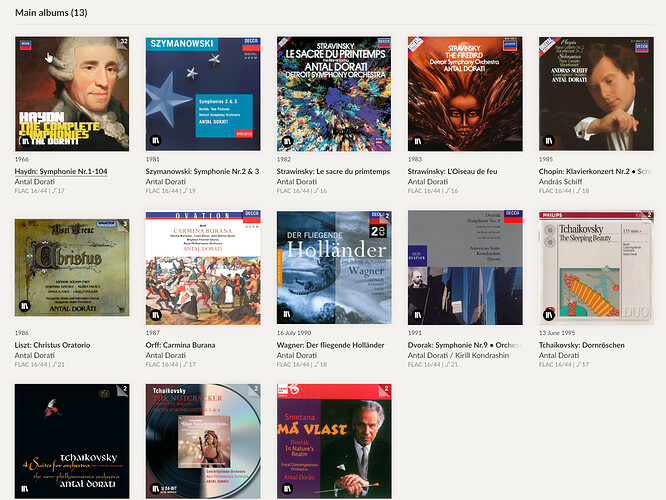 But hey, I remember, that Dorati also recorded a lot for Mercury Living Presence:

I see this box sets too 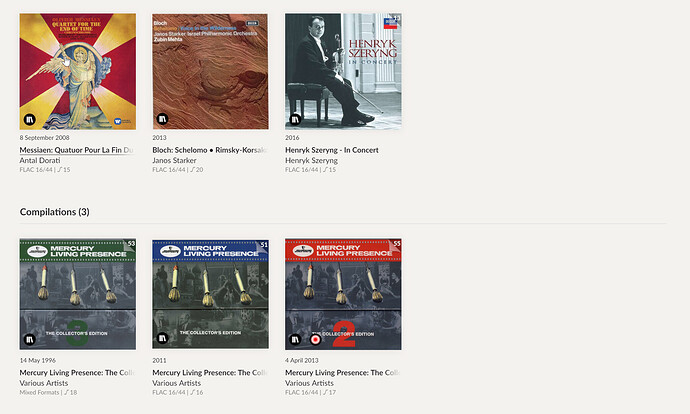 But what work is in which box set. I want to check for Tchaikovsky. What did he record from this composer and on which album. I think this a very common question.

So let’s try the new focus function. There is a focus on the top of the artist page:

Navigating towards the right in the focus section I try to find out, whether the works are displayed. They aren’t. 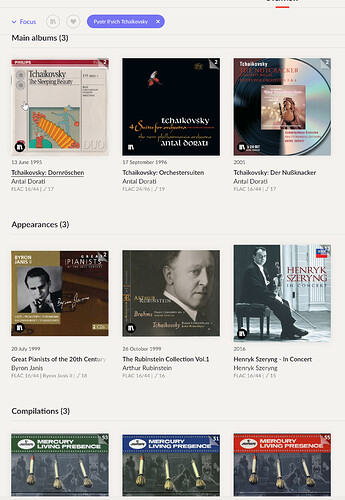 Where are the symphonies? I know, they are on the Mercury Box Sets. But on which? I cannot tell from here. I would need to click on each of them and check out. Let’s click on Box Set 1 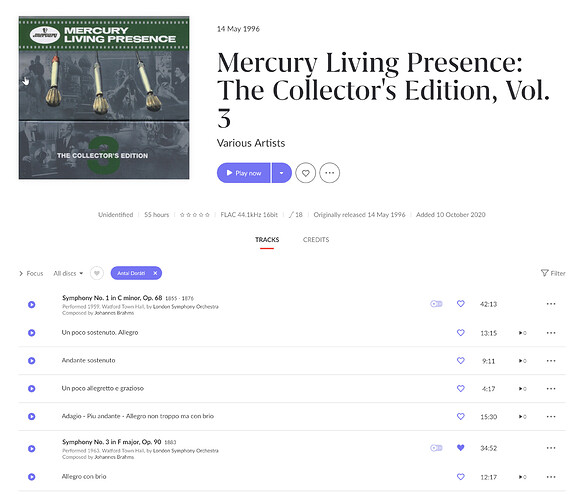 Here I see the content of Box Set 1 with a focus on Antal Dorati. The focus on Tchaikovsky that I came from was lost. In order to find the Tschaikovsky recordings from Dorati on this Box set I would need to use the filter. I don’t like typing with my iPad. But I will do: 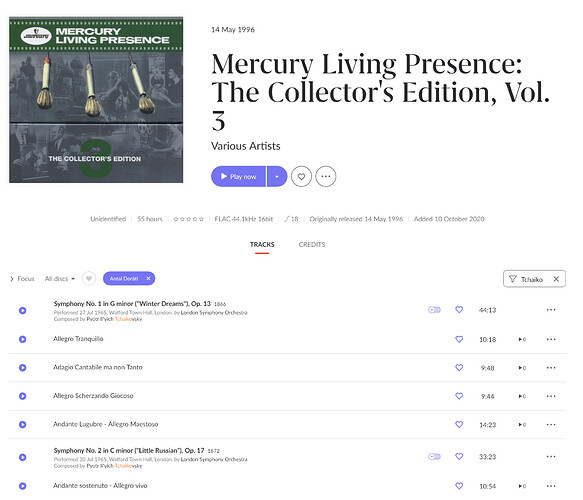 There we are. I could have also used Focus, but there is still a bug. It does not show the compositions:

That was easy, was it? (Sarcasm) For the other Tchaikovsky recordings, I would need to repeat this for the other box sets.

Can I get there somehow? Yes. Is this user-friendly? I don’t think so. 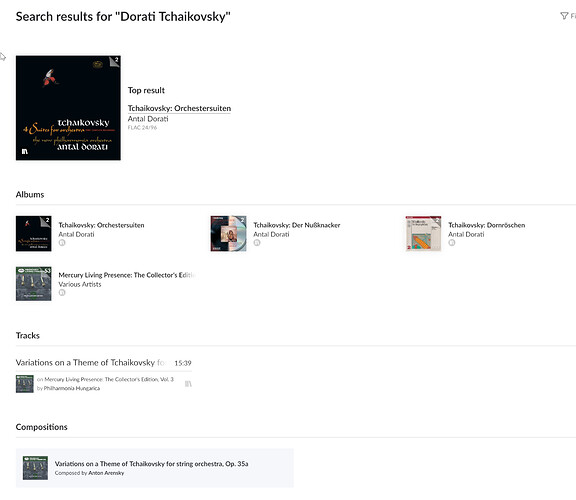 Not very helpful. Does not even find all of the 9 albums I was able to identify using the artist focus.

I do argue that this kind of search/navigation use case is very common for classical music lovers. But it does not seem to be supported very well. It’s also a good example of why Box Set navigation is still not there where it could be. The connections are all there, Roon has the information. But it makes it hard for the user to leverage it.

So why not add a section to the artist page called “works recorded” that shows a composition list for the compositions (not albums) the artist has been credited for? I don’t think in terms of album/artis combination very much in classical. It’s much more Artist/Recordings of Works.

For those of you who will now show me alternative ways of getting there. Thank you in advance. But I would be interested to learn from you, whether you feel that the workaround you propose is really an argument for using Roon over any other library manager. I can get this result with JRiver in an instant in terms of track searching. But that’s not the experience I’m looking for with a piece of software like Roon.

What are your thoughts?

Here is a good example from the Arkivmusic website. Of course this only leads me to complete albums they sell, but it is what I was thinking about: 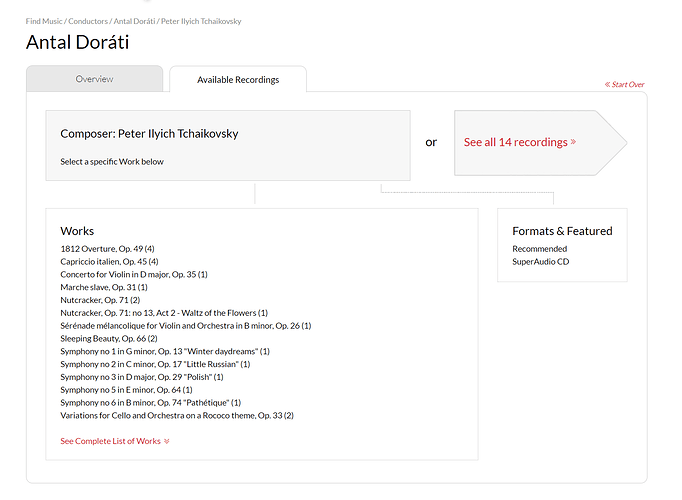 Have you discovered the “view recordings” option in the Overview (and/or Discography) page focuses? 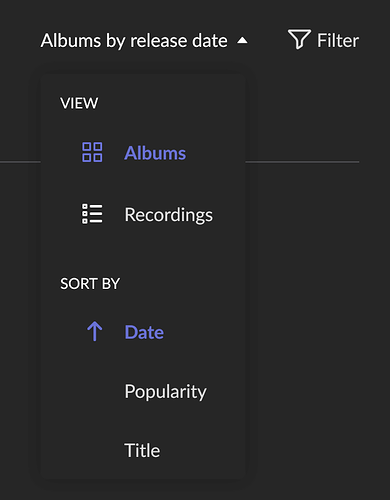 I hadn’t seen this. You hid it well…

Then I take back what I said for the time being and reinvestigate.

I thought I’d read all announcements of new functions with 1.8 but I might have missed this particular function.

I guess the reason I am not seeing all recordings in this list is because of a bug in focus? I had reported one in the beta section and flagged you yesterday since I did not get any response on it for two weeks. 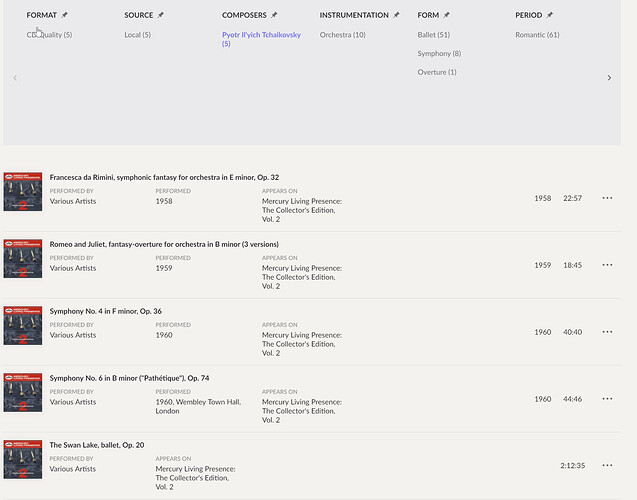 It’s showing only recordings from one box set. There are more hits for Tchaikovsky and Dorati in my library. 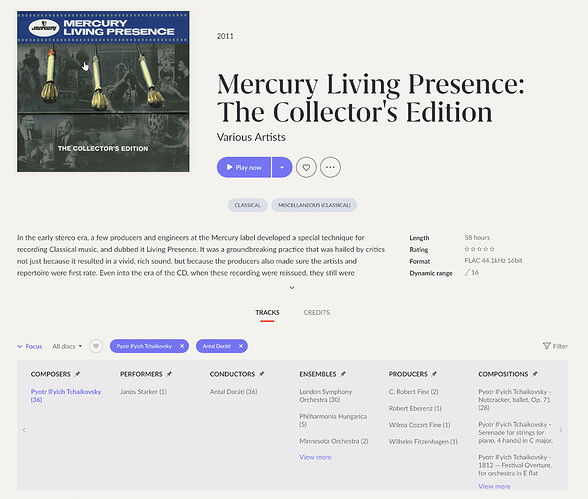 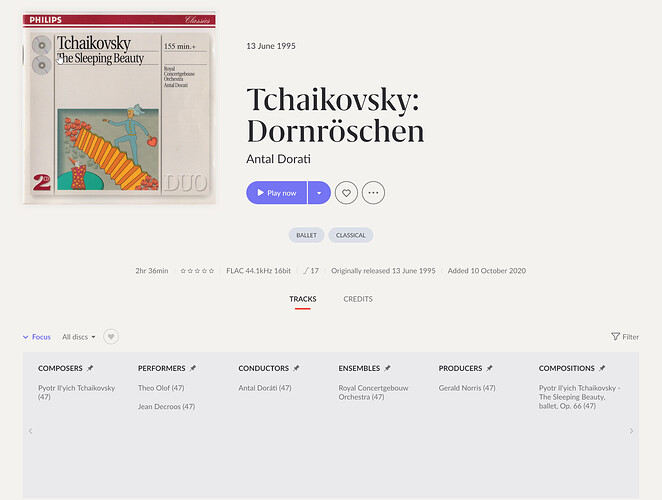 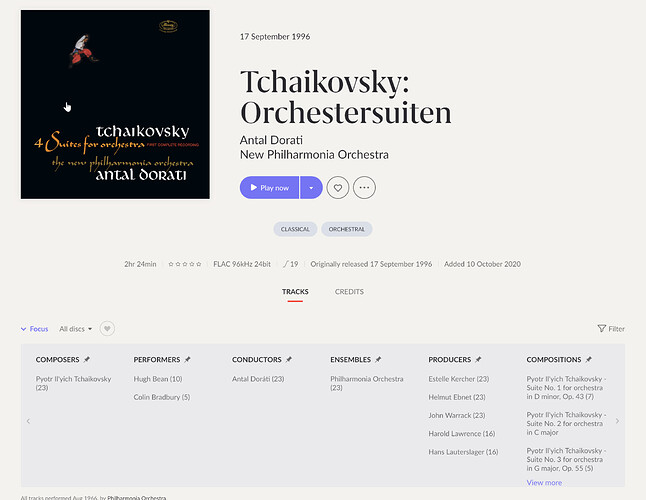 For this album I don’t see any compositions in focus, even if the compositions are all identified on the album: 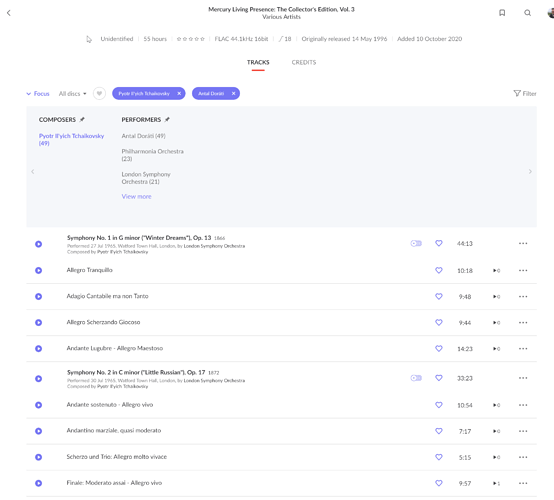 I see only 5 recordings using this functionality, although I have many more.

There is something wrong with this “Recordings” view. 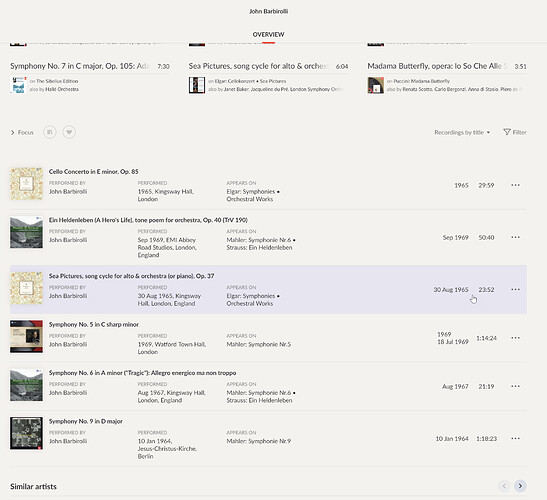 versus what my file tags telling me I have: 77 works on 29 albums 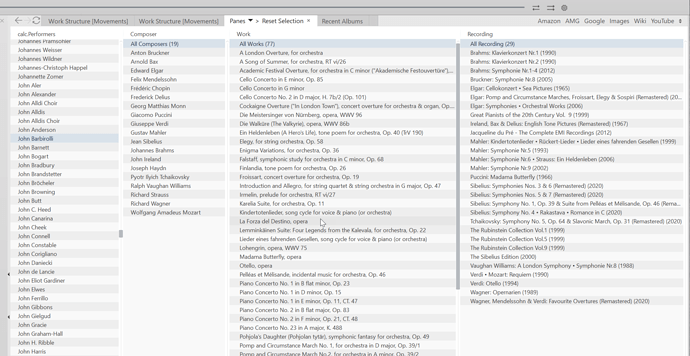 Switching to the “Albums” view I get 21 albums plus 8 appearances. There we have the 29 albums again. 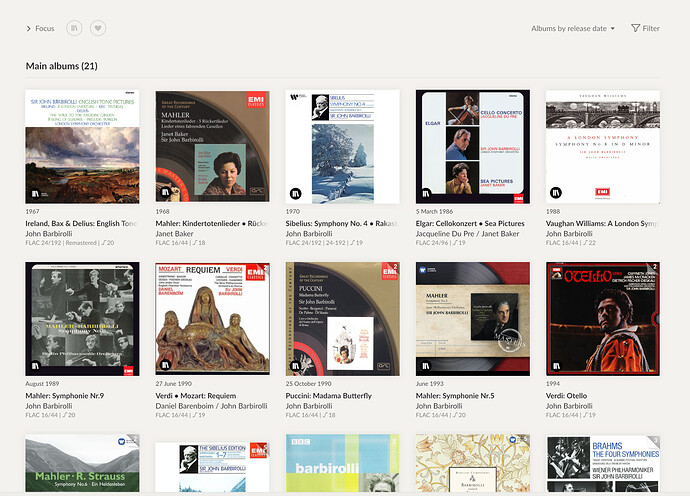 Lots of things seem to get lost when switching. What do I miss here?

Focus is not my area… Rest assured that everything is being read though, even if we can’t respond to it all.

Is this another Composer Performer thingy ?

Can’t really say, since I did not check with Qobuz being active (I will abandon my subscription again). Dorati is no composer within my library.

Same was happening with Barbirolli. Don’t know about him, either.

Was tryring to look for conductors with recording lists big enough but not too big.

Skrowaczewski is another example. Only see his Beethoven 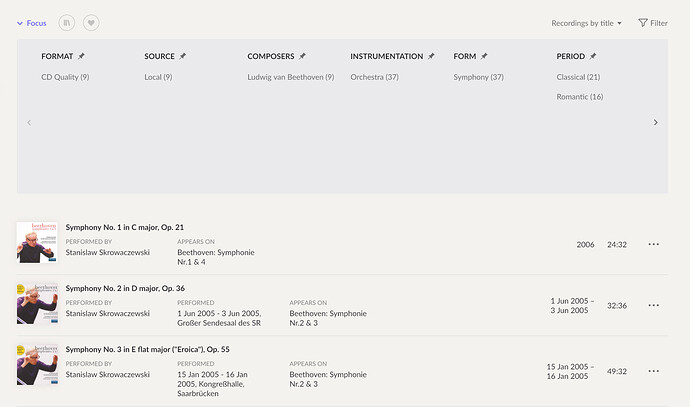 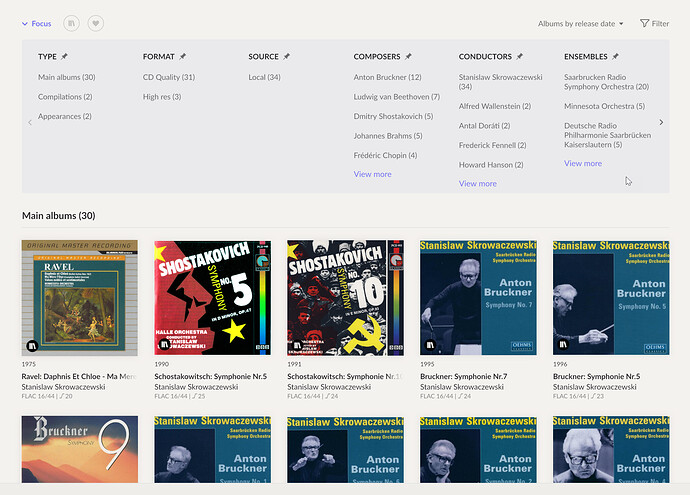 It’s when a performer is an arranger say in Transcription, Kempff, Cadenzas etc, they go missing as a performer

It’s when a performer is an arranger say in Transcription, Kempff, Cadenzas etc, they go missing as a performer

Yes, I know that. It was one of the things I had discovered during my first hour of “late beta testing”. My trigger was André Previn… I am not sure that this is the same problem, but I may be wrong.

if it were related to the composer/performer problem, why would I have different views of albums vs. recordings in the same section? But that’s all speculation, of course.

trying to find a pattern here… 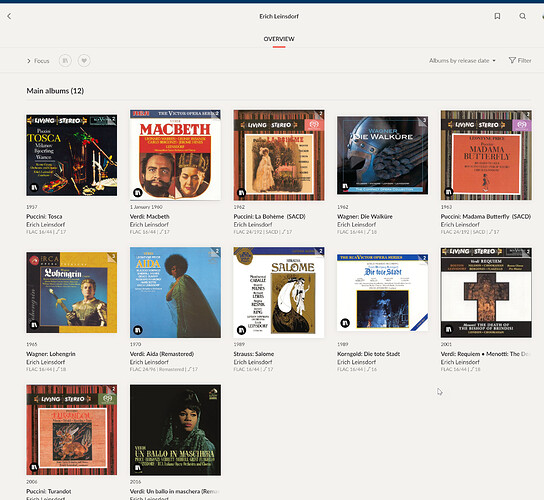 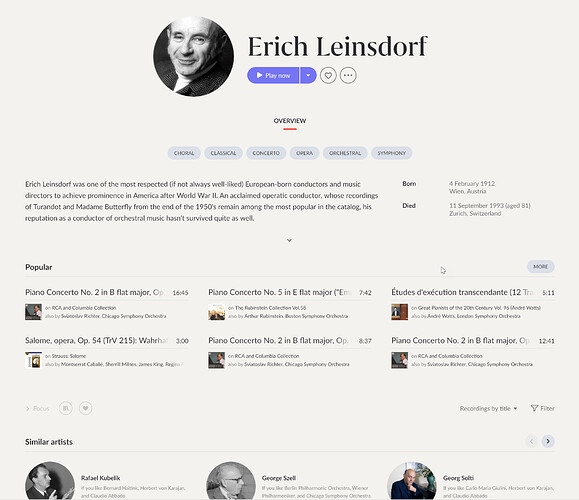 By the way - this Popular section is killing me. Not only is it totally unnecessary in my opinion. But on top of that it kicks in with slight delay, both on my iPad and on my PC, which means that I often click somewhere I don’t want to click, because the screen items have moved in the meantime…

Hi @joel. Similarly to @Klaus_Kammerer1 I eventually found this panel. But it wasn’t obvious, and neither is its operation. A lot of other rough edges surrounding this functionality as well. Shame, because if implemented right it would be very useful.

So, If I use all local/Qobuz and do not filter on library then the compositions are listed out at a part rather than a work level. I have a lot of Barbirolli so this is a very long list like this: 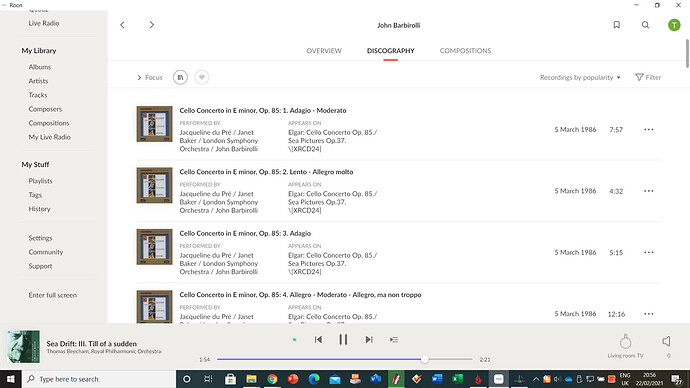 Then if I switch to the library filter I get what I was expecting with a list at the work level: 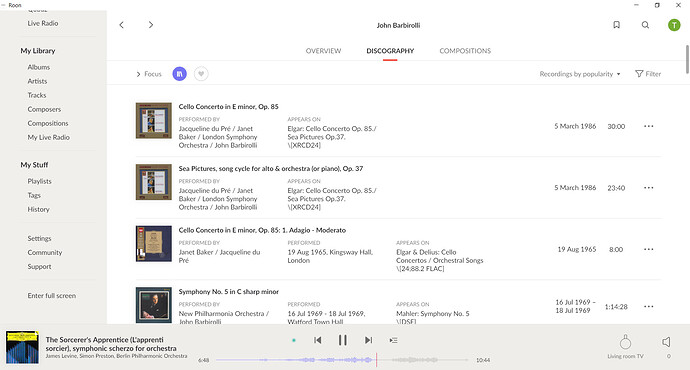 There is another problem. I get line entry duplicates for all my recording “versions” as well. I was expecting to get a line entry only for my “primary” version. 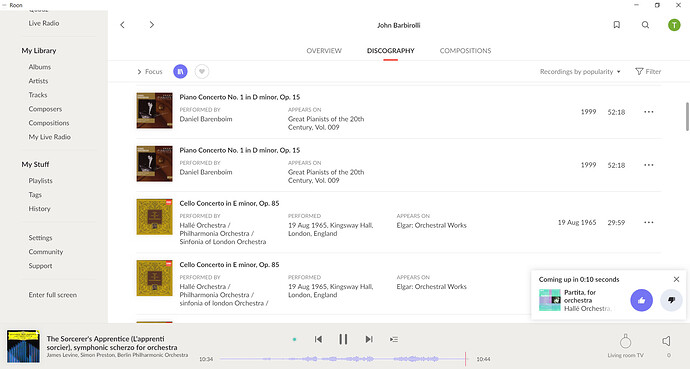 Similar to Klaus, even if these partial and duplicate listings were fixed, I still seem to have a lot of recordings missing. Is this to do with if you have primary artist tags set or not?

Is this to do with if you have primary artist tags set or not?

I don‘t believe this is the reason. I‘m missing on lots of my Dorati recordings from albums where he is primary artist while some show from one box set where there are „various artists“. But not from all… I try to find an obvious pattern but without success.

Hi Klaus, Just curious at what tagging software you use, the screenshot seems quite complete… Thx Regards,

I am using JRiver Media Center for my tagging (sometimes I also use mp3Tag). I’ve been using it for about 15 years now and it is extremely helpful for mass tagging. It allows custom views, custom tags, drag and drop tagging as well as an expression language that helps modifying tags effectively.

It is my personal swiss army knife. Unfortunately it has never developed its GUI any further. It is also very bloated with functions beyond music file tagging (videos and pictures). Lots of people here on the forum don’t like it. I understand why, but it is still indispensable for me.

I too use jriver, it is totally configurable , so it looks complex here but can be very simple

The Pane view is very versatile, click in each pane and you get filtration simply, I have been using around 10 years from when I went digital, a big fan

The arkivmusic example is illustrative of the type of classical navigation roon should provide. the data is clearly there, but the classical experience to date has seems to have been built by folks who have little experience with the genre.

most classical listeners want to hear a Performance of a Work. by far the easiest way to provide this is via drill down search, starting with Genre, Conductor, Composer, or Performer/Ensemble. so:

I built such a system in 2003 for a website that never launched. Arkiv is the heir to music boulevard, who built their drill down search in the 90s. there’s no need to reinvent the (classical) wheel in 2021.

could you maybe pop by the corner offices of Roon one of these days and explain to them how it is supposed to work? They dont quite get it…