Clicks/pops between tracks on specific album(s)

Issue
For the most part playback seems pretty flawless, but I have found a particular album that consistently exhibits clicks and pops between tracks on all outputs. I would have normally expected that the issue would be with the album files themselves, but I confirmed that other players (iTunes, JRiver) play back these files without any pops between tracks. The clicks and pops happen for all outputs/zones, including the built-in iMac speakers, an AudioQuest DragonFly 1.2 DAC (tested in both exclusive and non-exclusive mode), and a Raspberry Pi running RoonBridge with a USB DAC. My primary listening device is the DragonFly, so I’ve uploaded screenshots of the the settings I’m using for that. 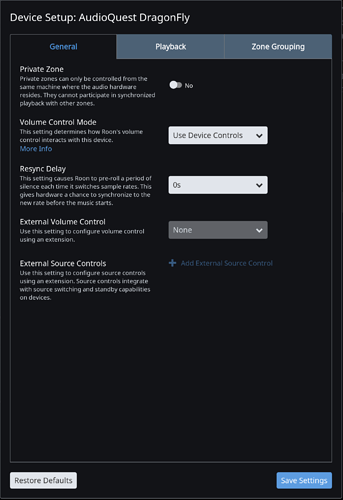 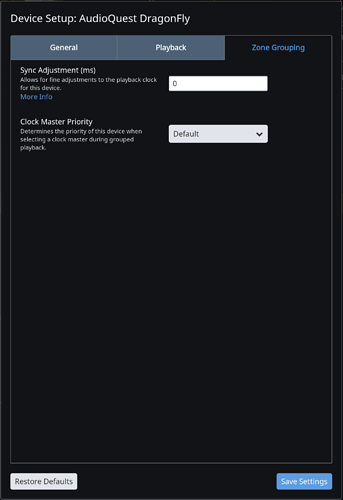 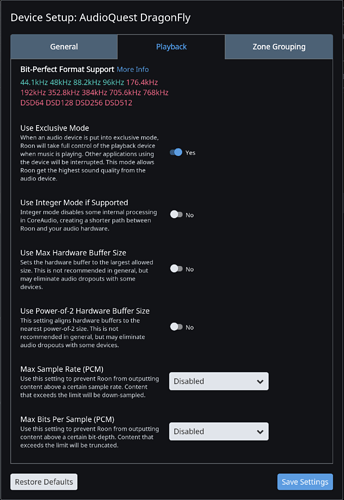 Media files
The specific album is the soundtrack from the movie “Once”. Files were ripped from CD using dbPoweramp with AccurateRip verification. Bit depth 16, 44.1kHz sample rate, AIFF. The album isn’t really a “gapless” album (by which I mean that no track leads directly into another track without a break in the audio, so I just expect silence between the tracks). So far this is the only album I’ve found in my collection with this problem; other albums (both with true gapless music transitions or discrete tracks) seem to play back without this issue.

If it would be helpful for testing I can upload the troublesome tracks to a shared folder somewhere. Happy to try any other suggestions too though! @support

Thanks for the report @Sam_Bosley and my apologies for the slow response.

If you could please provide me with a copy of the album via a 'shared dropbox link I will be glad to give it a listen to see what I can come up with as I have access to an OSX based core + DragonFly Red.

Thanks Eric! My upload speed is terrible, but I uploaded the first three tracks over the weekend. Shared Dropbox link is here: [media downloaded by support]

My dragonfly is definitely older than yours, but I’ll be curious to know if that makes the difference

No problem @Sam_Bosley, always glad to help! Confirming that the media has been received and has been scheduled for testing.

I will let you know what I come up with

Hi @Sam_Bosley ----- Thank you for your patience here, it has been very appreciated!

Moving forward, I replicated your settings/setup and can confirm that I am also noticing the mentioned clicks/pop between tracks when playing back the provided media. Sam, have you tried re-ripping these tracks since noticing this behavior?

Hey @eric, thanks for getting back to me! I haven’t gotten a chance to try re-ripping yet as I no longer have my own CD drive. I can borrow one this weekend and give it a try though. I’ll let you know how it goes!

Hey @eric, unfortunately I’ve discovered that the original disc I ripped this from is somewhere deep in storage, so I can’t get easy access to it. However, I did run an experiment that yielded some interesting results; hopefully it’ll be useful information.

I removed the AIFF version of the album from my library and converted it to FLAC using the flac command line tool. When I imported the FLAC version of the album into Roon, the clicks and pops disappeared. I then used the flac -d CLI to convert the FLAC files back to uncompressed WAV and imported those into Roon, and the clicks and pops were gone when using WAV as well.

Then, however, I did some sanity checks on the audio data contained in the three versions of the files using the command ffmpeg -i <input file> -f md5 - 2>/dev/null. This command (in theory) computes a hash of the raw audio data contained in the file, ignoring metadata. The hash of the FLAC and WAV audio data matched, but the hash of the original AIFF audio data was different. That to me indicates that the flac command modified the original source audio data irreversibly when it did the conversion (or at least ffmpeg thought it did) — which I didn’t think was supposed to be possible with a lossless format. Certainly seems like there could be something fishy about the original source files, but I don’t know how or why FLAC conversion would modify the audio data, and I don’t know why whatever it is would cause the original AIFF files to play back differently in Roon vs. other players.

I’ll try to track down a copy of the disc for more testing and let you know if I uncover anything else. Thanks again!

Hi @eric,
I did one more experiment that yielded some more useful info. I remembered that when ripping discs way back when, I had ripped two versions – an AIFF version and a FLAC version. So I dug into the backups and found the FLAC version that I had originally ripped with dbPoweramp however many years ago. I was able to confirm using ffmpeg that:

I tried playing both those original AIFF and FLAC files in Roon. The clicks and pops happen with the AIFF but not with the FLAC, even though the audio data in them is ostensibly identical. So it does seem that for some reason, the container the audio data is in is having an effect on how Roon plays it back, which seems odd. I figured these original FLAC files might be of use to you in debugging, so I uploaded them here: [downloaded and removed by Roon support]

Let me know if there’s anything else I can give you that would be helpful!

Confirming that I have downloaded the provided FLAC files for review. I will let you know what we come up with

Your patience during this process is very appreciated.

Hi @Sam_Bosley ---- Thank you again for your patience here.

As expected, I too have had no issues with the provided the FLAC files during playback. I also performed some stress tests with a handful of AIFF files I have in my local library here and have no issues to report. Just to be sure you and I are on the same page this was the only album you found had this issue, correct?

“For the most part playback seems pretty flawless, but I have found a particular album that consistently exhibits clicks and pops between tracks on all outputs.”

Hi @eric, thanks for all the hard work you’re doing! You are correct — I have probably only listened to 5% of my library via Roon, so the sample size is not large, but thus far this is the only album I know of that is exhibiting this problem.