The sort options in Roon are extremely limited, I can sort on artist, or album name, etc., but I can’t first sort by artist, and then sort by album name under that artist, so that albums by a particular artist can be displayed in alphabetical order. Instead, they’re displayed seemingly randomly. Very frustrating.

Try using the Artist Browser instead. Viewing all albums for a particular artist from there will allow you to sort the list in a variety of ways, including alphabetically, and by release date.

Thanks Geoff - I checked that out but it doesn’t accomplish what I’d like to do, and actually seems to add other complications. In other software I use, e.g. Collectorz.com to catalog my music and movie collections, and the Maestro operating system on my Olive 4HD server, I can display my music sorted first by artist and then by album title. I’m not interested in release dates, etc. That might not be the way everyone prefers, but it’s what I’ve been accustomed to for years in my large collection of mostly jazz and blues.

I have many collections stored using “various artists” in the artist entry, and they end up being displayed in no particular order (release date perhaps, but alphabetically by album name would be far more useful to me). For example, I have 10 Rhino recordings of Billboard’s Top Rock’n’Roll Hits from 1964 through 1973. Displaying my collection in the " by Artist" view, these get scattered all over the screen instead of showing as a contiguous group of 10. The same happens with artists shown as “original soundtrack” recordings which I would like to sort through alphabetically by movie title. It would seem any easy sub sort routine to build into Roon, one I’d like to see. I certainly don’t want to have to go through thousands of albums and edit metadata in order to force the kind of sort result I prefer. I’ve already spent thousands of hours working on the collection.

For the “Various Artists” and “Soundtrack” collections, I would use the Focus feature in the Album Browser. Focus/Performer = Various Artists; Focus/Genre= Soundtrack.

The results can then be sorted alphabetically, like so:
Various Artists: 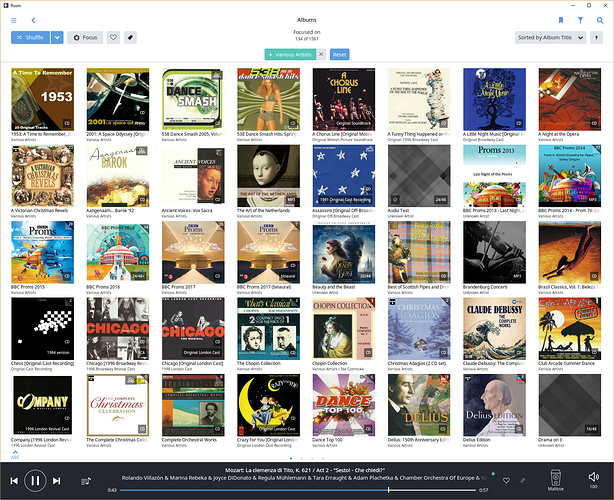 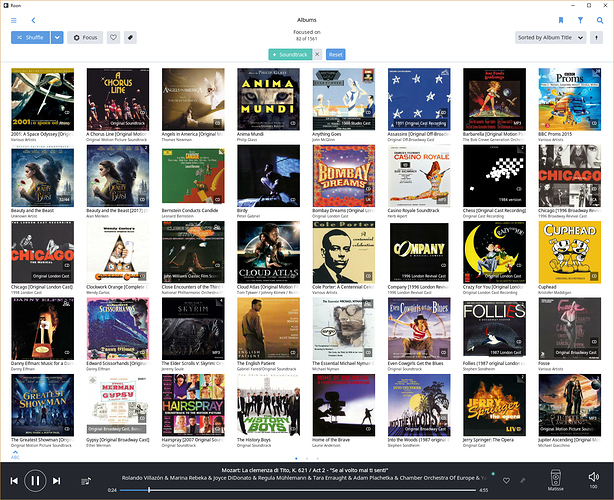 Thanks, that works OK, and probably gets me 90% of the way I’m trying to get (e.g it displayed all the Billboard hits together and others in alphabetical order), but a few extraneous albums by “original soundtrack” and named artists find their way into random places in the sort result as well.

I’d rather be able to just have the entire collection displayed alphabetically by artist and then by album title the way I like it so I can just scroll across the collection rather than go through additional sort steps to get part way there. Guess I’ll just have to adapt, or go back to the laborious task of curating my collection, again.

I often find it useful to manually edit album titles to be more consistent. This sorts more logically by Album Name

For example Beethoven Symphonies can be

Along with any other prefixes of Ludwig van etc

I make them all Beethoven: Symphonies

A bit of effort but gets me one step further

Great tip Geoff. Guess I need to get more familiar with Roon’s capabilities like Focus and Bookmarks. I’m so used to sifting through my entire collection to select something to play that I’ve basically ignored the sort capabilities. More learning ahead for me.

Thanks Mike. I’ve done some of that type of editing, but it can be a bit cumbersome in Roon, which requires a few clicks to get to the field you want to edit and apparently doesn’t allow pasting entries into the field that are cut or copied from other places or programs. At least it’s frustrated my attempts to do so and wish it wasn’t so labor intensive an undertaking. Heck, I’ll have to renew my subscription just to complete needed edits; it strikes me that perhaps that’s the intention.

Thanks again for your help Geoff and Mike.

A lot depends on what you listen

If I go LED Zeppelin, I like to see albums in ReleaseDate order

For Beethoven , then Album Name order so I can quickly get to say Symphonies

The option to sort Various Artists compilations alphabetically would be much appreciated! Rather than using Focus I prefer to simply scroll through my collection and when I arrive at the Various Artists area the listing is a complete mess, as others have mentioned.

Correct me if I’m wrong, but I think if you sort by artist the default sort is then by release date. So Various Artists will be recognized as a single artist and all various albums will be sorted by release date. I can see how you might want Various Artists sorted alphabetically, but most people want albums sorted by Artist/Release Date. So it’s not possible to do that for some artists and then sort alphabetically just for various. However, as discussed above, you can do that using focus on Various Artists then sort by title.

The option to sort Various Artists compilations alphabetically would be much appreciated!

There’s an option at the bottom of the General tab of Settings that will sort compilations by their title.

This means that “Now That’s What I Call Music” sorts to N, and the Pulp Fiction soundtrack sorts to P, for example.

Thank you Mike for the input. I now realize it’s not reasonable to expect Roon to sort the Various Artists albums differently than the main artist listings. I do prefer to have the single artist albums sorted sequentially by their release date, oldest to most recent so that necessitates the Various Artist listing be sorted by release date as well.

I checked out your suggestion to sort compilations by their title but that distributed the Various Artists listing throughout the album view, they were no longer grouped together in a Various Artist section.

I plan to learn more about the “Focus” feature in Roon.