Before I go off on my rant, let me say that for the most part I enjoy Roon and am for the most part happy with my decision to become a lifetime subscriber. However, the “integration” with TIDAL is taking years off my life. I’ve simply lost count at the number of times I have had to go in and delete albums over and over and over again, only to have them simply reappear. But my newest pet peeve is tracks from ‘greatest hits’ randomly show up in place of album tracks for no rhyme or reason. This morning alone I’ve had to go in and fix that for three different tracks.

Because this keeps happening, I’ve decided to slowly reduce my reliance on TIDAL and go back to using versions of albums that I have stored on external hard drives. Sounds great in theory, but with close to 2,000 albums in my music library it is going to take some time. So I was especially pleased to discover this morning that - yet again - TIDAL versions of albums that I had replaced with local versions were showing up in my library, yet again. And - yet again - compilation and greatest hit versions of tracks were showing up in place of album versions of tracks.

I’m sure there is no easy solution or answer for this, but I needed to get this off my chest as when I complain to my wife about it, I get the old “your music library again?” roll of the eyes.

I mean, look at this insanity: 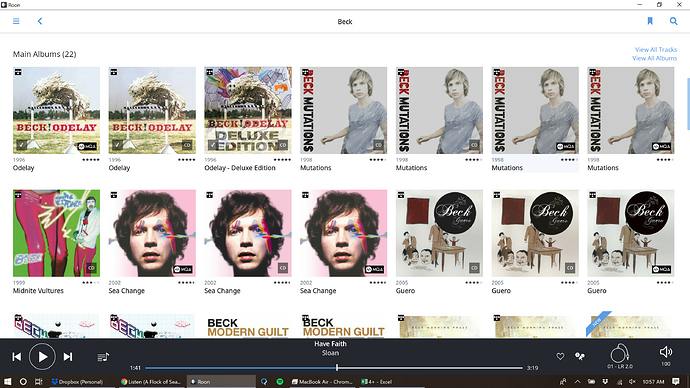 I’ve never noticed Tidal albums reappearing after I’ve deleted them. I would be pissed as well. Have you considered unsubscribing from Tidal?

FWIW, I haven’t seen this either. Have you tried disconnecting from Tidal in Settings (under Services) and reconnecting?

This is not normal behaviour. Flagging @support

I have never had anything added by Tidal that I didn’t ask for nor has any Tidal title reappeared after having deleted it. Not sure why you are having the issue.

Here’s an example of a bunch of random tracks that have been added to my library from compilations, in lieu of the actual album tracks that I did add. On the one hand it is good to hear that this is not a common behaviour that others have experienced, leading me to believe it can be fixed. On the other hand, I’m going to pull out my hair trying to deal with this myself manually before it does get fixed. 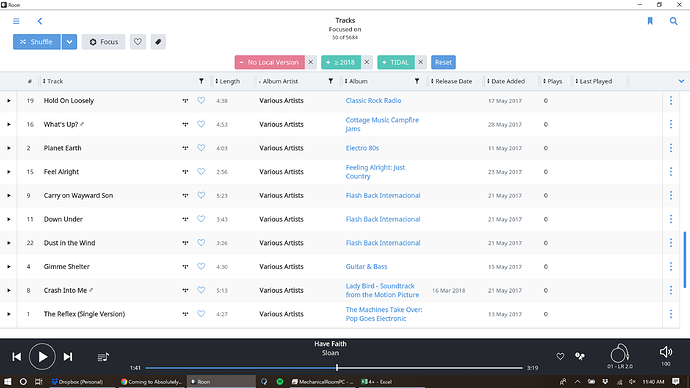 Hopefully the issue you are having will be identified and corrected soon. My experience with Tidal has been very positive and different from yours. I’ve not noticed anything added on its own nor have I noticed something getting deleted. I have run into tracks on a Tidal album that are not available to play which is frustrating but they get skipped and the music keeps playing so it’s not a huge problem.

I only have 425 albums in my library and 344 of them are Tidal albums that have been added in the last 4 months. My usage of Roon seems to differ as well since I mainly search Tidal from within Roon for albums, add them to my library and then select an album to play with the Radio function taking over after the album finishes.

Thanks for contacting support, I’d be happy to take a look over this issue with you. I can confirm that this behavior certainly isn’t normal and we need to figure out what’s happening differently in your library, can you please confirm exactly how you have been adding these tracks/albums to your library?

Please let me know your reply to the above questions when possible.

Historically my preference was to add individual tracks rather than full albums. Over the last few months however, I have switched from that method to adding full albums and then hiding the tracks I don’t like.

With respect to your questions:

I had the same issue with tidal and roon, when I was trying to stop around 1500 tidal albums from appearing in Roon; I’d “delete” them in Roon, and yet many albums would be reappearing incrementally over time, it was really strange and frustrating.

If i remember rightly , it’s because I had tracks favourited and artists also in tidal, not just albums. You have to unfavourite everything for it to not reappear in Roon.

Personally I found the Tidal integration intrusive, more polluting than adding something positive to my collection, in the end I have gone for a Qobuz account. Not sure how I’ll feel when/if Roon integrates with Qobuz

Thanks @Sallah_48, I was afraid it might be something like that. Man, what a pain that is going to be.

It was a while ago it occured, so Im not 100% sure. Best thing, imho, for procedure, would be to run some tests if you can, on a few recurring albums to begin with only to avoid having to do unnecessary work on a whole bunch of stuff.

See if the albums disappear for good if you remove the favourite corresponding tracks first in tidal, then delete the albums off roon again, if they do behave, then the artists won’t need to be unfavourited, and you know it’s only the tracks which are offending.

I logged into the desktop version of Tidal and unliked every single Tidal pick. 24 hours later they were gone from Roon without me needing to do anything else. Since then I have picked a playlist and a single LP on Tidal. I search for what I want and don’t see 200 options ‘selected for me’. Only my own library of rips. Just get it done. It takes 30 minutes of repetition then you are done. For the record I like having Tidal, it was purely about preferring to see stuff I own or have picked myself.

Yeah, with some advice provided here in this thread, I’ve gone into Tidal and for whatever reasons, individual tracks that I would have marked as ‘favorite’ on one particular album have now been split to other versions of the album (Deluxe! Remastered! Remastered and Expanded!), or worse, to singles. I’m not sure why this suddenly happened out of the blue, but it looks like it happened within the last two weeks and it appears to impact about 40% of my library - or about 2000 albums.

What a frickin PITA fixing this is going to be. Just another reason to decrease my reliance on Tidal I guess.

Wow, one of the things I have absolutely loved about Roon is its Tidal integration.
One always has to keep in mind how Roon displays favorited songs and favorited albums.
As you noted, whenever something looks goofy in Roon, go into Tidal to see what they have mixed up.

I have similar issues with Tidal and Roon. If I have favorited an album or song using the Tidal app on my phone, it appears in my library in Roon. It would be nice to tell Roon, if there’s a 16/44 version of the same album in my local filesystem and in my Tidal Library/favorites/playlists(whatever), the always favor the local one’s and don’t display the Tidal songs (when there are duplicates).

It might also be nice to have Roon be smart enough to recognize that MQA albums are probably worth a checkbox to keep in our Roon Library and not disable with the above lot.

Seems simple, but I’m guessing that it’s not because you’re having somewhat similar issues.

All available versions of an Album, both locall and Tidal, can be seen under the Versions tab. Roon automatically selects the highest resolution version as primary, preferring local to streaming where resolution is equal. MQA is treated as higher than a local version of same resolution. Users can manually select a different version as primary if we prefer.

FWIW, I have been dealing with this issue for 3 years: Roon/TIDAL integration woes when it comes to tracks and albums randomly switching from what I’ve chosen in TIDAL to what I end up with in Roon.

Like you, I Favorited tracks instead of albums in TIDAL. As a result, I also had to deal with the tracks I selected changing from the album version I chose to some random “Greatest Hits” or some other version of the album. I ended up with multiple album versions and hits albums that I never chose ending up in Roon.

I worked with Roon tech support via PM, and it seems that the Roon/TIDAL integration works best when you select an entire album in TIDAL and not just your favorite tracks from that album.

Since I’ve started favoriting albums instead of just tracks in TIDAL, the integration with Roon seems to work better.

The bad part is that now I have to go through my entire Roon library, album by album, and add the whole TIDAL album to get just the track I really want. Then I have to delete all my TIDAL favorite tracks and just rely on Roon’s UI to favorite/ban TIDAL tracks.

It’s a double-edged sword: I have to invest many more hours in curating my TIDAL favorites in Roon, but I also have found more good music through the process than I would have otherwise found.

Best of luck from your brother in Roon/TIDAL pain,
Jeff

Since I’ve started favoriting albums instead of just tracks in TIDAL, the integration with Roon seems to work better.

In just Roon without Tidal, Roon prefers albums over singles. I have several folders of singles of different genres, bit rates etc. and Roon will not recognize the individual album art for each song from different albums even if you have them properly tagged. It seems that Roon is album oriented and it considers each folder as a album and it also seems that when someone in Tidal tags a single, then Roon will search this individual track out in Tidal and list them all as albums even though this was not the objective at all.