Rock on Intel NUC (nothing changed)

Rock, NAS and one BlueSound Node 2i connected via LAN, another Node 2i via WLAN (nothing changed)

BlueSound Node 2i (nothing changed)

After 1.8 update nothing really works anymore…It started that the Core did not restart after update. “Not found”… No contact… I had to restart the NUC by pulling the power supply.
Next effect: “Cannot login to TIDAL”. Every application else in the network could, so it was not due to TIDAL or my network or whatever. Took some time with different attempts to relog-in, till it finally worked.
Next effect: Could not play any song from my library. They were shown under “titles”, but could not be accessed. No success in trying to tell Roon now, where my library is located. I deleted the library directory entry, and re-entered it, but it keeps empty.

No further ideas what to do…

Just to confirm my own environment: if I run music via the BlueOS app for the Bluesound Nodes, it works fine either with TIDAL or with my own library. Not any problem.

Somehow I made it that Roon started indexing my library again! Yeah! It went quite fast showing now:
Connected
Realtime monitoring of new files
5447 titles imported

Wow, that looked good. So I went selecting “Titles” from “My Library” and there were all my missing titles displayed. So I started the “My Titles” “Random playback”, the first title was shown, 4:27 playtime, the cover of the LP, but… well, nothing happens, the normaly blue or green dot on the left is gray, where I can see the source (either library or TIDAL) and the steps of processing, it’s completely empty. it just shows BlueSound Node 2i and Audeze LCD-2 as final steps (of nothing…).

Not a real progress…

I’m very sorry to hear that these issues have sprung up and are causing such a headache. We appreciate you posting in Community to let us know.

I have just a few questions to diagnose what might be going wrong.

Once we know the details of your network setup, we’ll proceed with additional troubleshooting steps until we resolve the problem. Thank you for your patience - I know how frustrating it is to go without a working setup.

thanks for your reply.

When I try to reset the Roon Database and Settings, I will get an error. 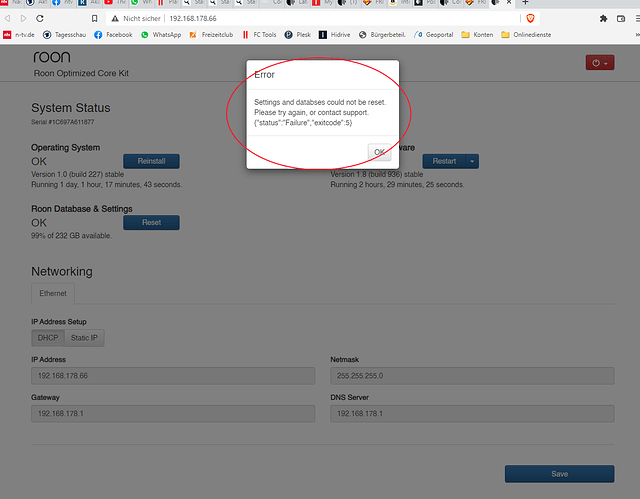 I appreciate the thoroughness and detail of your response. While the issue likely isn’t a local network problem, knowing the full details of network hardware helps to eliminate variables so my team can trace the problem more efficiently.

The error message from your last screenshot suggests you may have the Data folder from your RoonOS device mounted to your desktop computer while you’re attempting to reset the database. If so, please unmount it and then reboot your Mac/PC before attempting the reset again.

Also, please take note that resetting your database will wipe out all settings and your entire existing Roon database. It’s a heavy-handed step but should resolve the issue. Before proceeding, be sure that you have a recent backup (unless you’re willing to rebuild your library and all saved settings).

Thanks again, connor, for your fast response.

Well, “stranger things” happen over here (with a tendency to get better

No, I did not mount anything from the NUC to my PC. (Never thought of, and now I’m surprised that the NUC isn’t shown in the Windows Explorer network view, but anyhow, I tried to access it via its IP, and that worked).

What I found was that my backup programm, which makes a weekly backup of my music library to another drive, had a problem to access one of the ~5400 files. Well, I deleted the whole directory and, taking a look at my Roon app, found Roon to reindex my library.

And nothing happens any more… What’s the progress: If I start to listen to my music via “My Library - Titles - Random replay” Roon generated a queue with 1370 titles (maybe there are some library titles directly from Tidal, not my drive) and plays also my files from NAS.

So the question is now: why did Roon stop indexing before the end and how can I force a new indexing? Hm, I copied some new FLACs onto my NAS, but Roon doesn’t care about this. Normally Roon shows “realtime monitoring” of the library dicrectory, but not now.

Well, the current problem seems to be that the reindexing of the complete NAS directory is failing and stopping - no idea why. Maybe due to problems on the NAS side (that’s been running for years without any problems…).

What could I do?

Wow, coming back from the fitness studio, I thought I’d take a look. And what did I see?

So up to now no problems any more. It’s magic.

I come back to you, when there are some more “stranger things”. Thanks for now.

Fantastic news. Thank you for circling back to let us know.

Reviewing our thread, it does sound like the root of the issue was the Core losing the network mount with all your files, which the database reset should have resolved (despite the reindexing holdup).

While I’m thrilled to hear your setup is working now, please reach back out in a new thread if you encounter issues or any issues with your database or network again. We’ll be here to support.

Roon currently is busy to analyze all songs of the library, 835/4411 right now, so it will take some more hours to complete. So it does what it should. BTW, I did not reset the database in the end.
Thanks again for your lightning fast support.
Diethard