Confused artists - (The) Lost and Found

I own an album called “Forever Lasting Plastic Words” by a band called “Lost and Found” (60s psychedlic band from Texas).

In the allmusic.com database the band is listed as “The Lost and Found”. (https://www.allmusic.com/artist/lost-found-mn0001514083). The discography is mostly wrong. All albums (except the first one in the list) are recorded by other bands (of the more or less same name). 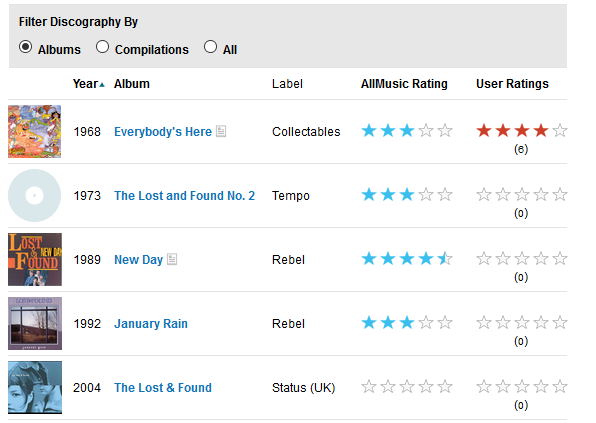 In addition it seems that the album has two names (depending on the catalog or listing it is mentioned - see comment at discogs.com below). 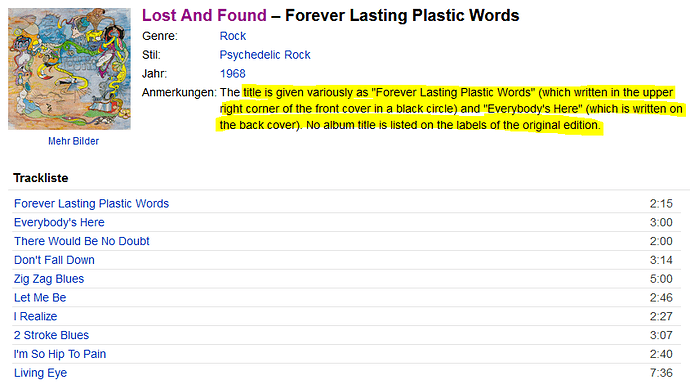 I purchased the album from Qobuz. Their catalog says

It would be great if there is a chance of fixing the entries in the database.

This appears to be an issue on our metadata provider’s side. I’ve reached out to them asking that they review this artist and make any necessary changes here. I’ll be sure to keep you updated once I’ve heard back from them. We appreciate the report.

I’ve received word from our metadata provider that they’ve reviewed the Lost and Found artist and cleaned things up. Things will take about a week before it reflects in your library. If things look good after that time, please mark this post as the solution to the topic. If there are any other issues you notice at that time just let me know and I’ll take a look.

The album is now available named “Everybody’s here” (that’s one of the two names this album is known as). I renamed the album and it’s all good now.