Confusion between Album and Track

I am confused as to how Roon Handles albums and tracks for Dire Strait’s Sultans of Swing album. When I enter “Sultans of swing” in the search function and click on the only album found, I get an album which seems to have only a single track (So far away). When I then go to one of the tracks listed under tracks, i get the complete album. This cannot be the intended behavior ?

What service and what album version are you using? 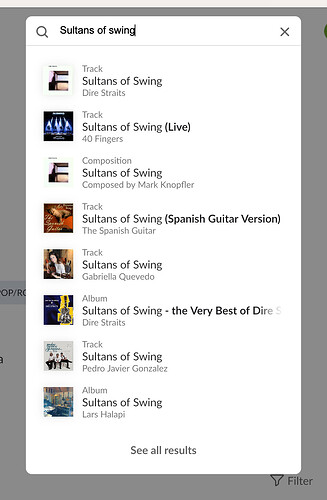 If I choose the first hit I get this: 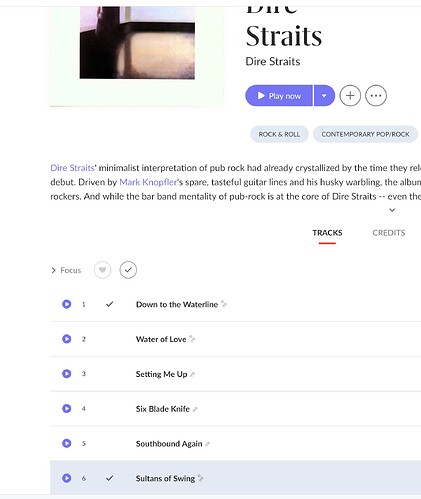 It’s the same in Qobuz and Tidal for me.

Hi, thanks so much for replying.

I am only using local files (my ripped CD collection). So maybe my issue is my file tagging. I checked, all the tracks on the album have the same text as album name.

So my issue is that all searches work as expected except the one for the album.

OK. I’m afraid I have no experience with local files and how they are handled. Sorry.

I doubt this has anything to do with search as such. Did you try going to the Roon side bar > Library > My Albums, make sure you sort by artist, then scroll down to the Dire Straits albums?

What do you see there, does the album cover appear several times but they all have incomplete tracks?

What do you see if you click on versions on any of the albums?