The spinning circle is back. It’s going constantly despite the message saying scan is complete.

This was happening regularly and I cured it by upgrading from a 5.4 series kernel to 5.8. All has been fine for a few weeks but now it’s back.

I rebooted to no effect. Any suggestions? Will a fix be coming with Roon 1.8?

The picture is not too clear but you can see the circle spinning away. Looking at the logs on the NAS there doesn’t seem to be much disk activity caused by this. 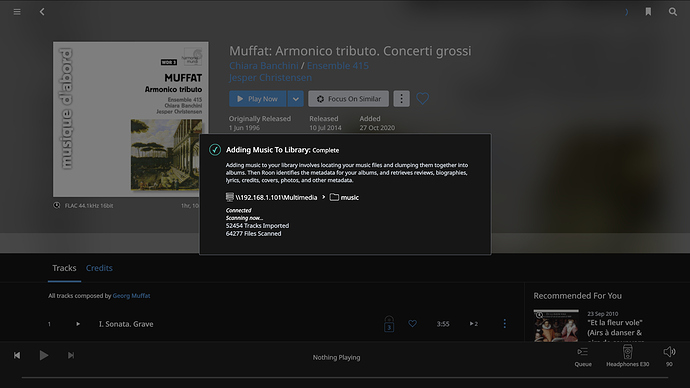 Have you added any new media recently? We haven’t seen any other reports of that same issue happening on newer kernel versions, so it may be an unrelated issue with scanning media.

Can you please do the following:

This time I shutdown the core and left it for 15 minutes (due to getting in a temper with it). When I rebooted the circle was gone.

Previously I was just rebooting immediately. The circle returned if I did this.

I did add one new CD yesterday, ripped and then stored on the NAS. This is the second or third incident of the spinning circle with the 5.8 kernel versions over the last few weeks but I can’t be certain if it was when I added new albums. I’ll keep an eye on it.