Thanks Paul
I hadn’t been to Igor’s site in a while. I had read about is DSD to PCM conversion software and actually installed a trial version once, but was not aware that he also does an ISO extractor. I assume at the core of the extractor sacd_extract.exe is lurking somewhere.
I will certainly take a look at his ISO extractor. Would be a pity to redevelop something that already exists.
Rudi

@Paul
I took a quick look at the website and I have a sneaky feeling he is using sacd_extract.exe to do the extraction. Could you please check if you are able to extract both the stereo and the multichannel files into one target directory, with correct track numbers like they were on the SACD / in the ISO? If the extractor software does that, we’re pretty much home. If you only have the choice to either do stereo or multichannel, but not both, we’re stuck where we started.
Thanks a lot for looking into this.
Rudi

Yes, the extraction process does use sacd_extract.exe. But there are additions to it as well, to improve it. I played around with it to try to simulate what you want to do. It almost does it, but not 100%.

Convert all the files within an ISO and dump the DSFs into a artist / album directory structure based on the metadata within the iso.

Yes, it does this. Batching of multiple ISO files is supported. In your nominated target directory, it will create folders in the form “performer / year - album name” based on metadata contained inside the ISO and store the converted files in there. Currently, there are no options to change the folder format/naming, other than the one mentioned above.

Yes. It can do this. Batching of multiple ISO files is supported. Unfortunately, it is not too smart about it, and the outcome could be improved. Currently, it does the following (assuming you want everything to go to a nominated “target location”):

If original file is located in:
/Original_Location/Artist_Name/Album_Name/SACD.iso

Then it will create the following in the target directory:
/Target_Location/Original_Location/Artist_Name/Album_Name/SACD_DSF files.dsf

That’s about as far as I have gone with it. I really suggest that you contact Yuri (the developer) directly. I have found him extremely helpful and responsive, and very willing to adjust the way his software works. It seems to me that it will do 99% of what you want, and that some minor modifications to the application would give you exactly what you want.

Thanks, Paul
that sort of confirms my hunch. sacd_extract.exe has a couple of quirks, one of them being that the stereo and mch tracks carry the same name. I assume Mr. Wicked, the author of sacd_extract.exe never intended for it to be used to extract all tracks within and ISO. He must have been primarily focused on stereo.
The difficulty for anyone programming a shell to extract all the files is that the multichannel files will carry the same tracknumbers and hence the same name as the stereo files. So they need to be stored in a temporary directory, be renamed / retagged and then copied to the target directory with the new names, so the stereo files do not get overwritten.
If things were to be done this way, and if there are NO mch files in the ISO, sacd_extract will extract the stereo files instead when instructed to extract the mch ones. So they will go to the temp directory, be renamed and then be copied to the target directory, resulting in duplicates.
So this shell is not really a trivial thing. If sacd_extract.exe’s quirks could be “fixed”, life would be a breeze. But I never got a response from Mr. Wicked.
I’ll think on whether I am up to the challenge of expalining this to Yuri.

I’ll think on whether I am up to the challenge of expalining this to Yuri.

I think just explain your requirements to Yuri and let him have a go at it. You might be surprised. A lot of the development of his application has come from individual user requests. He is normally very responsive as well.

If so then Roon is most likely to not find a good ID match as an album will contain 2x the number of tracks expected.

Roon will very likely find a good ID match and will AUTO-POPULATE the album version comment so that you see [version text] in album detail and browser screens.

Worth considering this before getting any extra coding done.

Hi Nick
actually I was thinking of getting the extractor to create the following:

exactly like track numbers are on the SACD. I thought this way would be the most bulletproof for roon to identify the album.

I guess what target file structure roon would most easily identify as the correct SACD would depend on the way ROVI delivers the metadata of SACDs. With the introduction of multichannel I can imagine roon’s requirements will be slightly different than in the times of stereo only.

Don’t worry, I won’t go any further until we have vetted out (together with roon) what is the best way forward. That’s one of the things this forum is for.

OK. I think Rovi/Roon’s database sources have a bit of a mixed bag of how they present SACD releases.

However, the majority of SACD that I have been matching only seem to show one set of tracks for the album. Presumably these are the stereo track lists. So, your listing example above may not work so well.

Here is an example from a SACD that definitely would have setero and MC tracks but only lists the stereo tracks for matching. 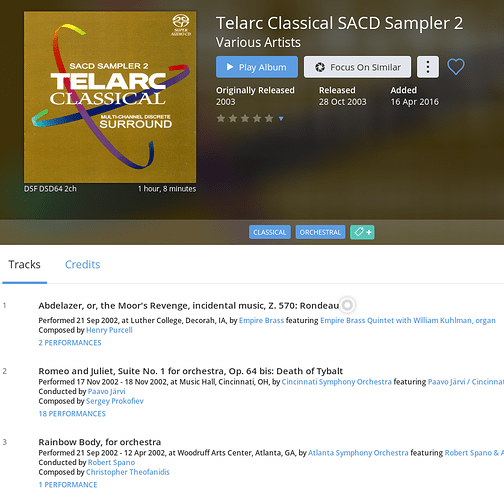 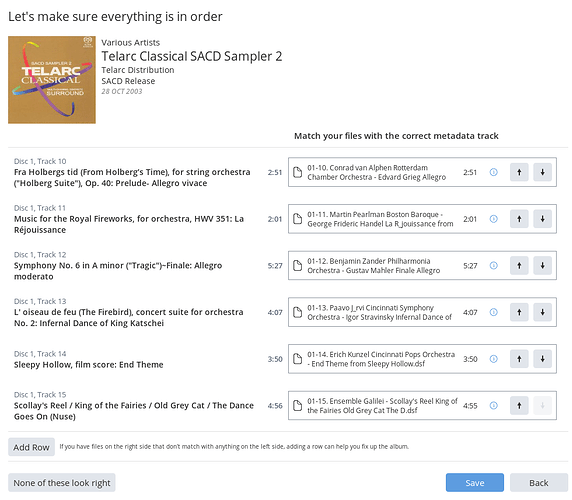 A few, definitely the minority, will show stereo and then 5.1 mixes like you have above. These IIRC come from DVDA and DC/DVD deluxe type sets rather than SACD.

example here. I don’t have the MC files in the same folder. 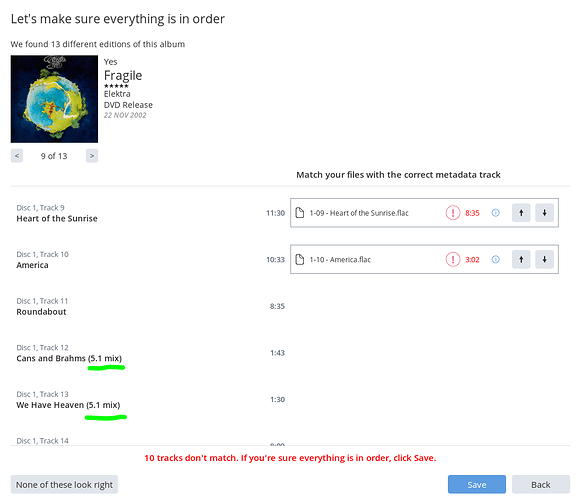 Sometimes these show up as Disc 1 and Disc 2. Maybe they come from from a single .iso or a double disc set. Hard to tell sometime if it wasn’t my rip or I cannot remember the rip exactly.

@Nick, with the last example I would assume it would match perfectly if the MCH tracks

It all depends on the data that is stored in the databases. As mentioned above, most of the SACD releases that I have matched only seem to use a single track listing rather than the stereo and MC tracks.

(@ncpl is the user tag you need for me)

I used this bash script to extract 500 ISOs in a day. The script will walk a directory tree and convert all the scarletbook ISOs it find. If you change -2 to -m it will do multi-channel instead of stereo and if you change -s to -p it will write the output files as DFF instead of DSF.

put sacd_extract somewhere in your path.

After testing multiple ways to convert SACD ISOs I found this software:
http://xrecode.com/xrecode3/

In the last version all the functionality I was looking for is now available also for windows users (and not only for mac os users with TRAX).

The essential information about this tool is well hidden here:
http://xrecode.com/xrecode3/forum/phpBB3/viewtopic.php?f=15&t=29

I bought this software for this reason but wasn’t able to find out how to convert to DSD: I can only convert ISO SACDs to flac 24-88.2 (or any other format). However, I’ve been using it to convert all my .ape to flac AND to get rid of all my .cue-based collection (both are not compatible with Roon). I love this software. If someone knows how to use it for ISO to DSD conversion, please let me/us know.

That is in deed a little bit tricky and I had the same problem in the beginning.

If you select an SACD ISO image as the input, xrecode lists all the titles and meta data.
Then you have to select “extract” from the Action setion. After that you will find a “Extract button” right of the radio button.
After clicking the “Extract button” you can select whether to get DSF or DFF format files.
Then you simply klich “start” and get the result as usual.

This way you can extract the SACD ISO lossless without any conversion.

Excellent. All I wanted. Although the software is easy to use, there are lots of great options that are hidden or not intuitive (including SACD ISO to dsf conversion). The lack of a manual is a pity. Thanks so much for the instructions on how to extract dsf from an ISO file.

I have converted my SACD ISO to DFF, and the stereo tracks shows up fine in Roon, but the multichannel tracks does not. I use TraX. The multichannel looks like this: 01. Norah Jones - Don’t Know Why [5.1].dff
Am I doing someting wrong?

You might also try the software ISO2DSD ( a free application)

TraX should work fine. (It’s actually more user friendly and has a lot more features than ISO2DSD.) You might want to select DSF rather than DFF as your file format.

Roon does not import the multichannel files. I have placed the files in a separate folder, not in the folder with the stereo files, is that wrong?