I have been doing complicated things to optimize disk storage on my computer (not Roon Core).
SSD for the OS and work space and Adobe Lightroom database.
Several hard drives set up under different types of Storage Spaces with different trade offs between storage efficiency and speed and processing overhead and reliability.
A RAIDed NAS.
External backup drives.
Cloud backup.

Spent a lot of time and mental energy optimizing all this.
Not convinced it’s worth it.
So I just bought a 10 TB drive for my PC. (I will still do backup, of course.)

Interesting. I went back and looked at my Amazon orders since 2009. These drives are not the same speeds, so a little bit of apples and oranges, but still close.

I remember around 2003, when I had just joined Microsoft, we were in a technology strategy discussion with a lot of senior executives, and somebody said, do you realize there are people in this room who can afford to buy a terabyte, and there was this awed hush in the room.

Sometimes we need to recalibrate our thinking.

In 1986 I had people gathered around my PC with its multiple external enclosures where I had gathered multiple controllers to make 1GB of SCSI disk!

I used to make presentations where I showed some number — CPU, RAM, HD — evolving exponentially over the past 10-15 years, and we would all laugh at how silly we were: 640k of memory, and then we got 6 meg, and then 60 meg, and the 600 meg! Ha ha ha! But then I would continue that graph out in the future, and say soon we will have 6 gig, or 60 gig or 600 gig depending on where we were in the history, and people would say, no that’s crazy, you can’t extrapolate like that.

Somebody offered a cloud service with 10 GB of storage, and 10 GB is the amount left on your phone when you consider it “full”.

But we shouldn’t just laugh at this, or marvel at it, we should adapt our technology instincts to it. Not optimize the wrong thing. This has been difficult during my 45 year career. And those 45 years was the infancy, the real Information Age is starting now.

I have been doing complicated things to optimize disk storage on my computer (not Roon Core).

Actually, “don’t want to” refers to music and other similar stuff.
I do more geeking around with computers, in particularly when I made a living at it (now retired). Windows Storage Spaces came out of my division where I was architect, of course I needed to evaluate it in practice. But it was designed for corporate data centers, not for consumer music systems.

I bought a 20Mb hard disk for my Amiga in 1985 and thought I was pretty cool. These days I backup the Roon database onto a thumbnail sized 128GB USB stick.

I recall in the early '90s being excited to have an ISDN line (dual bonded) with 128 kbps and thinking: what am I going to do with all that speed?

The most recent was yesterday when I got a 400 gigabyte Micro-SD card!

This thing is smaller than my thumbnail!!!

I’m staring at it and I still can’t believe it!

Yup - I bought a 20 MB hard drive for my Atari ST back in the day, and marvelled at the vast amount of storage that I had…

The micro-sd card has 20,000 times the storage of my old Amiga Hard Drive! 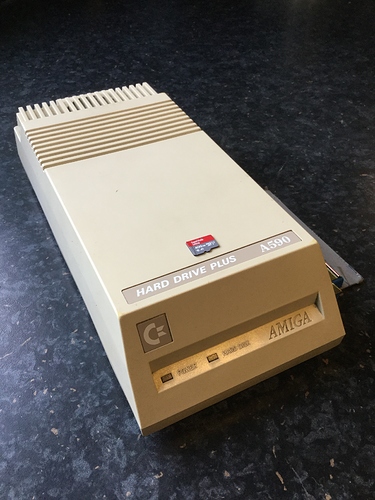 When we were starting our fledgling software company we bought an external portable 10MB hard drive to attach to our Compaq “luggable” computer. The 10 MB hard drive cost $1300.

I remember installing a 4K upgrade to an ibm 360 145 back in the late 70’s doubling the memory (it was magnetic core storage…not even ram iirc) and recall board approval was needed to have the order made. I hate to think how much it cost then.

I’ve posted this before, but it bears re-telling.

When I got my first IT job (1978), they gave me a tour of the data center. Most data was still on tape, but they had a 10MB drive for the real time data. It was the size and shape of a 55 gal. drum. It was in a glass case and one could watch the read/write head move across its surface.

The company I worked for was known for buying state-of-the-art. They were one of the first to time-share a satellite.

I remember when only SCSI was capable of the data stream necessary to burn audio CDs without error. I had 1 750GB SCSI drive and 2 1GB JAZ drives to do this, at a total cost over $2K. Now that stuff is just a museum piece, if not straight out junk.

I remember the 20MB PC drive and VAX drives the size of a birthday cake.

Now every time I add a new drive I think I have enough but I keep needing to add more. My collection just keeps growing (including bigger file sizes w/HiRez).

I calculate $/TB but spent a little more to get the 10TB this time because I’m trying to minimize my drive count.due to cabinet space.

I remember we had a used shoe box to store our ones and zeros in. And for entertainment we had a broken piece of string (mono only). But we were more happy. Try telling that to the young folks today…

A shoe box? You were lucky! We had to separate pieces of coal into different piles for zeros and ones, at the bottom of a lake.

Back in the day, I had to walk a mile in the snow, uphill both ways, to hang tapes for overnight batch posting runs. An 0c7 halt meant getting a programmer out of bed at 2am and walking over again to restart the whole shebang!

On a serious note, I once worked in a mainframe shop that had a once-a-year job that ran off punched cards, because disk storage was too expensive to justify storing the program on disk.

If a card misread you started over. Sometimes you had to manually repunch the misread card. If you dropped the deck and scattered it on the floor, woe be unto you. Worst case you were fired. Best case you would use a card sorting program that took hours to put them back in order.

Good times! You kids these days have no idea. So get off my lawn!