Bluesound Vault, Powernode and Pulse Mini (all 2i versions) with Quobuz Studio.My internet speed is 23.6 Mbps download, 4.21 Mbps upload - we pay for the fastest available.

I endure a crash at least once a day on average, never knowing if it’s Roon, Quobuz or Bluesound that is the culprit. I have experience runs of several days, often two days, mostly one day before a crash and reboot of everything. However, today has been the worst - TERRIBLE - I’m not listening now because I can’t take the reboot hell any more today. There must have been some update - my Bluesound icon in Roon has changed, the red text regarding my Bluesound not being optimized (or whatever the phrase was) has disappeared - it all looks better and performs WORSE. Right after I sign up for a year Roon subscription after my trial…! I know Qobuz did an update today. Is there something going on - c’mon Roon-Quobuz-Bluesound integration, what gives? HELP!

Can you provide some additional details about the Core machine?

Can you provide some additional information about this crash? What exactly happens? Is it that music stops playing? Are your remotes able to connect to the Core? Is Roon still running on the Core machine or has it completely stopped?

My core is a thinkpad laptop. The music stops whether my remote is connected or even powered up. If i’m shuffling my tracks, no sound, while my bluesound devices appear linked in roon, the audio graphic is active, the blue ans purple quasar icons are there but tracks appear one after the other, skipping to the next, silently. I clear my queue, reboot roon, sometimes success. Most times, remote no longer recognizes core, rebooted roon no longer recognizes bluesound devices and my only effective solution is to close roon and unplug-reboot each of my otherwise grouped bluesound devices. Then i restart roon and things usually sort themselves out. But today - ARGH! OMG! - THE MUSIC DIES AND DIES AND DIES AGAIN…! Sorry, just very frustrated, please advise. Of note: if i log directly into qobuz music plays out of my laptop (since my roon core output is to bluesound devices). So am i having bluesound-roon-bluetooth hardware glitches?

When this occurs are you able to play to other endpoints in Roon, like System Output of the Core machine, or is nothing able to play?

Can you confirm that the Bluesound devices are fully up to date?

Playing along fine, happened to be online (I know, core doing double duty) but hey, it’s my laptop. Otherwise, for music, nothing responds - changing endpoint isn’t possible; as I said, the tracks are skipping as if the “system” is searching for a playable track, occassionally indicating “track not available on qobuz” (they are) but not always. It’s just a total lock-up, glitchy nightmare. Only solution is to unplug all my Bluesound devices, clear queue, reboot roon and hope for the best. Will a roon nucleus solve this problem, it’s HORRIBLE. P.S. Bluesound devices are up to date. 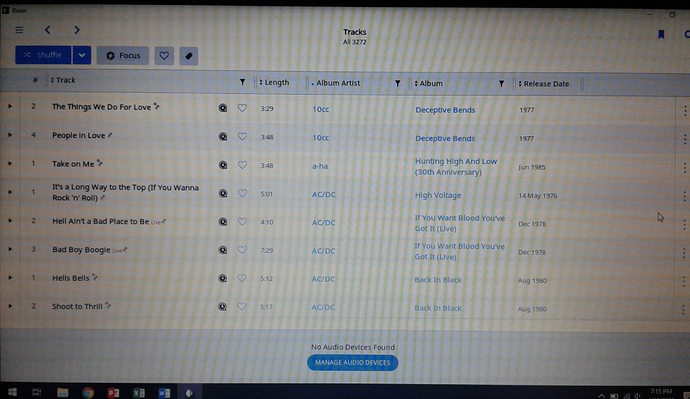 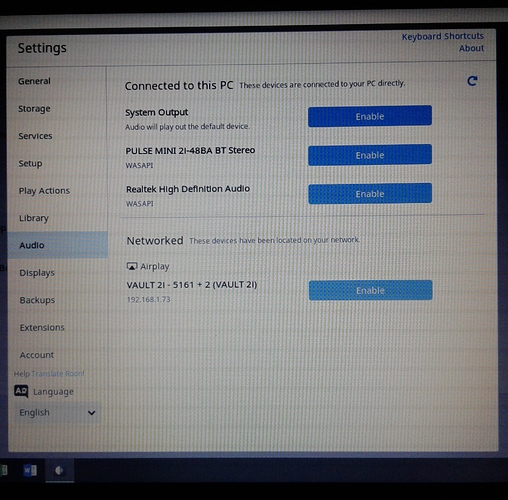 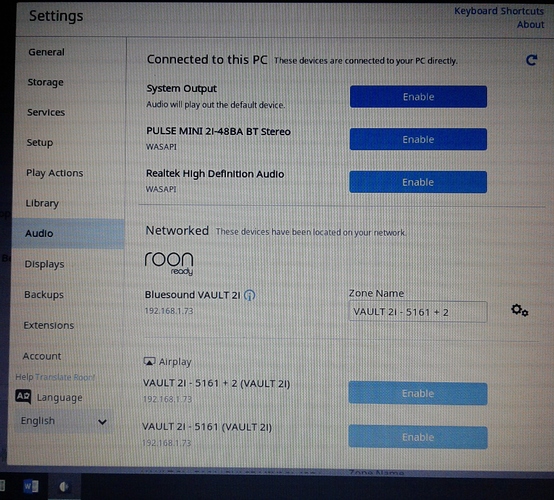 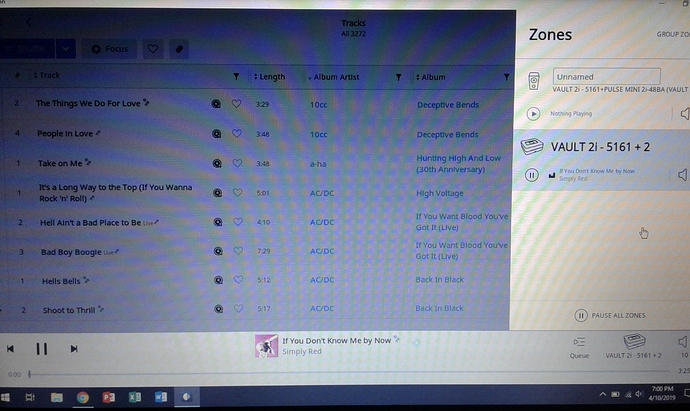 Ack - I described the images in reverse - the first two show after rebooting roon, the second two, prior.

Can you share some details on your networking hardware? How are these devices and your Core connected to the network? What are the models of the router and any switches or other networking devices on the network?

When Roon is unable to see these devices are you able to play to them from the Core machine outside of Roon?

Based on the symptoms, it seems as though there are some networking difficulties at play here that are preventing Roon from being able to detect the Bluesound devices on the network. As mentioned in our Networking Guide, we recommend that you use an Ethernet connection whenever possible.

For testing purposes, could you connect your Core machine and your Bluesound devices to the network via Ethernet and see if there is any change here?

I’d like to oblige with connecting my core via ethernet but, alas, my laptop doesn’t have that jack. however, i did ethernet my bluesound pulse mini (relegated to basement with the modem) so that my bluesound powernode powering my living room speakers will be the only thing not ethernet besides the core. With the coming Bluesound update, too, things may settle down, here’s hoping? Ultimately, there may be a Nucleus in my future to tighten up this system-upon-system-upon-system complexity. Thanks again.

A fix? For those Bluesound users out there my system responsed favorably to simply using an ethernet connection for my Bluesound Pulse Mini2i (the remote, otherwise wireless-capable speaker which, again, resides in my basement alongside my modem). My Powernode2i and Roon core (the laptop I’m using to type this post) remain wifi. Conclusion? - my wireless core doesn’t appear to be the problem. Nor a wireless Powernode. What can I say except my Roon-Qobuz-Bluesound set-up has been running flawlessly for over 24 hours straight for the first time in a month. Meanwhile, my thanks to Dylan Caudill for attentive, timely assistance which far outshone the help from Bluesound (no response at all) and Qobuz (a single response with no follow-up).

I’m glad to hear that connecting the Pulse Mini2i via Ethernet helped! If you ever experience any other issues with this please feel free to reach out to us here.
.
Happy listening