To me, the 1.8 change that has done the most violence to usability is the album credits view.

I don’t need to see thumbnails of artists (most of which are just their initials anyway) taking up valuable screen space.

Couldn’t agree more! This is my biggest annoyance about 1.8 – a release that in general I like very much. If you’re going to dial up the graphical nature of a release and make it more “magazine like” then don’t do things that enable a huge number of pics frames to be empty like in credits. Although fewer and fewer people buy physical magazines anymore, I doubt many would sell if the pic frames on pages were empty…:slight_smile:

Many agree with you.

I got Roon so that I wouldn’t need to spend a ton of time editing my metadata (pictures included). That is what they enticed me with. With artist credits being just text, it was great! All of the information was there. Now my credits are grey circles with repetitive initials. 1/3 of my artists do not have pictures. That is over 1,000 artists in my library! The grey circles with initials is so repetitive. In a row I have “AE” three times: Academy Of St. Martins In The Fields Chamber Ensemble, Amadis Ensemble, American Moravian Chamber Ensemble… all now a huge AE with their actual name and information being secondary. I actually don’t need to see what these artists look like for general information. If I dive deep into that artist for bio and all that, great! give me a picture if you have it! But not in credits!

I just want my text back!

Yes. It’s the biggest regression in 1.8, and that the credits are still available as a list in slideshow mode (or however that’s called) is flat-out bizarre. 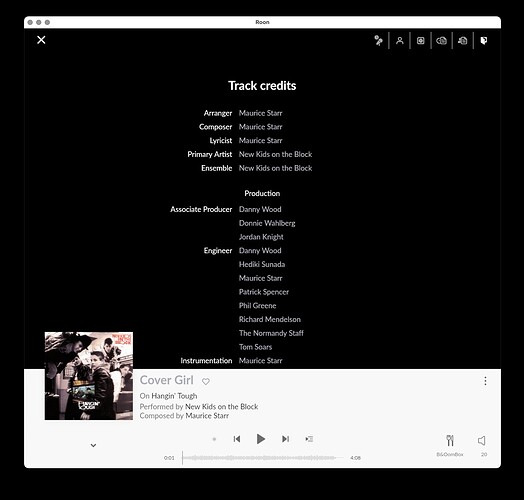 IIRC 1.7 would repeat the performer for every instrument. Now the are displayed once. I think that is an improvement and easier to read. Wins hands down over a simple list.

Take David Sylvian’s Brilliant Trees as an example. The version tab is fantastic; I can see collaborations at glance and link through to other artists.

This is a welcome addition and really starts addressing “musical roots” that many of us have been asking for for some time.

I agree that on that standard credits screen we should see just a list of credits. There are other screens, like on the side of an album review, composer relationships / influences etc where I quite like the bubbles.

So I wouldnt just want to go back entirely to text. I think the balance needs to be right. they went bit over the top with bubbles everywhere.

Here are the featured performers for the Miles Davis box set “The Complete Studio Recordings 1965-1968,” the second great Miles Davis Quintet. The first screen offered includes George Benson, who plays on 1 track on a 7-CD set. Relegated to the second screen, after clicking an arrow button, are, jeez, Tony Williams and Ron Carter, who play on everything.

Could there be software-development or user experience or editorial justifications for this bug? It’s not just a matter of personal taste, so I hope the team picks up on it.

We need an option for a simple list view, @mike and @enno. Thank you.

And how would you have gleaned from a simple list the main thrust of your complaint with the new view? Such a list doesn’t sort according to contribution either.

You can eyeball an entire list and see who plays what, without having to jump to another view.

Credits frequently include “band member” or “Primary Artist” and you would see those too.

This view with the thumbnails suggests hierarchy where there is none. If Valence is meant to be smart, it would at a minimum put artists on the first page who were on 45 out of 46 tracks instead of an artist who is on one track.

In this instance, there is only room for four “key” members of Depeche Mode on my Roon’s Depeche Mode group page. Vince Clarke left the band after one album, but Andrew Fletcher (no pic so it just shows up as “AF” in a circle if you try and find him) is not even an option to display. Perhaps if the icons weren’t so big, they could fit all five of the historical members (at least the current ones?) on the band’s page. Not sure if this is a metadata or UI issue, but it seems rather silly. 1.7 listed all members of the band. 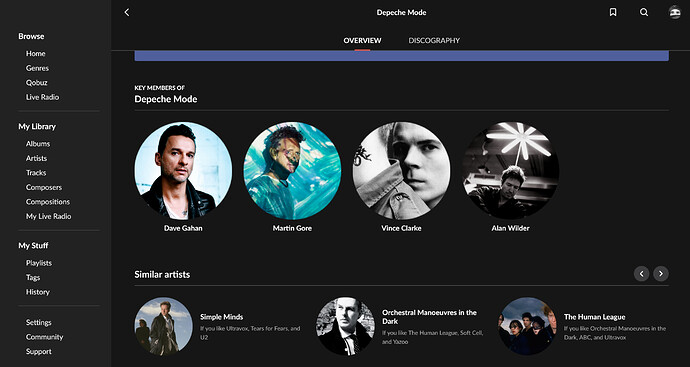 Hmmm. I did not know that Mick Avory (the Kinks original drummer) was in The Rolling Stones, let alone a key member.

It is interesting that this “key members” feature only shows up when I enable Tidal and Qobuz. When I am looking strictly at my local library, which is very large, Roon does a much better job of presenting information. In the past few days since 1.8 dropped, I have been toggling between enabling those outside services and disabling them. I like 1.8 vastly better when I am only looking at my local library.

There is always going to be stray spurious metadata from third-party sites leading to errors like this, that is the nature of using those services, which are exceedingly useful and necessary for Roon.

But when you use up so much space with photos so that you can’t even see all the actual key members and instead are presented with nonsense, then you have made a software design and business error that you should fix.

I didn’t know Pino Palladino was a member of The Who either. Learn something new every day…

Well, Pino actually has played extensively with The Who, after John Entwistle’s death.

However, he isn’t a key member and shouldn’t be in the same row, obviously, as Pete, Roger, John and Keith.

Plus there are other players who have performed more with The Who than Pino, like Rabbit Bundrick.
If. you inflate one occasional non-key Who member, then you are deflating all the others.

These are the kinds of errors that any half-Who fan would never make, and you would not expect computers and AI to get this stuff right. That’s why it is not a good idea to use AI for stuff that a semi-knowledgable person can eyeball as incorrect. It damages the entire enterprise’s credibility.

I do know that – he is a very well known studio bass player and of course should be credited for performing on a handful of who albums as he has, but he is not a member… What’s odd is he’s not a “primary artist” on any the albums he has a credit for. He was just credited as playing bass on some tracks… So not sure what triggers someone to be a member…

When I look at credits it is not to “browse”, I am looking for very specific information that I want to be able to see quickly. Like, I’m listening to a track, hear a great sax solo, and want to easily and quickly see who was playing sax.

In 1.7, I could immediately scroll to the instrument and have links for the sax player(s) to continue my journey. Now, I have to read small little print to find out who played sax. Or worse yet, use the filter. It just gets in my way of exploration and discovery.

That’s not the credits view.

Any Vince Clarke was an important member albeit briefly. Would your argument stack up with Genesis fans? Peter Gabriel should be demoted because he was an early member and missing from their most successful period?

These errors were present with the list view too. I agree that metadata needs improving but that’s not the issue this thread was about.

But this has nothing to do with the new presentation.

In 1.7, I could immediately scroll to the instrument and have links for the sax player(s) to continue my journey.

That I can understand. But there’s a filter for that now.

Totally agree. Now the credit presentation is confusing, and has lost its immediacy. Much better the list, we just want to know with a glance who plays what. And if we wanted photos, in 1.7 we could click on the artist’s name and get more informations. The big grey circles with the initials are just useless, bad looking and space consuming. Who cares if 30% have photos…for that 30% we get also the 70% of disfunctional and horrible grey circles. And that 30% are of artists we all know very well…another Lou Reed photo? Oh, thank you! But i just wanted to know IN ONE SECOND the name of the bassist that plays in the album or in that particular track. Not to scroll or filter for that basic information.