Currently I only can filter the new releases by the main genres. So it’s impossible to get a list of new Rock albums as they are mixed with Pop. I know, that the metadata from allmusic.org is organized like this, so it’s not in your hand. Because of this it would be nice to be able to filter sub-genres. It could be implemented by holding the main genre to open a drop down menu: 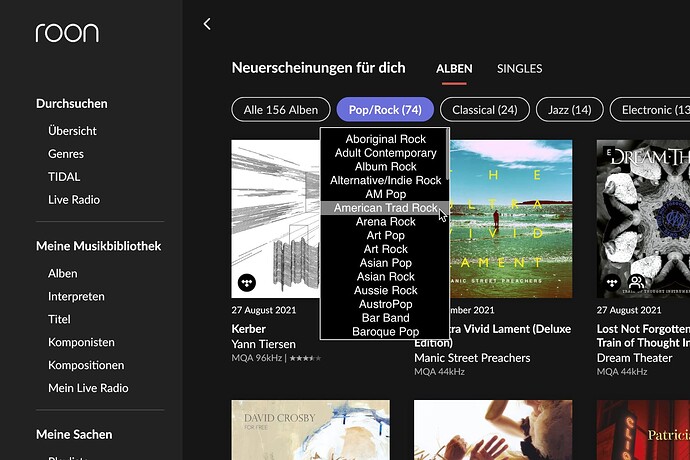 As an alternative you could add one button to the genre filter bar which we can customize.

I opened a similar feature here, not quite what you are describing as I was thinking of each release being tabled with one or more sub-genres (on the new release page only).

The ability to display sub or secondary genres on Tidal / Qobuz ‘new releases’ page. (either permanently or on ‘hover over’) Obviously this feature could apply across the whole Roon interface. But I expect it would soon become annoying when viewing your own personal library or searching for music. But when viewing the Tidal / Qobuz new releases page it is very hard to tell (without clicking though) which sub-genre an album belongs to as the top level are almost too broad to be useful. I expec…

But no reason it couldn’t work alongside a genre dropdown as you describe.