The title says it all. I have followed the guide for converting the codepage, but as I expected the tags where already in unicode. It is Roon that cannot display these languages. Japanese and Chinese display just fine. I am on the latest version of Roon on Mac. Any chance we will have full unicode support one day, specially middle-eastern languages?

Here is a screenshot: 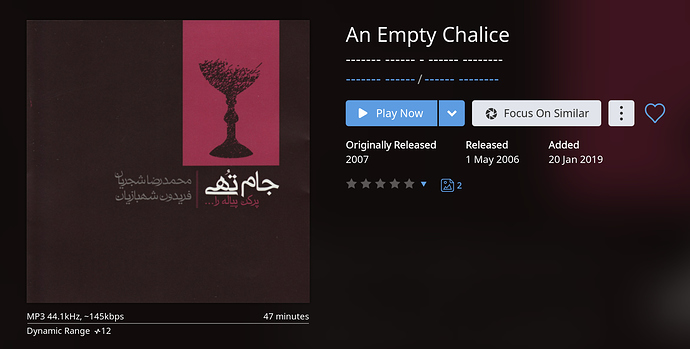 An additional point: I have just got a Qobuz subscription and have noticed this album also exists on Qobuz with transliterated metadata. Yet, Roon automatically identifies the album using MusicBrainz meatadata, and in that database the names are in international characters (the transliterations are used for sorting), and thus automatically switches to this view with dashes. I haven’t been able to revert this, even when I tell roon to trust the file metadata rather than roon metadata. Deleting my originals, cleaning up, etc, had no effect.

Can I please ask you to send us that album so that we can take a closer look at this issue? I will PM you shortly on how to get it over to us. Also, what Qobuz albums are you seeing with this behavior? Please provide a few examples.

Thanks for the rapid response, Done!

For Qobuz samples, anything with Persian or Arabic works. For instance: https://open.qobuz.com/album/m2emgind19qwc

For the case that the original Qobuz track has transliterated tags and Roon “corrects” the tags using its own data into something that it can’t display, I can’t find more examples because most Iranian albums are tagged in English and also most are not on Qobuz. I’m sure if you ask someone who listens to Arab music, they will find you examples much more easily (much bigger collection on Qobuz and better metadata coverage in public databases).

Good to know. Thanks!

Here is another example I discovered yesterday. Again, it is Roon that fetches the unicode tag information (my files only contain Latin script tags), and then it fails to render them. 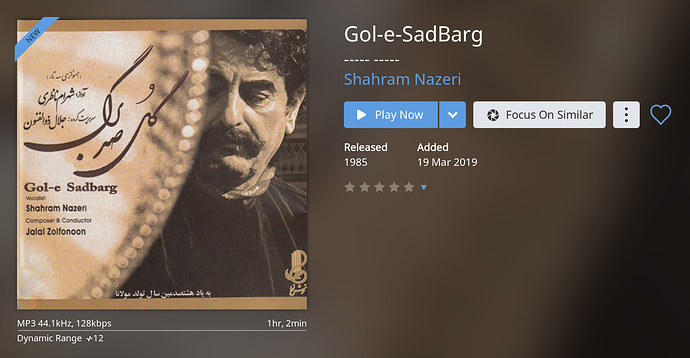 Thanks for sharing another example of this issue.

I took a look at our internal tracker today, and I can see that your ticket is still in our development queue. This means our developers are still planning to look at this, but we don’t yet have a timeframe for when that’s going to happen.

Once the ticket has been scheduled and work begins, I’ll have a better sense of timing here. Thanks in advance for your patience!

I noticed the same problem shortly after I purchased a Roon lifetime license. I have lots of albums in Arabic, but they are either displayed as dashes, or Roon pulls a transliteration from some server. I’m very unhappy with that and would love to see a remedy soon.

Since East Asian languages display properly, I thought it must be a lack of support for languages that are written right to left, but no: I have albums where the titles appear in Hebrew. If it’s just a missing font for Arabic, why does it take so long to solve it?

An update would be appreciated.

Thank you for your interest into this issue. I took a look at our internal tracker today, and I can see that this ticket is currently in the dev team’s backlog.

This means our dev team is still planning to look at this, but it has not reached the queue yet, and I can’t quite comment on when it will be addressed.

I have noted your additional feedback with the team, and as soon as I have any new details to share I will be sure to let you know in this thread. Thanks!

We’ve just released Roon 1.7 (Build 500) which includes changes that should improve this behavior. Please give it this a try and let us know how it goes!

[Vālence%20Blog%201200x500] Roon Labs is proud to announce the largest project we’ve ever undertaken. After two years of focused design and engineering, we’re unveiling an entirely new technology we call Vālence. Vālence is a system built on a massive new cloud database, which uses machine learning algorithms – designed with our passion for music – to model the many dimensions of relatedness more deeply than ever before. And because you use Roon to explore, collect, and listen to the music you…

Great news, thanks a lot! It seems to work perfect now.

@Christoph_Terhechte Sorry that it took so long to add Arabic script support. The previous Hebrew support was a bit of a hack and never really did the correct thing (it was some simple code that mostly just tried to detect runs of Hebrew characters and then reversed them). The same approach would not have worked with Arabic script due to the large number of ligatures involved in properly shaping the script. The new RTL language support should be much more robust and properly handle mixed direction text, do proper line-breaking, as well as do the right thing regarding punctuation. Unfortunately, nobody on the engineering team is fluent in any RTL languages, so it would be great if you let us know if there are any bugs in our implementation.