OK Music Fans! We’re down to the last week of the challenge! I’m bringing you some aural respite after the overwhelming response to Barry Gibb and brothers (apparently only a couple of us actually like the music!). So this time no falsetto to be found, and the music is decidedly plain.

Only 21 on this album, the highly acclaimed Colter Wall (Steve Earle claims that Colter is the best artist and songwriter he’s seen in 20 years) is channeling Johnny Cash, a sound he cultivated over the next couple of albums. 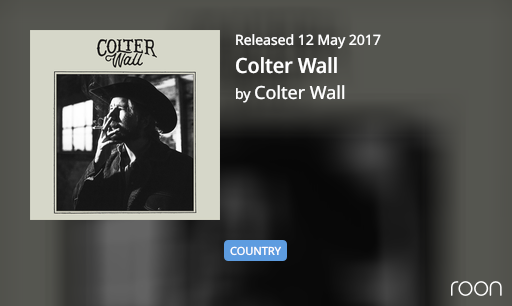 I’m hoping we won’t have any problems accessing this album in the UK. I checked online and it seems to be available in both Tidal and Qobuz, so my fingers are crossed.

Let me know what you think!

If you haven’t voted on yesterdays album, get your vote in here: Day 23

I can see it on Tidal in the UK

Nice songwriting even if the themes are just a bit depressing. I don’t care for his singing but I can see how many of these songs will shine when covered by other artists. Definitely a songwriting talent to watch. Thanks!

Should be there. I’ve previously added and it’s listed.

I said I CAN see it

This is another one that would be 4* for me but this time didn’t quite do enough for me to give it the full five dinks.

Just a touch too laid back for me but works listen to it again with the lights low and a nice alcohol free beer on the go.

It’s a couple of years since I last played this album. How old is this guy? There’s maturity in his lyrics and Voice. It never rises above the gentle rumble of his baritone; mostly accompanied by acoustic guitar and the occasional thump of the bass drum. Love it! This album deserves a couple of listens, it really is that good.

My picks: Motorcycle*, Kate McCannon, You Look to Yours and Transcendental Ramblin’ Railroad Blues.

*I said “Well, I figure I’ll buy me a motorcycle” … and the answer was a resounding NO! I do miss my Bandit.