Dealing with artist names ("Beatles, The" versus "The Beatles" or "Simon, Paul" vs. "Paul Simon")

Would it be possible to have Roon deal with artist names in such a way that move examples are seen as the same, and only show up in one way? Reason - those, like me, who have built big databases in the past often named artists like “last name, first name”. Now, Roon deals nicely with “first name last name”. But when it sees both, it doesn’t"t put it together, very annoying. And renaming all my artists is a BIG task…
Can it be done?

Should be irrelevant if you let Roon do your album identification.

But if it’s having problems because of your metadata, use the batch convert feature of mp3tag. It shouldn’t be too difficult to write a custom filter that resolves lastname, firstname back to firstname lastname.

It starts getting difficult when dealing with artists from different countries, and when a release is credited to multiple artists and exception cases. Even in the example only ‘Simon, Paul’ is a ‘lastname, firstname’ conversion, ‘Beatles, The’ is a case of removing the leading preposition. Both are values that would usually be stored in the ArtistSort field

If you simply remove these sort values from the artist field but don’t add to a artistsort field you could have the situation that if you want to play these tracks outside of Roon (e.g iPod) they will no longer be sorted as you would be used to.

There is also the problem that sometimes the same artist is referred to differently on different releases e.g Prince, Of course this is personal choice but whilst it may seem a good idea to reflect accurately what is on the release, it usually better to set the artist the same whatever release they are on.

The alternative to writing a script is to use automated tagging application to identify your songs, but maybe just configure to just update your artist fields and artist sort fields to get them to a more consistent state before adding into Roon.

Thanks Paul. OK, I will try the latter. How do I do this in Roon?

Actually, for 10k+ albums, it IS an issue

This type of problem has come up on a few occasions since I started using the forums over the last year.

If you want to add these for all your collection, I would recommend using the ‘Actions’ function in MP3TAG, which I used on a collection of 2500 albums. The process I went through was as follows (MP3TAG commands also shown):

Another reason I did this, was to ensure that artist names were used as I wanted with UPNP - specifically MinimServer and Naim’s IOS App in my case.

As for lastname, firstname – I decided to stick with FirstName LastName throughout, so didn’t need to make any changes. I would expect MP3TAG to be able to handle these scenarios as well. If you want to explore further, I’d be happy to experiment with it for you and post some custom ‘Actions’ for you to try.

All the best
Nick

Thanks Paul. OK, I will try the latter. How do I do this in Roon?

You cant do this in Roon, you would need to use a separate tagging application. If you write a Mp3 Tag script as suggested that might be adequate for a proportion of your artists names but you are making an assumption that won’t always work (i.e ‘The The’ to ‘The, The’ would be wrong). Automated taggers that use MusicBrainz as a source have the advantage that each artist has a sort name, so that instead of guessing the sort name the tool can can just use the (usually verified) sort name for that artist. Apart from my own Jaikoz and SongKong tools you could try MusicBrainz Picard

Would it be possible to have Roon deal with artist names in such a way that move examples are seen as the same, and only show up in one way?

Have Roon ignore your tags and you’ll be sorted.

Bliss, is only Windows, right? 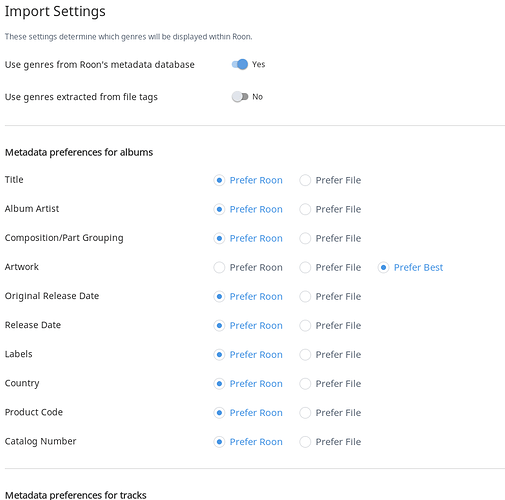 [quote=“evand, post:9, topic:28677”]
Have Roon ignore your tags and you’ll be sorted.
[/quote] That won’t necessarily work with ARTIST credits. They could still end up being used, depending on the metadata that Roon has in the Cloud.

No. They have Mac, Linux and Synology NAS packages.

That won’t necessarily work with ARTIST credits. They could still end up being used, depending on the metadata that Roon has in the Cloud.

I’m guessing you’re referring to an instance where Roon has no metadata for the artist/album and thus uses tag data?

Yes. And, in the case of composers, we (currently) use anything from track COMPOSER tags that we don’t have in Roon metadata.

If you’re handy with SQLite and have a Linux OS I can point you to a Python script that will read all tags from your entire library and write the lot to a SQLite table. You can sort and browse the resulting table using SQLiteStudio or other sqlite table browser to see what needs changing and run a few replace queries to make the necessary changes. The same script can then write the database contents back to the underlying FLAC files… and voila!

Bliss is a good tool but I dont think Bliss support Sort tags, so it may be able to fix ARTIST, ALBUMARTIST tag but wont add ARTISTSORT, ALBUMARTISTSORT tags, also I dont think you can really choose what fields it modifies and restrict to just artist fields.