Devialet Expert Pro 440 not any more available as Roon Ready

It is really crazy. I lost the Audio Input of my Devialet Roon Ready.
The alternative Devialet ETH is still available.
Reset, unplugging from power. Nothing revived the Devialet Roon Ready device for Roon.
Any idea or is it an issue of Devialet. Could it be a licence issue between Devialet and Roon?
Anyone else with this experience?

Thanks Mike for the advice. I already tried these options twice. It is a very strange behavior of my devialet.
The source Ronn Ready is still availble on the display of the devialet. I have no glue what happened.

It would help to know your set-up Wolfgang. Do you have a NUC, Nucleus, PC or Mac as your Roon core? Also, can you give us a screenshot of your audio set-up from Roon? I have shown my set-up with Devialet as an example. 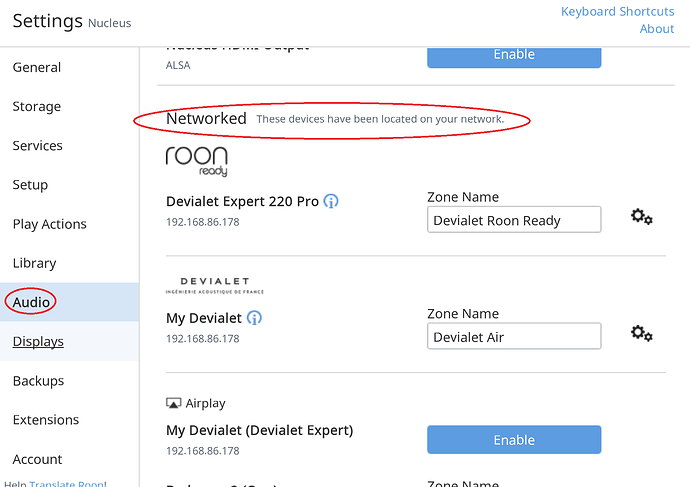 Thanks everybody to support me in that issue.
I use a synology NAS with the roon core. It worked for more than one year. The Roon Audio devices have been founded without any trouble in the past. Since last night only these network devices are left. 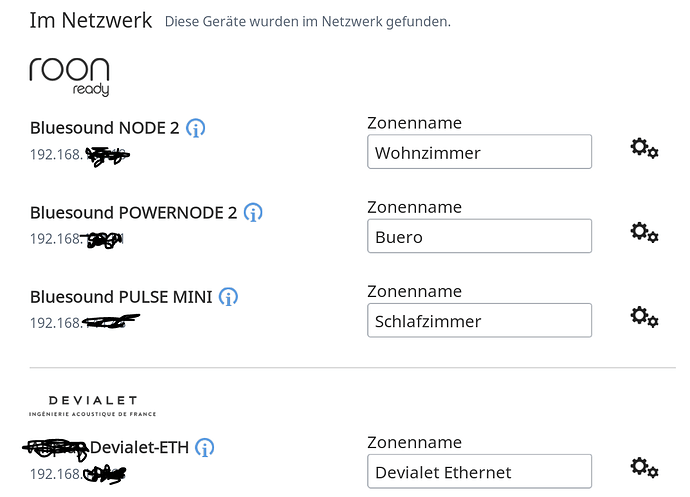 Thanks to all.
The problem was in the software. I installed firmware and dos again (same version I used before). Now Roon ready is back again.
This is not a normal behavior that parts of the software are lost. Devialet has still a lot of software things to do. I wish Devialet would be as stable as my Bluesound components.

Any idea why this happened? You had the same firmware on both 220 Pro?

but i was just able to hit power on the remote and when i turned them back on, it was fine and all is working… playing with SAM now since it seems my speakers are now supported!

Congratulation for your Expert 440 Pro. It’s a very fine device…

Just to make sure, check for both units that both firmware and DOS are the current ones (FIRMWARE 13.1.3 + DOS 2.2.4). Sometimes firmware updating is failing to update DOS also.
Also full Devialet restarting (unplug from the mains) and Roon Core restarting is helping (sometimes Roon Core is getting confused after Devialet firmware installation).
Enjoy listening!

Interesting thread… I had a somewhat similar scenario last week… I was listening to music via Roon Ready to my Expert Pro 440. The music suddenly stopped and my Roon remote on my iPad said to select a Zone. Roon AIR was still there My Devialet Roon Ready zone was gone and when I went to Roon Setup - Audio, it wasn’t there either. Not surprisingly, a power cycle of my 440 brought it right back.

Never saw that before and it hasn’t happened since so I didn’t bother logging a support request. FWIW, RoonServer installed on an i7 Win10 PC all connected via ethernet. I do have a 100mbps switch in front of my Devialet to get around the gigabit ethernet issue with RAAT on my Expert Pro.

Just to make sure, check for both units that both firmware and DOS are the current ones (FIRMWARE 13.1.3 + DOS 2.2.4). Sometimes firmware updating is failing to update DOS also.

Yah, I upgraded the firmware on both and checked… both upgraded and are good.

The SAM was a bit weird at first… could I hear it, could I not?

About 2 hours of listening now, and it feels really nice… the lower frequencies feel “further away” and the whole experience is far less fatiguing.

FYI, using the Expert+SAM w/ Totem Tribe Tower speakers… some of my favorite sounding speakers before this change-up.

In my opinion, SAM is a great concept. Its implementation has many pitfalls, and the end result depends on many factors. I leave you the joy of testing various SAM% and SAM ON/OFF settings…

Going back to Roon: did you try to connect the two units as independent amplifiers to Roon Core and group them in a Roon zone? I tried this, in various network configurations (with/without dedicated switch, directly in the router, with separate subnet), and there were always temporary interruptions to one audio channel, independently and randomly. This may be due to the current Roon - Devialet over Gigabit network issue, I don’t know.

@danny Maybe you face another bug of Devialet firmware that is causing major troubles. Do you have in the configurator Ethernet as well as WiFi activated.
This is causing the device to loose IP address from time to time. Just activating one (Ethernet preferably) should solve this part.

did you try to connect the two units as independent amplifiers to Roon Core and group them in a Roon zone?

No, I set them up as one 440pro. If you do what you are talking about, you lose most of the benefit of each 220 knowing it can kill half the electrical components.

Do you have in the configurator Ethernet as well as WiFi activated.

I do. I’ve had no issues related to connectivity. I’ve tried both Ethernet and the WiFi.

No, I set them up as one 440pro. If you do what you are talking about, you lose most of the benefit of each 220 knowing it can kill half the electrical components.

Where did you get this information from? Which electrical components are killed? In both variants the amplifier is set to mono mode and uses the same components (if the settings in the configurator are made correctly).

Where did you get this information from?

I’ve heard this from 2 people that worked at Devialet, one an vp of engineering while he was still there, and recently again from an ex-employee who was at the top of the food chain over there.

Which electrical components are killed? In both variants the amplifier is set to mono mode and uses the same components (if the settings in the configurator are made correctly).

I can ask for further information.

Another annoying bug in the configurator for Dual Mono is that you have create a a new one and not edit an existing one - which is causing various problems. So assure to start with a new configuration from scratch each time you would like to change something.
This has been reported many times over at Devialetchat too. There should finally after over a year be a new firmware coming out (so you know anything more or could ask about that too) that should address hopefully all these bugs as well as the Roon Gigabit Ethernet one etc