Description Of Issue
I had a friend rip a lot of my SACDs. The file format is he ripped them to is “.dff” and I copied the album over to my NAS drive that Roon reads.

Roon seems to read some of these albums but not others. I cannot figure out why, any suggestions on how I might trouble shoot this.

I had the same album in the directory which I had ripped the redbook layer to FLAK. Is it possible that Roon has decided to only show that file and not the new one added thinking that it was a duplicate?

I prefer DSF to DFF as it allows tags. Roon does see DFF files though.

When he converted the files did he make sure that the DST compression was removed? 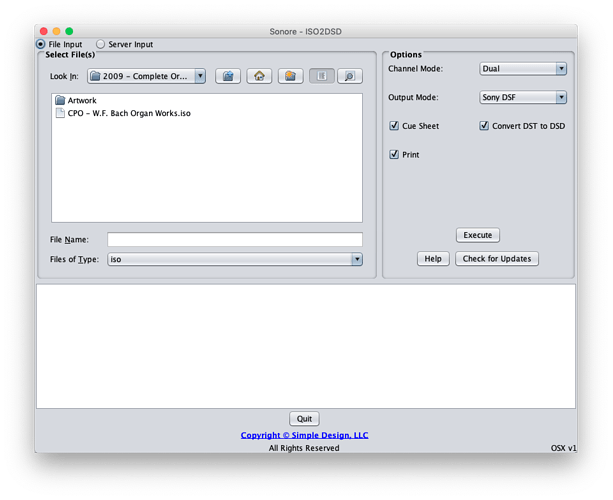 One of the few programmes I know that can go DFF to DSF natively (ie without a PCM conversion) is VinylStudio. It can also go DOP to DSF.

I agree the preferred is DSF due to the metadata however, my other DFF files such as Bill Evans show up in Roon and has art work and all the tracks identified … so somehow either the metadata is being included during the rip or Roon just identifies the album and adds the appropriate info.

Still can’t figure out why some of my DFF files come through perfectly and a few others do not show up at all even though they are on the same NAS drive in a similarly named file folder.

Have you looked at whether they are DST compressed? Do the tracks appear in the Settings > Library > Skipped Files listing in Roon?

Bingo, thanks. Yes they are listed as “Audio Stream Format Not Supported”. The question is why are some and some not? I believe he has ripped them the exact same way each time. I will have to ask him to double check to make sure my assumption is correct.

Would you mind sharing one of these files with us so we can take a look? You can upload the file here:

Bingo, thanks. Yes they are listed as “Audio Stream Format Not Supported”. The question is why are some and some not?

The same poster twice has pointed you to DST compression. Despite that, you appear not to have investigated your files. For DFF, Roon supports only uncompressed files. You need to double check.

I do not believe the DFF files that were transferred were compressed. Many of the albums had to be sent to me in multi parts due to the large file sizes of the DFF files. They were in DFF format to begin with and transferred as DFF through Wee Transfer. They arrived in a zipped format which I unzipped prior to putting onto my NAS drive. Unless Wee Transfer’s protocol of file transfers some how compresses files, which unzipping once receiving does not undo then I am still confused as to why the DFF files that were physically moved from one hard drive to another are seen by Roon and the ones sent via Wee Transfer cannot be seen by Roon. This does not make sense to me and I am not reading any responses that are explaining why unless I am missing something, which is possible. I am not that tech savoy when it comes to the minutia of file transfer, compression, zipping and unzipping. I just use the programs without much technical know how into the internal workings. As far as “DST” compression, I have no idea where this might have taken place. I was told by the person who transferred the file that he ripped the SACD to DFF and he took that DFF and transferred it via Wee Transfer to me. It arrived in my mail box after downloading from Wee Transfer as a zipped file. I then unzipped into a directory. I then saw the entire album and each file was a DFF formatted file, like the ones that work are. I then moved that directory into my NAS drive where all my other music files reside, along with the other DFF files. I did not move the original zip format file but deleted it after unzipping it. Where a “DST” format might play into this I am not sure, can anyone explain as to where it would show up and what that affect would be if indeed it is playing into the mix?

Dylan,
I uploaded one of the DFF files that is not being seen, would it be helpful to you if I also uploaded a DFF file that is being seen so you could look at both together? If so I need another link sent to me that is functioning. I tried to just send you the working DFF file but the upload link had expired after sending the one that isn’t being seen.

Thank you for looking into this for me.
Michael

To reduce the space and bandwidth requirements of DSD, a lossless data compression method called Direct Stream Transfer (DST) is used. DST compression is compulsory for multi-channel regions and optional for stereo regions. This typically compresses by a factor of between two and three, allowing a disc to contain 80 minutes of both 2-channel and 5.1-channel sound.[24]

As the piece I’ve just posted shows, DST is used for all tracks on multichannel SACDs (including the stereo tracks) and is optional for stereo-only SACDs.

It’s nothing to do with the transfer of your files, it’s already embedded on some of the physical SACDs that your friend ripped for you.

You can also see that for stereo SACDs DST is only optional. If your friend processed all the SACDs in the same way I’m guessing that he did not tick the “Convert DST to DSD” box that I posted in my first reply.

This would result in the stereo DFF files for those SACDs having both stereo and multichannel being DST compressed as they would have been DST compressed on the original SACD.

Wow, you are a true audio Sherlock Holmes! I really appreciate the effort you have put into trying to resolve this “Mystery to Me”, sorry Fleetwood Mac reference. I believe you hit the nail on the head. Many of the discs I lent my friend to rip to SACD (2-channel) for me were discs that also had a SACD 5.1 layer. If I understand you correctly this ripping could have triggered a compression that Roon is not going to work with. If I also understand correctly the work around is on the ripping program there is a check box to tick that would then convert DST to DSD and all would have went well, no compression would have taken place and then Roon would have read the dff file like it is on the other dff files that were not taken from dual layer SACDs that included both 2 and 5.1 layers.

If I am understanding all this correctly, you’ve done a great job in explaining it clearly. Thank you. I will reach out to my friend with this info and see what he has to say and I will do some more intensive investigation of the files he did rip in this batch to see if Roon is reading those dff files that were taken strickly form 2 channel SACDs. If this is the case, which I suspect, based on what you have deducted, then those files are showing up and playing fine. Again thank you for your time.

Michael, you’ve sort of got it. All the music on multichannel SACDs (regardless of whether it’s the stereo or multichannel tracks) is already compressed on the disc itself using DST. That’s how they fit in all those channels on the SACD layer.

When you rip those discs to ISO there is no change in compression because an ISO is an exact copy of the disc. Extracting the stereo files from those multichannel discs without decompressing the DST to DSD means Roon can’t read it. What the “Convert DST to DSD” tickbox does is trigger a decompression for DST files to DSD. A stereo SACD without DST would just unpack to DSD even with the box not ticked.

An analogy would be if some CDs had FLAC files on and others raw PCM, and Roon could only read raw PCM. When you ripped the CD you’d need to decompress the FLAC CDs to PCM to get Roon to see the music files. The PCM CD would just unpack normally.

It’s only a hunch, if you post some examples of what SACDs are in your skipped files in Roon and what are being seen it will be easy to test.

If you do need to reconvert the files I’d go DSF rather than DFF.

Yes this does seem to be the issue, based on the SACDs that were strictly 2-channel can be seen and do play fine; Bill Evans and Poco. Interestingly, although they are formatted as DFF, Roon does show the art work and track names correctly, even though these file are not DFS. Is there a reason for this because I was under the impression that the meta data would not be attached to a DFF formatted file?

The proof will be sent to me later tonight or tomorrow when he completes the re-rips of the SACDs that have both 2-channel and multi, but this time clicking the magic button. Once he sends them to me I will give them a shot and update you on our success, which I believe they will be.

Can’t thank you enough for looking into this and figuring it out, I will see/hear for sure tomorrow or the next day.

You get the artwork and track titles either because Roon has recognised the album and supplied them remotely, or because it has parsed your file names and there are scans in the album folders.

You can check where metadata are coming from by going Album > Edit > Edit album.

As a word of warning if you do go DSF you’ll want to check the metadata in the files. SACDs often have poor metadata, commonly the Artist is actually the Album title and I regularly find the Genre is “Other”. MP3Tag is a great free tagger that has both Windows and OSX versions.

Dylan,
Thanks for sharing your knowledge and sticking with me through my troubles and frustrations. Your suggestion was tested and it worked beautifully. I have all the albums now in dff format and Roon recognizes and plays them perfectly. Out of the dozen or so albums only one had trouble with the meta data or lack there of and I had to manually fill it in and add the artwork. All this was done through Roon which I have found is easy to work with in correcting art work or album data.

Now if I only knew how to take an album that is a two disc set (disc 1 and disc 2 each on its own tab but under the same listing), but was separated when brought into Roon and now shows as two separate albums.

Merging: The Roon KB is your friend.