Over the last few days, I’ve been dabbling with DietPi: a Raspbian based, very minimal distro for the Raspberry Pi (as well as a host of other boards) that offers a few advantages over Raspbian Jessie Lite:

Nice and handy configuration tools (with the option to install an extensive software collection if desired, optimised for the Pi): 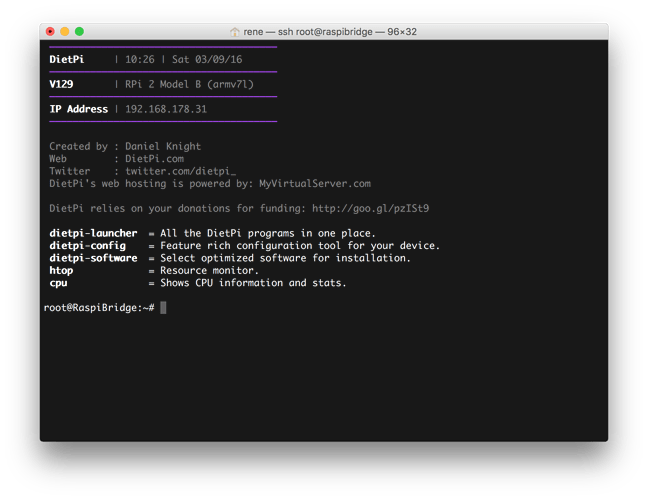 Menu-driven configuration, including tools for selecting your audio HAT: 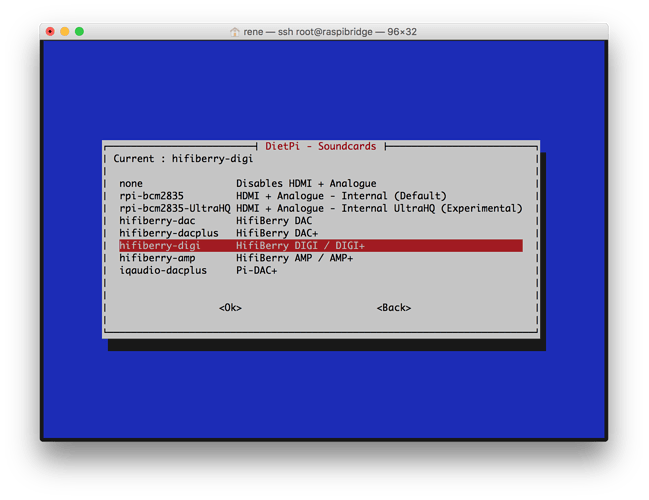 as well as your WiFi: 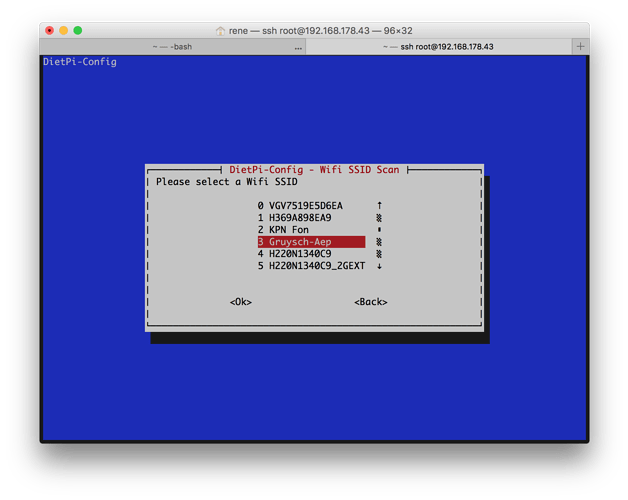 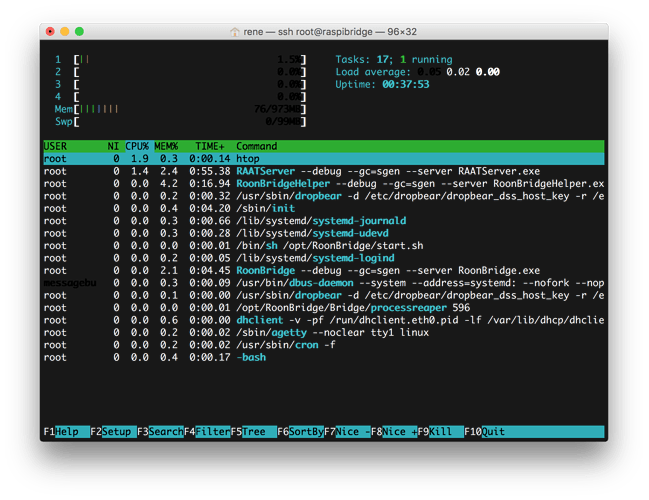 By default, DietPi writes its logs to RAM, clearing them every hour. This makes your Pi more resilient to improper shutdown (ie. yanking the power cord :-)), since there’s basically nothing being written to the SD card while operating.

Before installing Roon Bridge, the Alsa tools must be installed:

For now, I’ve moved all my Pi’s to DietPi – they’ve been running flawlessly so far. For those that do not think of toying with a Linux command prompt as an enjoyable passing of time or fancy the idea of a lean-and-mean Roon Bridge, DietPi may be well worth checking out.

Awesome! Any thoughts about doing this for Stretch for those of us who want both NAA and RoonBridge?

Just to be clear, in case there’s any confusion: I don’t have anything to do with the creation of the DietPi distro (it’s a labour of love from Daniel Knight) – I’m just sharing my experiences using it as the foundation to run Roon Bridge on.

Not sure if it will break anything DietPi related – and be aware that Stretch is still unstable/unfinished (I’m aware of the requirements of HQ Player’s NAA, but that does not change the way things are). Also, when running NAA and RB in parallel, you must close HQP in order for NAA to release your Pi’s audio device so Roon Bridge can take over.

In His Master’s Voice:

I gave this a try tonight, and although RoonBridge is running on the Pi and looks happy, it’s not being detected by Roon core. Any idea why this might happen?

Is your sound card properly activated? (You can check by typing ‘aplay -l’ in the terminal).

I found that depending on the order of the configuration steps, my PiDAC+ was not activated, even though it showed as such in the menu. Reselecting and the subsequent reboot solved this.

You were exactly right. Thanks!

Rene, any technical or audible advantages other than trying for fun?

Is it straightforward to get Dietpi on there?

Still sticking with the manual system rather than shifting them to RoonReady?

I’m about to add a new pi, so not sure what to go with. I like the simplicity of RoonReady, but I do like being able to ssh in and see what’s going on too. I’ve had the odd issue with my microrendu dropping off the network, and being locked out is actually quite frustrating as your options are pretty much power-cycle device or start power cycling network boxes. You never really get to the bottom of the issue. That said the raspberry pi has been rock solid so far and never dropped off!

I won’t dive into a discussion on audible merits: let’s just say that for me the RoonReady images from IQAudio and Hifiberry, the ‘regular’ Raspbian install and DietPi outlined above all sound great to the extent that in my system differences are negligible.

So they all sound the same (more or less) but are more convenient. I won’t be able to tell anyway as mine are used with portable speakers rather than the main hifi, although I will try it at some point I’m sure.

I downloaded dietpi ready to test, and at the same time thought I’d get the roonready images for hifiberry and iqaudio, so I can compare. I have to say I wasn’t that inspired by either. Firstly, they’re huge (hifiberry 1.5GB!), and they aren’t accessible or as you say auto-updatable.

I’ve decided I’m going to go dietpi with the new iqaudio initially, unless there’s anything hardware-wise that isn’t supported (or supported as well) compared to the RoonReady.

Thanks for all your posts on this stuff Rene btw - it’s been a great resource. Where do you even hear about something like dietpi?!

@RBM, got my Pies also on Dietpi.

Everything works OK, except my USB DAC. It won’t play DSD (DoP) files after this update.
Running on Raspbian Jessie it use to work.

Well, I have been fiddling around.
The solution was installing the alsa and ffmpeg stuff through the install menu.

That would have been my first suggestion – but good to hear you’re up and running already!

I thought I could get away with only installing alsa-utils as per your instruction/suggestion. That worked apart from the DSD. Apparently for DSD you need the lot.

Thx anyhow for the reply.

Well, the Pi3 arrived today so I built it with the IQaudioDAC+ and decided to follow the master @RBM and go dietpi.

All worked fine. Was a bit unfamiliar with the interface and the GUI controls and what did what exactly (Id become strangely familiar with raspbian) , but got there in the end. Took the advice above and just installed ffmpeg and also alsa in the software-install GUI. It did seem to add a hell of a lot of stuff so might go back and strip it down and see if iqaudio DAC works in DSD without it. But thats for another day.

Wasn’t 100% convinced by the IQaudio case, but thats a story I’ll add to my original topic about the Pi experiments.

I cant listen to it yet as the speaker didn’t arrive, but its ready to go and shows up in Roon. I’ll be interested to see if I get any buzzing from the IQaudio. 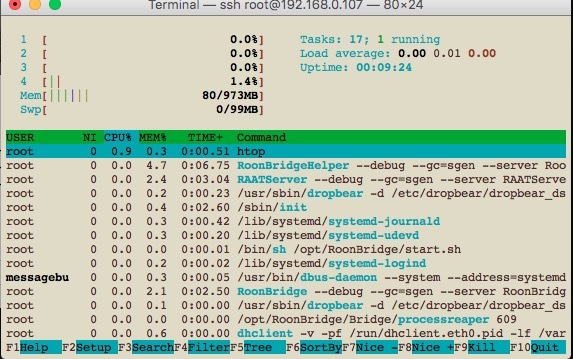 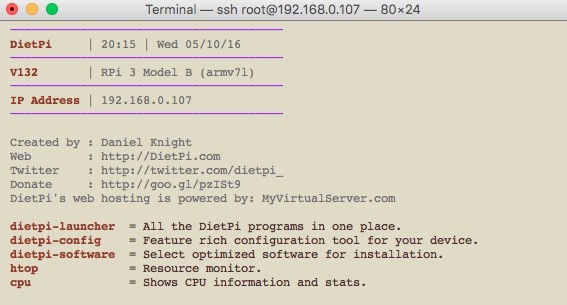 Nice! As the IQAudio DAC does not so DSD, you really only need alsa-utils for RoonBridge to run.

I currently use the PiDAC+ in my headphone setup – with happy results.

Nice! As the IQAudio DAC does not so DSD, you really only need alsa-utils for RoonBridge to run

Mmmm, it shows up as DSD64 in green in Roon settings when you set DoP.
It’s not like I really play much DSD as the few things I have are rarely listened to, but just curious since it looks like it does according to Roon. Will see what happens when I send it something - I forgot that I can still send music without having a speaker attached!

192kHz PCM is the bandwidth required for transmitting DSD64 via DoP – that’s why it shows in yellow, I guess.

I don’t especially care for DSD, but let’s not start that discussion here…

One other interesting anomaly is the device line art.
Using Dietpi/RoonBridge with iqaudio - the device artwork shows like its a RoonReady device.
Using raspbian/RoonBridge on the hifiberry - no artwork, just a speaker.

Rene I notice from your screenshots you ssh by machine name. Do you run a DNS at home?

One other interesting anomaly is the device line art.
Using Dietpi/RoonBridge with iqaudio - the device artwork shows like its a RoonReady device.
Using raspbian/RoonBridge on the hifiberry - no artwork, just a speaker.

If you use Roon Ready images, you get device specific line art (since the image is built and supported by the hardware manufacturer). If you use the generic Roon Bridge image from Roon, you just get the generic icon.

I’m using the Roon Ready image from HiFiBerry on my RPi with a Digi+, and there I get the nice line art. There are pros and cons to both routes:

Cons:
Roon Bridge: only a generic device icon shown in the Signal Path, since Roon Bridge is designed to work with a wide range of devices.
Roon Ready: no automatic updating of software; must be manually updated by the end user when new release is available from the hardware supplier.

Personally, I like the line art icon/product manual feature of the Roon Ready image; but I have to say that the HiFiBerry Roon Ready image does seem sensitive to power outages, and has required reflashing a couple of times.

If you use Roon Ready images, you get device specific line art (since the image is built and supported by the hardware manufacturer). If you use the generic Roon Bridge image from Roon, you just get the generic icon.

Yeah, but what I’m saying is both my pi’s are using RoonBridge (different operating systems), yet one has line art like RoonReady

Roon Bridge: only a generic device icon shown in the Signal Path, since Roon Bridge is designed to work with a wide range of devices.

I generally don’t like the RoonReady line art - at least in the zone selector (the signal path is ok). Having a zone looking like a raspberry pi makes no sense to me - the average end user (maybe not the person that setup Roon) doesn’t care what’s behind the speaker - would much prefer user replaceable custom graphics.

I wonder why RoonReady doesn’t specify a requirement that it be able to update itself, at least on capable platforms. The pi’s are sort of a bit of an anomaly as RoonReady devices IMO since mostly they’re sold as DIY kits anyway. (Apologies to Rene, will take any further discussion over to my own topic!