Difference between "with various artists" and "appearances"

As the title says - what is the difference between “with various artists” and “appearances”?

To my ears (and likely others naive to Roon) they sound like the same thing. I wonder if it’s worth bringing these two headings together?

To my way of thinking the answer is no, I definitely don’t want them combined - appearances are instances where an artist has collaborated on another’s album e.g. Tom Petty contributing vocals to a track on a Stevie Nicks album, whereas Various Artists would be a compilation album that contains tracks compiled together using songs from a variety of artists e.g. Best of the 90s.

Thanks for clearing that up and yep I would agree with you.

also, go visit Sting’s artist details… he appears on a ton of “The Police” albums obviously… but those are not really various artists, they are The Police!

if you have enough The Police, we will actually break those albums out into their own section called “with The Police”

[quote=“danny, post:4, topic:2424”]If you have enough The Police, we will actually break those albums out into their own section called “with The Police”[/quote]Like this … 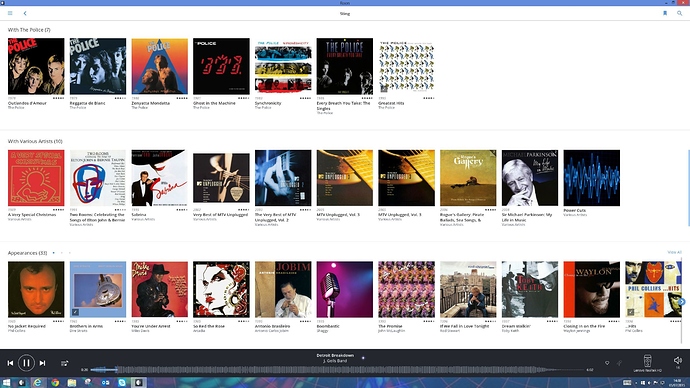