Question: do you think you’ll have the same discomfort two weeks from now when you become more familiar, or will it always feel like it needs “your touch”?

I’d say I’m already fine getting around the new kitchen - it’s more like I will always be frustrated because I have to walk halfway across the kitchen to get something I always need that should be right at hand. But the food in the end will taste the same and I’ll go on preparing it. What choice do I have? Even though it’s not my ideal kitchen, I’ve already paid to use it for a lifetime.

I will say, I thank Roon for working robustly and upgrading easily. Trying to get a new version of Microsoft Office to open on my Mac is… well lets put it this way, I’m looking into other options (Apple or third party. Fortunately didn’t pay much for it as my wife works at Microsoft. Not sure why some things have to be so hard.

No, I actually love change, and was looking forward to a newly redesigned Roon. I’ve been calling for a UI change for ages. Unfortunately what we seem to have gotten is a pastiche of half baked layouts that often feature the wholly wrong elements mixed with the some of the worst of the old. Change just for the sake of change isn’t necessary. So, yeah, a lot of us are frustrated. Especially those of us in the US who can’t even take advantage of the new Qobuz integration, one of the primary positive focuses of the update. Not Roon’s fault I know.

I work in the software biz. I have a saying that a user experience needs to be about 15 times better than the current version in order for people to love it out of the box. This thread seems to show that it’s true (as has much research on my part).

I don’t really see any problems other than the now playing screen, and they’re re-introducing large album art.

I very respectfully suggest patience and flexibility. Give it a couple of weeks, and then document your concerns. If you do that, please ensure you provide a solution too.

I very respectfully suggest patience and flexibility. Give it a couple of weeks, and then document your concerns. If you do that, please ensure you provide a solution too.

I work in user experience and have done work for Disney, the LA Philharmonic, etc. - The experience needs a sophisticated UX/UI to attack how it can make more intuitive sense and still deliver all the features people want and use while holding the line on delivering an overall simple, elegant solution.

Not easy, not achievable as someone else suggest by pulling a kid out of grad school, you need more robust UX horsepower to fix it.

In the near term, fixing the foot size and color, some other things, would buy everyone time to rethink how complex the interface is.

We got a lot of good feedback from this thread, and you’ll see it shortly.

The glass is half full, huh brother?

We purchase 2 types of lyrics data: time-coded lyrics and just the lyrics text. The next bugfix release will address your concern by showing them differently and giving access to the lyrics in the text view if you chose to turn off time-code lyrics option in the “now playing” screen.

Many thanks. May I offer another suggestion?

I don’t want to turn off the time-code lyrics. It is a great improvement.

Brian said that you can determine in real time whether the lyrics are time-coded or static text. Brian indicated that you could address those two scenarios in real time. (Or at least that is how I interpreted his comments.)

Therefore, please simply change the UI so that we only have to click on the lyrics icon in the Now Playing screen a single time. We simply click on lyrics and turn them on and let the music flow, so to speak.

Your UI would then AUTOMATICALLY

(1) show the time coded lyrics when they are available

(2) revert to the text lyrics when they are not available

And switch back and forth automatically and seamlessly. That might be asking a lot, but is that possible?

The glass is half full, huh brother?

UI changes are always tough… but you’ve been around long enough to know we have tougher skin.

that half the time they don’t understand the lyrics either!

Sweet dreams are made of cheese

I think I’m hearing you say something

I do not wish you gone. You are loud and opinionated; I personally like that. However, I do wish you toned down the insults and trolled less (see burger above). It’s just not productive.

I did not mean my original comment to be so harsh, apologies to the team.

I’ve loved Roon, it’s been terrific and greatly enhances the music listening experience. It has taken a step back with this release in terms of UI in my opinion, but does have good additions in terms of functionality.

I hope the screens I shared showed the areas I’ve found most confusing with this release.

Add user-supplied lyrics to your lyrics todo list please. This opens the door for people to hunt down and display lyrics, such as Christmas carols, hymns, and certain period pieces. Maybe translations of foreign-tongued chorals.

Specify a tag name (LYRICS comes to mind) and display the tags contents, if the other two sources come up empty.

Its a feature that would not detract in any meaningful way. Non-interested parties can simply ignore the feature. And even users like me couldn’t screw up a text tag. Or could they?

We read almost every post on these forums, and discuss as much as we can. But one thing we do not pay attention to is volume of requests or polls. The community is a vocal minority of our user base. It started out as a huge % in 2015. It’s now a small %. The community grows every day, but our total subscribers grow even faster.

We also are catering to many more types of music lovers than the original “computer listeners”. For example, a significant % of Roon members are iPad + dedicated Roon Core with no Mac/Windows/Linux involved.

Same thing in other places with the three-line “drag” symbol, like in Roon or Safari bookmark editing.

I would respectfully say you may want to get beta designs into the hands of some the non-audiophile crowd but who might be highly visual persons, i.e. designers, photographers etc and who are also hifi and/or streaming enthusiasts.

As a photographer, I work with visuals and visual programs/equipment all day so ease of UX and eye/brain fatigue is important to me. It does seem as if this horse has been beaten at this point though. I understand that things like color schemes, font choices, etc are burdensome and most are fine with light and dark theme (I’m fine with dark). Perhaps in the future stick to the mono theme but offer a light, medium, and dark?

To me the UI change feels like a first step, not finished. For instance the DSP pages give me a better sense of what the idea is. That design consistency is not visible in the rest of the ipad app.

Are there plans to tie it all together in a later stage?

If you read the thread you will see roon say it is a phase.

There’s a lot to nitpick but still waiting to get used to the chance to criticize it. While that happens, three things spring to mind: 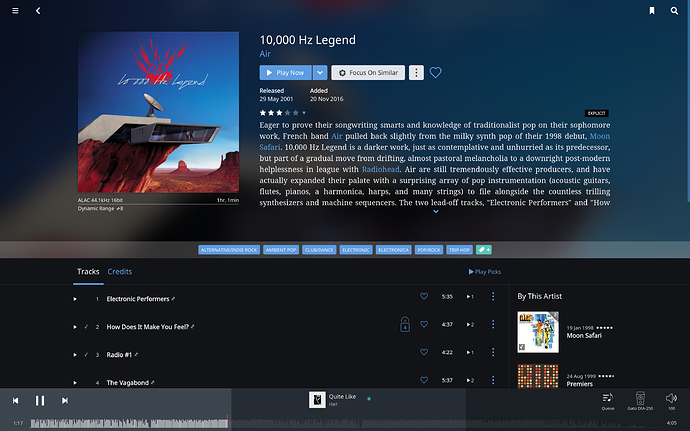 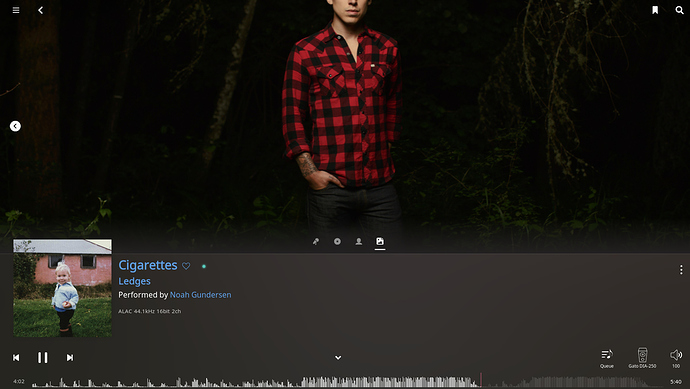 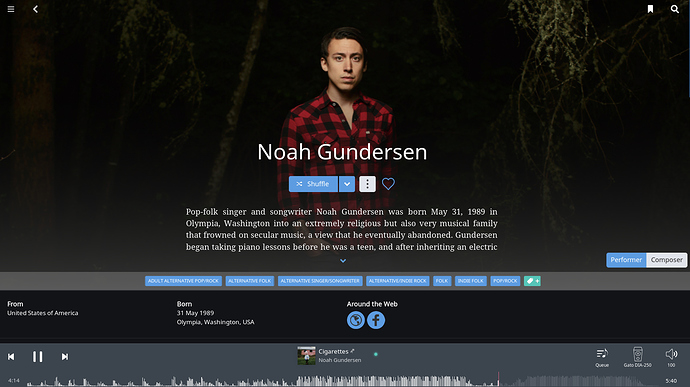 For the more functional changes, I will comment after the change settles in.

A post was merged into an existing topic: Customizable colors [not on roadmap]

I highly encourage people to vote with their dollars. Don’t like Roon? Don’t buy it. Made a mistake buying it? We offer 30 days of refund for any reason.

The proof is in the pudding, so to speak. You told your critics that they can always speak with their dollars, cancel, and get a refund for the remaining month.

I voted with my dollars but in the opposite direction.

In the last 48 hours you have said, quite clearly, that the comments offered by subscribers, including me, will be addressed in a future release within the limits of what is possible for the application.

That is a great record, and I voted with my dollars.

Yesterday I paid for a Lifetime Subscription.

I urge others to do the same. Vote with your dollars, and support Roon.

I do think it is more Windows like. That’s great in my view. I like some control. Apple ‘sensibility’ is for people who don’t understand computers or software. It has it’s place, I suppose, but I prefer the way the Roon UI is headed. That said, there is some clean up to do… like the overview page.

Beauty is in the eye of the beholder; I love the new interface and have found little to complain about. Radio improvement and Qobuz integration are the cat’s meow for me.

Kudos to Roon and the entire team for this release.