I am experiencing many kinds of disconnections always when I want to listen music with Roon. I am trying now to explain the issue, which is not so easy for me.

This happens, when I want to listen to a song, no matter if the content is on the HDD which is connected to Nucleus with USB, or if I want to stream from Tidal or Web Radio:

Besides that, I had additionaly the Tidal-Sync issue, which hopefully has been solved

Playing music which is on the HDD works better than streaming but if you wait long enough, the same issues will happen.

As the issues happens, I can switch to the native Tidal app on the iPhone / iPad / Mac and listen music without interruptions. (iPhone >>> AirPlay >>> Audio Device)

I use Roon since approx 4 months, at the beginning the issues did occur sometimes, it was annoying but not so bad that I wanted to write a support ticket. Now it happens so often, that it is useless to have even the idea to listen music with Roon. After the latest two or three updates it turned worse.

My network is a Fritzbox with Mesh and works fine with other services.

Help would be much appreciated - actually I like Roon very much and want to keep it!

If you install Roon on your iMac that is conneted to the amp, and try playing Tidal, does it have the same issues?

Tidal works always fine on the iMac and as well on the iPhone/Pad via AirPlay to all devices!

A useful data point. But, not a true comparison. They both use different delivery and buffering strategies. That is why I suggested installing Roon on the iMac and seeing if IT had the same Tidal difficulties as the Nucleus.

Maybe I did not understand your question, but it is as follows:

The Roon Remote app is installed on the iMac since the first day and has the same issues.

Right now I want to listen music from Nucleus on my iMac and the Roon Remote app on my iMac always gets interrupted while the Tidal app on the iMac is working fine.

Welcome to the forum!

My network is a Fritzbox with Mesh and works fine with other services.

Is your Fritzbox router up-to-date on the latest firmware? I have seen some older Fritzbox router version have issues with Roon, so I would check this first. Also, please provide some more details on the network setup, including the model of the Fritzbox and the model/manufacturer of any other networking gear you may have.

It does not matter to which endpoint I send the music to - I use Bluesound Powernode, Pro-Ject Stream Box S2 or the iMac (connected to an amp)

If you try to temporarily host the Roon Core on your iMac, do you see the same behavior occur when the iMac is in Core mode?

I have moved the core to my iMac and it works! Since I bought nucleus, this is the first time I had a good user experience.

I have tested the new configuration for about 2 hours without issues. I used the remote app on iPhone and as well from the iMac itself, both worked well and the remote apps synced each other.
(with the core on Nucleus the remote apps never synced, each app stucked at their last playlist)

The router is a Fritzbox 7590 configured as Mesh-Master with other gear from Fritzbox, everything is (and always was) up to date. Streaming 4k movies and Tidal always works well, no matter to which part of the gear the endpoints are connected to. Here are some screenshots of the network: 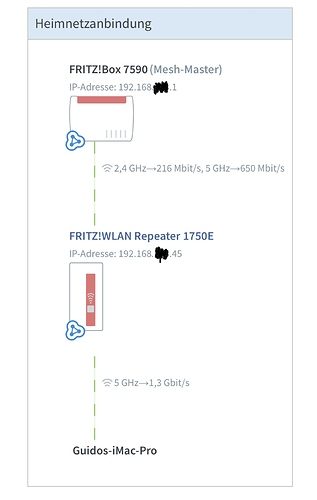 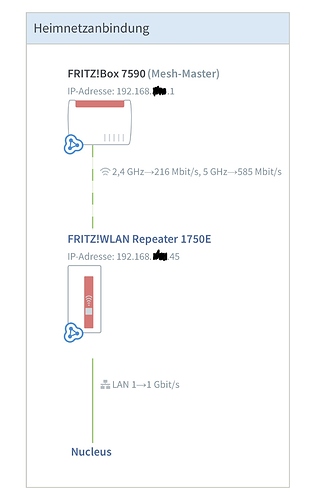 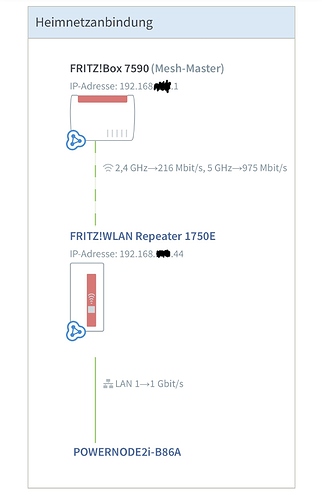 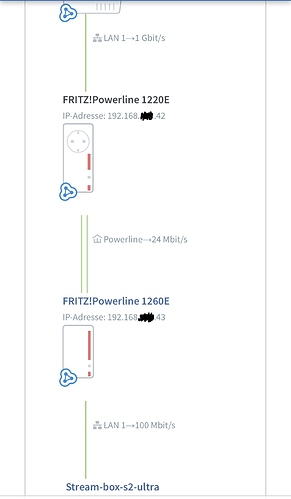 As far as I can see, there are no obvious problems with the WLAN network itself. The connections are stable.

So are these good news for my nucleus hardware or bad? Actually I would prefer to have the core on nucleus because I spent a lot of money and at least I don’t want to run the iMac 24h.

Can we fix it please?

Thanks for checking the iMac for similar behavior, this confirms that the Nucleus is solely affected by this issue, so we are in a better position to address it now.

I should mention that sometimes we have seen problematic behavior from WiFi Repeaters/Powerline adapters, and as such we don’t suggest using these kinds of devices with Roon (as mentioned in our Networking Best Practices Guide). It’s too early to say if this is the definite cause of the issue just yet, but we can troubleshoot in this direction as well.

I propose the following tests to troubleshoot the Nucleus further:

I did the OS Reinstall and after some days of testing I am happy to say that my Roon system works better now than it did out of the box. No Roon-related disconnections happened!

Of course, the device which is connected by Powerline sometimes loses the connection to the entire network but it does always reconnected itself now. I can handle this, it is still better than WLAN in the same room. Besides that, my Mesh network provides a very good internet for all other non-Roon devices in the house, which has more than one floor. The connection statistics are pretty good. It should be possible to run Roon with a network on a better or maybe high end “consumer” level. If one need an enterprise grade network to use Roon at home it would be a downside.

I hope, my problems with Roon have been a “one time event”. Sometimes issues come back after a while. So it would be interesting for me to know how comes, that my Nucleus had such a bad performance out of the box?

I assumed that Nucleus is a plug and play device. Did I overlook an instruction to make the OS Install from scratch?

Roon is really great, when it works!

Glad to hear that performing the OS reinstall has helped with this issue!

Yes, typically the Nucleus is plug-and-play, but if there was an issue with the OS, the reinstall you performed should have sorted this out.

Do let me know if there are further issues here and we can certainly take another look if so, thanks!