I’ve been hearing a zing/boing/buzz kind of sound on loud bass notes, in particular kicks in electronic music. Initially I thought it was a loose wire inside the speaker, or a damaged tweeter, but after testing on several amps, speakers and monitors the distortion seems to be in the output from Roon. The distortion is heard when playing from mp3 files and Tidal through Roon.

Playing the same mp3 files through musicbee does not reproduce the problem. Playing from Roon through a USB soundcard gives the same issue. Both audio and optical output from my usual sound card (ASUS Essence) have the problem. Strangely the distortion is not audible when streaming from Roon to Chromecast audio through wifi.

I’ve been using Roon since March this year and not noticed the issue until around the start of July, although it may have been there before that.

Any help would be appreciated!
Cheers,
Andy

Can you please share a screenshot of your Signal Path when you play a track with this behavior?

Also do you have any dsp settings applied? 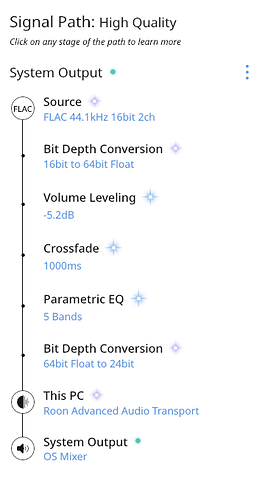 To be honest I didn’t realise there was that much going on. I might try to weed a few things out.

I just turned DSP off and it’s still happening.

It’s not the volume leveling or crossfade either.
My signal path now looks like this, with the issue still present: 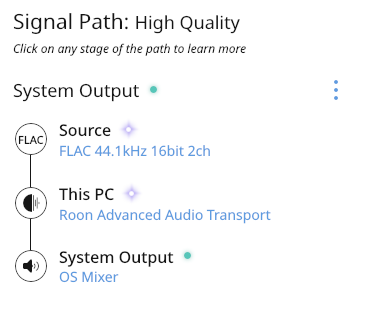 Is your connection to a DAC?
If so, have you tried setting Exclusive Mode in the device setup?

So perhaps a setting (sound optimization) / EQ on the OS.

That’s only using soundcard so the OS could be doing anything to the signal hence why it’s green and not lossles. If connecting the Focusrite it should show up in settings/audio as a device connected to the pc you should enable it and use that zone. If using WASAPI ensure exclusive mode is on in Device settings to bypass any OS interruptions.

The last screenshot was when playing through the ASUS Essence audio out, so no external DAC. There isn’t an option for exclusive mode using this device (“System Output”). 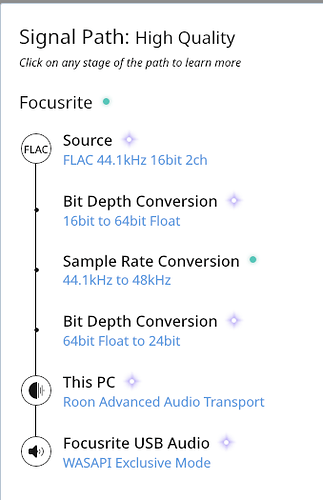 I’m not sure why there are so many conversions. Seems like it may be a lead to understanding the problem.

So what I want to get working now is ‘System Output’ through the Asus Essence.That’s the one I use for general listening. 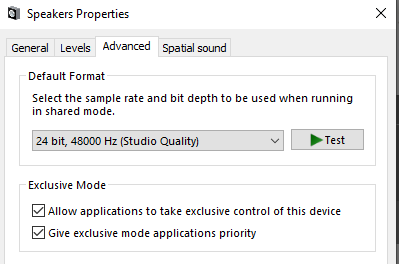 I guess I’m maybe at risk of losing out on audio quality for anything recorded over 44.1kHz but that’s a different discussion!

This is the trouble with computers . If you had it at 48 before the OS is resampling everything to that behind the scenes and is likely not good at it. Now you will get everything downampled to 44.1 Your best to use a DAC on a pc and set it to exclusive mode, Roon will send audio without any interferance from the OS, switch sample rates if the dac supports them and likely sound better.

Looking at the Focusrite it doesn’t switch rates, it’s set by the audio control panel in Windows. So in your example it’s telling Roon it only supports 48/24 so Roon is resampling for compatability reasons.

In general terms, what you are seeing are your various sound cards controlling Roon’s signal path. Unless you are really mixing music or sounds, it’s best to just send a bit perfect signal on to the sound endpoint, which presumably is a DAC.
Now if you WANT to run some specific digital signal processing, then you can control that more specifically in Roon.

I had a look around and found a separate audio device in the list for the Asus card which allows exclusive mode. 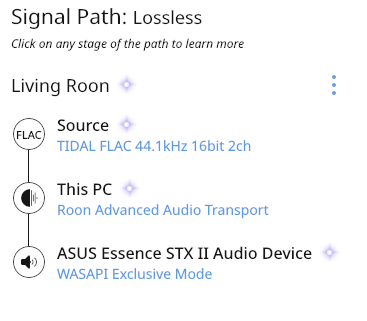