Do you play an instrument?

I once commented to a percussionist with the ______ orchestra that “at least you do not have to learn chords.” He corrected me and referred to the vibraphone. 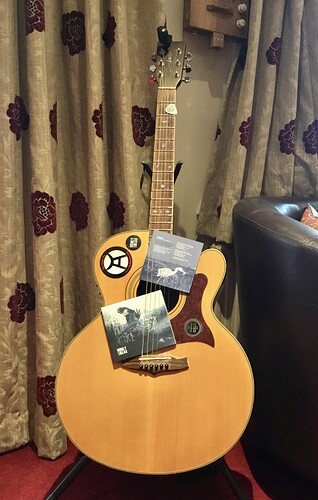 My TANGLEWOOD Guitar I bought for not much in a Charity Shop. Roy Gandy of Rega Fame, set it up for me adding a zero fret too. He has done a fine job as it has a beautiful action and stays in tune along the neck. He does like fettling. That was a bottle of wine well spent. It was great sitting in his kitchen as he praised its virtues against his Larrivee guitar.

How did you learn to play guitar? Did you once take lessons or did you just start because you did like it?

My daughter has a dog like Jim_F. That breed can really howl. They love it. It always startles me. That said, what a great breed (Miniature Schnauzer) it is. Well, subject matter of another thread. Can really make one nostalgic.

Oh, here is another burglary temptation. 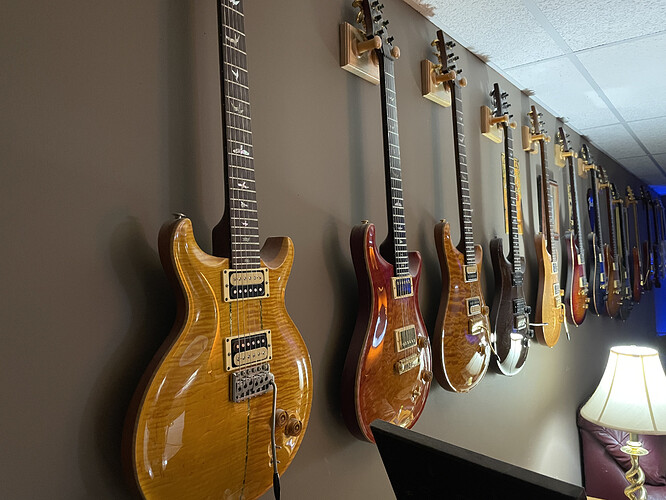 For me playing an instrument is not that I want to be able to do it in perfection. But it is a perfect break. And you have to concentrate 100% onto something else. When I have the sax in my hands, I cannot think how to improve a program at the same time. If I just listen to music, watch a movie, I keep thinking about some other things.

You can never have too many guitars… you can have to many shirts and underpants, but not guitars

I help my son composing music for his computer games. Using FL Studio and this keyboard.

Play a bit of guitar and keys (took a couple of years of piano lessons as a kid). Was a sound engineer at my alma mater - helped more talented others to play/record their music… 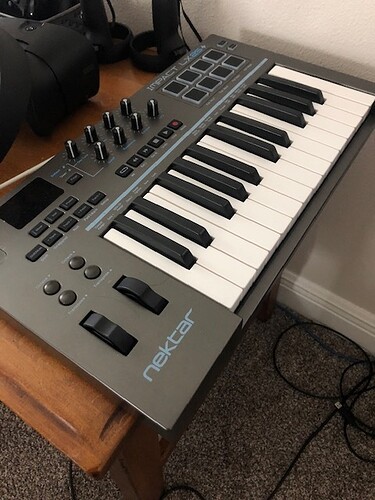 Woaaa. Do you collect guitars? Are you in the music business? Normally it looks like this in a guitar shop!

When you listen to audio, chose gear, does the fact you play music - or even compose music - influence you in the choice of the components?

To a degree. I think the “engineering, scientific” background of mine dominates my approach to gear selection. But I definitely do not dismiss the “listening” aspect either, and life-long training and being around music creation helps to zoom on ups/downs of the sound quality pretty quickly.

Or…you can go commando and afford extra sets of strings

No, I am not a dealer (nor collector per se) I do see instruments as art. And likely the excess is illustration of poor impulse control. And as my youngest used to say: “shiny.” I have a few others elsewhere in the home. But I no longer purchase additional ones.

Yes, I agree. I realised years ago that much as I love music I don’t have the talent and/or dedication to become as good a player as I would like. Even so, I enjoy the discipline of practising, seeing some progress in my playing, and so being able to play more challenging and interesting pieces. Like you, I find it impossible to think about work (embedded software) while I’m playing so it’s a really good way to “switch off” from the day job.

My high school band director was a professional drummer in the Charlotte, NC area. I learned a lot I would not have otherwise. I filled in for him when he was dying from Hodgkin’s Lymphoma and I was only 16. It was mostly jazz, but some big band stuff.

You have had a rich life. Sad about the band director.

I was in “band” in high school, played clarinet (was 2nd chair) because I saw the Bennie Goodman Story. I took private lessons as well as school based lessons.

Band director was a nice guy. One of my classmates was the brother of a main character in West Side Story. The classmate’s name was Terry.

One day, frustrated with Terry’s horrible playing (trombone) the band director "said for ____sake, Terry, look at the music…what comes after “G”?

My wife came into my office one morning and said “if you could have any currently made guitar, what would it be?”

I rattled off what brand, model, pickups, color etc…very extensive since it was seemingly just a playful interchange. Three weeks later that guitar arrived. She had it custom built.

She is an enabler. I dare not mention a stereo component or even a preferred opioid. (joking).

Guitar since my youth (10 or 11), fairly seriously in high school and college (late 1960s-70s), but then I pursued an academic career, which sidelined my playing. Now, regrettably, my guitars (a 1970 Martin D-35 and a 1935 National Steel), sit mostly unplayed. In my 40s, inspired by Bach’s Cello Suites (and a definite change in musical tastes), I took up the cello, but career moves and raising a family eventually relegated the cello to the closet. Resumption of the cello is tops on my list of retirement goals, though my wife, properly so, asks. “Why can’t you start again now?”.

A lot of times, we cannot get back to an instrument because it takes a focus we are applying elsewhere. A D-35 and a National Steel are great.

Although this discussion will be brief, to me it is more interesting to know what brings people to music. A corollary question is "how much of your day or night is your home (and/or office) not playing music. Ours is never, ever.

I was raised in a family in which music played a big role in daily life. My mother played guitar (a 1953 Martin 00-17, which she still has, and she’s now 91!), and my parents had, for many years, a season subscription to the Metropolitan Opera, performances broadcast each weekend on the radio at home. Naturally, in my teenage years, I hated classical music, but, eventually, my musical evolution shifted to classical and jazz (according to Roon, 83% of my Library falls into those two genres), much to my mother’s delight!

My wife is a big music fan as well, and in normal times, we see as much live music as we can. Now (especially in the COVID era), in our home, music is an integral part of our habitat, which revolves around a great multi-room audio system built around Roon.