DoP limitations on a Pi

However when using the Pi and DoP I’m limited to only DSD 128. Anything above that procedures no sound at all, and the Teac does show receipt of anything.

I was recently wondering about something very similar to @ian_frost’s question and this answer is very helpful!

Thanks for the confirmation. To access the higher rates then, I’d either need a native Linux driver for the Teac or use a Win based End point ? Or accept the fact I won’t be be able to play my vast collection of 10 DSD 256 and 512 tracks.

At least ROON is able to transcode down.

That would probably apply to any unix based end point then

This contradicts my limited experience with a similar device, and this post:

From the manual: To play 11.2MHz DSD recordings with TEAC HR Audio Player, open the Configure window and set the “Decode mode” to “DSD Native.” To play formats other than 11.2MHz DSD, you can set this to either “DSD over PCM” or “DSD Native” as you like. Native DSD requires an ASIO driver – which are rare for macOS/OSX (I believe Exasound has one). By default it does DoP only – limiting your DAC to DSD128. I suspect that the TEAC HR app uses some special trickery that works in-app only. Un…

If possible, please retest DoP256 using a PC and let me know the result. Thank you.

Anybody able to play native DSD512 on a PI ?
Thank you

However, I do remember that I could play up to DSD256 using another Pi distro, which did allow native DSD for TEAC. I’d have to check which one and whether my memory is correct.

I read somewhere that there is a patch which would allow the TEAC to accept native dsd.

The Ropieee distro allows native DSD for my TEAC UD-503, up to DSD256.

No DSD512. Roon is sending DSD512 to the RPi, but no sound. Perhaps because I’m only getting 0.9 processing speed? Strange, because the iFi iDSD processing speed for redbook->DSD512 is 1.8.

EDIT: I accidentally switched of parallelized processing. Now turned on and processing speed 1.5. Still no sound on DSD512… 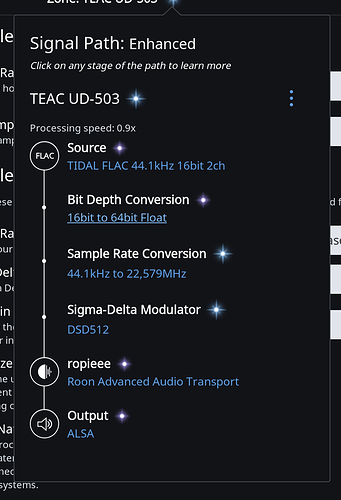 Im curious about how well the RPi3 will perform with DSD256. I have tried it and get pops, clicks, and dropouts. I never figured out why, but thought i would ask to see if anyone else knows about this issue.

DSD64 seems to work just fine, but DSD256 never did. I assumed it had to do with the USB port sucking up too much power when streaming such a large amount of data that the Pi just couldn’t keep up and would crap out.

Im curious about how well the RPi3 will perform with DSD256. I have tried it and get pops, clicks, and dropouts. I never figured out why, but thought i would ask to see if anyone else knows about this issue.

Experienced the same thing myself and started a thread about it:

Don’t know. If you can’t hear them then you are luckier than me. I’ve moved on from the RPi3 for the iDAC2 setup - the C2 is way better (to my ears) I still will use RPi3’s for dad’s <192k music setups, no issues with that of course. I probably could have left the old fella with the iDAC2 and Moode and with his music he wouldn’t have noticed a thing… but I just couldn’t do that to him lol. It would be buggin me even though I’m 40km’s away.

What DAC are you using and which OS?

Try playing back a test file DSD512 directly. You can download here:

If it can playback with a test tone, your DAC can support DSD512 natively.

I had all sorts of issues when I started off with my Teac 503. Using a native dos driver and JRiver all was well, but it wasn’t until I used the Ropieee build within Roon with a Pi that I was able to get over the DOP problem in Roon.

Sean, who wrote Ropieee wrote a native driver for the Teac.

Let me correct that. I did not write a native driver, I only built a custom kernel that supports the Teac wrt native DSD.

Now on the topic itself: DSD (whether it’s native or DoP) requires an extensive bandwidth. Doing that on a Raspberry Pi you can run into issues due to the design of the Pi that has a shared bus for both ethernet and USB.