Raspberry Pi 4b with Allo BOSS DAC connected to router via ethernet & to analogue amp via standard phono.

Since the last update today, I’ve seen a glitch where an album cover gets duplicated in the wrong place. It’s happened twice.

Not a huge deal but I thought I’d flag it.

I was suddenly seeing this:

After a restart in shows correctly.

This has not happened before but there was an upgrade today & it’s happened twice since.

Sorry for the delay in getting to this report. Have these incorrect album art displays persisted or have they cleared up since your report? If you’re still having this problem please clear your image and let us know if that helps. You can clear the image cache by going to Settings>Setup>clear image cache. Thanks!

It happened twice & a restart cleared it both times. It hasn’t happened again for a while, mate.

I remember that it actually happened three times.

The first time was the most severe. I launched Roon & this Popol Vuh cover…

Was being used for every blank cover, so all of these showed that same cover: 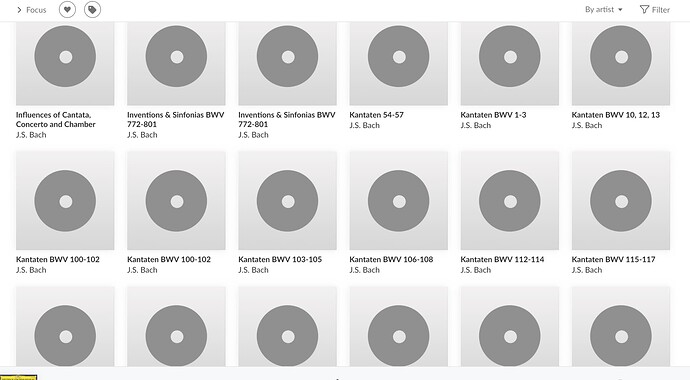 I’m often doing a lot of editing, then clearing the caches & restarting. Very often, I’ll get two duplicate album sleeves when I’m editing. If I click on one, it just says “this album does not exist” whilst the other one appears normal. Sometimes, if I carry on editing, Roon will “clear” its memory somehow & the duplicate sleeve will disappear. Other times it will persist & I’ll have to restart to get rid.

In any case, the fact that none of these problems have persisted meant that I’ve just put it down to Roon’s foibles & it’s caused me no particular concern.

Thanks for the update, let me know if it persists and we’ll take another whack at it!