Earlier I had no issues running Chromecasts in “Display” mode for Roon, however as of today I see this anomaly when accessing the “Display” section of the settings, many duplicates of Chromecast devices… And although I have multiple Chromecasts on my home network, I can only see one of them listed in all these duplicates. 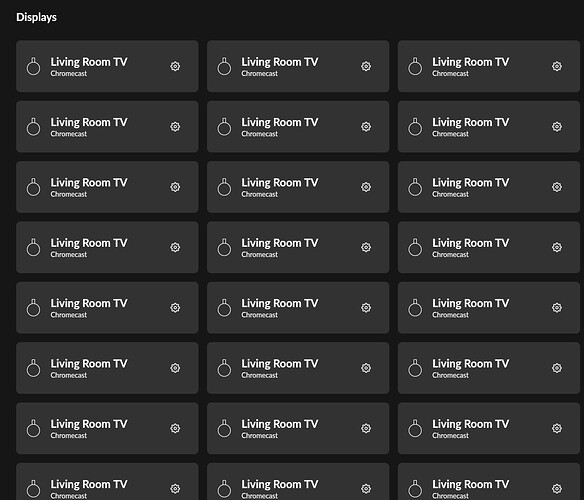 Thanks for reporting this! We’re sorry about the “abundant” devices displayed in Settings → Audio. Normally, Roon will display in this area all devices exposed to the network.

I wonder, could you please reboot your Core? Quit Roon, turn off the device, unplug it for a few minutes. Then, plug it back in, turn it on and launch Roon. Are the devices still duplicated?

I tried, when I first reboot the ROCK device (NUC) I can only see 2 Chromecast devices listed correctly, then a few minutes later one of these starts duplicating until I have countless instances of the same one…

I can see similar issues reported by a number of folks on this forum, none of them seem to have been resolved…

Maybe this device is “hopping” between different access points or bands (2.4/5 GHz), sending a new service announcement after each successful connect. Try and see if you can troubleshoot in that direction. Maybe you can track the access points the ChromeCast connects to or something like that on your ASUS WiFi gear.

While 2 of my 3 ChromeCast are wired too, none of those is “wireless” as they are connected to WiFi bridges. I’m also pretty sure to never have seen settings in their configuration to enable wired network or disable WiFi - they are pretty much auto-configuring them self and thus may fall-back to use WiFi if something is wrong / not working on the USB to Ethernet adapter. As Rebeka wrote, Roon is just showing the ChromeCasts advertised on your network. The advertising is done by the ChromeCasts. So it looks like something is wrong with your ChromeCast specifically or your network. Have a read trough this older thread to get some ideas how you possibly can further troubleshoot your issue:

From a Windows command line one could use dns-sd -B _googlecast._tcp to browse for announced GoogleCast services (hit control + c to stop browsing). Is there anything unusual/unexpected in the listed announcements? Do they change over time? Note: Maybe this issue is network related (devices hopping WiFi networks {2.4 – 5.0) or access points or access points hopping channels), leading to multiple concurrent or duplicate entries over time for the same device? I also use different ChromeCast devic…

Yeah, I read that thread entirely, I am not sure where to find the DNS Reflector setting on the ROCK, unless this is something in the bios but I doubt it…

Also my Chromecast devices are the new Chromecast with Google TV model and they have a network setting menu from where you can choose between wired and WiFi, I disabled Wifi on the device to ensure it was not messing with things.

I also could never get the “dns-sd -B _googlecast._tcp” command to run in my system… I am running Windows 10 but when I try to run this command from the command prompt I get:

“‘dns-sd’ is not recognized as an internal or external command,
operable program or batch file.”

Such a setting doesn’t exist. If you have such a software, it runs somewhere else (router, firewall, ?NAS?).

All of them or just the one with issues (duplicate entries)? If you have more than one, you can probably swap them around – see if the issue wanders to another zone with the device (bad device) or affects only devices in that exact spot (bad network behavior).

So it is missing. Sadly I don’t know how to get it. It works on my Windows 7 and it worked on the other users PC. Maybe we have/had Apple products installed that came with it?

Well, I might have gotten somewhere with this puzzle after a few days of banging my head against the wall…

In my setup I used one of Google’s power adapters that include a built-in Ethernet port… The benefit of this approach for me was not having to rely on unstable Wi-Fi for Chromecast functions, and instead having that ethernet port connected directly to my access point via ethernet cable provided a much faster and more stable internet connectivity to Chromecast…

When I removed that Ethernet cable and had Chromecast connected only via Wi-Fi, the problem disappeared.

So a faulty Ethernet cable possibly? Glad you found and resolved your issue.

I tested two other cables with the same power brick, and it was the same, duplications… when I tested the Wi-Fi only option the problem went away… It maybe an issue with the power brick.

@thijazi This should be fixed in today’s update! Let us know if your Chromecasts are still being duplicated.

Hi everyone, The team has been hard at work, not just improving Roon but also refining how (and when) we deliver performance improvements and bug fixes to Roon users! With lots of exciting new features and functionality in the pipeline, we’re also planning to ship bug fixes and other enhancements in smaller releases once or twice a month. For this week’s release we have a number of improvements going live driven by feedback from the Community. We’ve been paying close attention to comments rega…