(screenshot from TIDAL’s app to reinforce that it’s not Roon!)

I like Jay-Z because my daughter works for a company in which he’s one of the major investors.

David, I meant that this only appears to be a US thing. UK is relatively “normal”

Oh, in that case, you should pity us.

To Mr -Z’s credit, he doesn’t seem to be flooding the Tidal Recommended albums (which doesn’t really make any difference to me, since I usually have to hit the Tidal Genres to find anything new I might be interested in).

Last few times I checked they were relentlessly trying to force Beyoncé (and similar) on me. Thankfully the iOS app has finally had a redesign to take away the aggressive Tidal bias.

Funnily enough, I almost put together a mockup today of a 2027 TIDAL Recommended albums, with LEMONADE still top left

I’m probably one of the more ardent hip-hop fans on these boards but yeah, that is a bit much! I mean I like Jay-Z but I don’t like like him. And just the other day I was thinking aw c’mon, Tidal isn’t that bad… look a Sun Ra playlist.

Once a week or so I do look at new releases in the proper Tidal view, the rest of the time I happily rely on Roon searches & reviews, or what people are chattering about on various forums.

LOL Yep it’s a collaboration but definitely his style. Only had one listen. Like all his stuff need to listen again for all the quirks and nuance.

When a guy is the first rapper inducted into the song writer’s hall of fame and he owns the streaming service, I guess he gets to list his albums wherever he wants :~)

I think “owns the streaming service” is sufficient.

I subscribe to Tidal Brasil, Not only does it not look like this, I pay less than half the cost for premium as in the U.S. Double bonus, lol.

If I owned Tidal the “Recommended” would be full of trucking songs and prog rock, so count yourselves lucky. 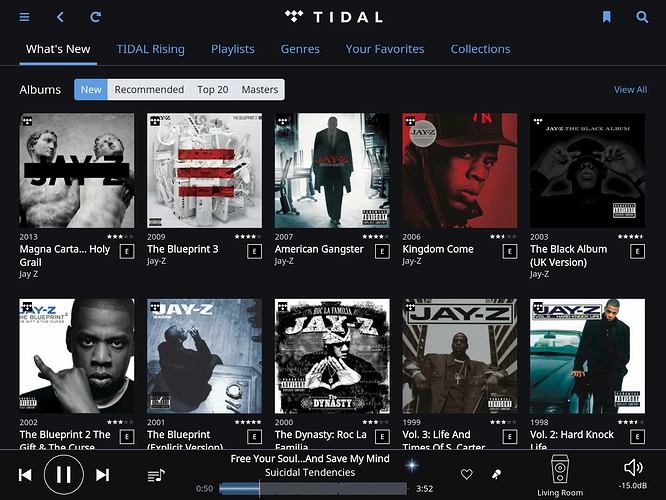 I’m a Jay-Z fan but even for me, that is ridiculous now.

A lot of people I know are turned off from Tidal just by the front page with too much Hip-Hop (and I’m a fan), even though the library is pretty good beyond the front page.

I don’t think an entire front page of Jay-Z would help to bring those people back to Tidal lol.