Does anybody tested the EtherREGEN sound quality versus direct network cable (from Roon ROCK to DAC, with no router or switch)?

Rajiv Arora, who goes by the handle austinpop on AudiophileStyle and (I think) @austinpop on this community forum, did a lengthy review of the etherREGEN, which you can find here. He found a significant positive difference in going from an Ethernet cable from router to DAC vs. using an etherREGEN. See excerpt below.

Even in the “no switch” configuration, the system sounded great, with satisfyingly deep bass in the opening notes, and great air and dynamics on the triumphal trumpet theme. But with the full monty configuration, there was just so much more! The image size was now huge, and the bass was deeper and fuller. On the drum beats, you could effortlessly distinguish the different percussion instruments collectively being struck. Perhaps because my system is much more resolving, and because I was using an even better PSU and cables, this difference between no-switch and full-monty was much greater on my system than it had been on M’s system.

Arguably one of the best upgrades in my setup was ER. I have been using it for 6 months now… love It.

There are few significant upgrades I did to my setup based on all the wonderful research done painstakingly by folks on this forum:

All these in their own way upped the SQ one step at a time.

I would request you to consider these options to get the fullest out of the DS.

Where do you use the Ether Regen in the chain relative to the optical Rendu?

I supplemented my etherREGEN with a Sonore opticalModule. This fiber addition gave me additional SQ in my system. I added the fiber connection based on the review by Rajiv Arora in AudiophileStyle.

I assume you have ethernet->ER->ethernet->oM->optical?

I have used an ER for many months and in my system it makes a significant difference, I also have an unused oM lying around and was thinking of trying it instead of the ER but never thought of daisy-chaining them.

In addition to discussion on AudiophileStyle, check out the Naim Audio boards for many different impressions about, and configurations for, the Uptone etherREGEN.

My own superstitions now have me sending optical from my router to a cheap, used Cisco Catalyst 2960 switch ahead of the ER for best results. Your Mileage May Have Nothing At All To Do With What These Deluded Expectation-Addled Folks Are Saying…

I updated my initial question: by “direct network cable” i was reffering to a direct cable between Roon ROCK and DAC, with no router or switch.

I have two Roon network endpoints, either an Allo DigiOne or a Meridian 218, between ROCK and DAC. When I add the Cisco Catalyst (first) and etherREGEN (second) just before the endpoint (last), ahead of the DAC, I get the tightest, most open, revealing and realistic music from my Meridian active speakers.

Could just be Fake News Far-Left Fascism though…

I have tested etherRegen, in my system it gave a smoother and more fluid sound with blacker background. But since I only need one ethernet port for HiFi, and already have a switch with fiber out, I instead bought an opticalModule connected with fiber to the switch, and short ethernet cable to streamer.

I updated my initial question: by “direct network cable” i was reffering to a direct cable between Roon ROCK and DAC, with no router or switch.

You can’t actually do that can you? 99% of streamer DACs need visibility of the internet. I’m not of aware of any that don’t. ROCK doesn’t allow a second port to be discoverable. I had a feature request that had some interest but the curator of the most popular feature request thread chose to exclude it. It would add a great connectivity option for RoonOS (both ROCK and Nucleus) in my opinion.
For the record, my eventual solution was the ER.

This setup was ratified by Alex Capri over my email exchanges.

My question was to @Flashman and his set up - I do understand how you have yours (I have many of the same components). 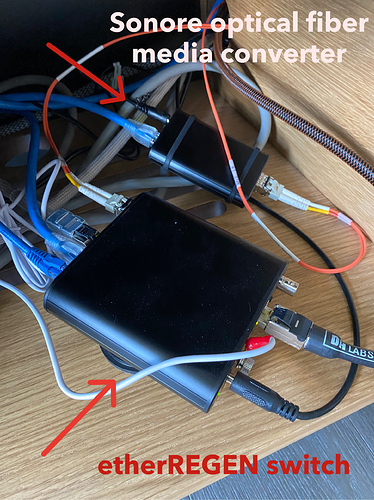 @nycenglish In the photo, the DH Labs Ethernet cable on the B side goes to my Devialet Expert 220 Pro; my Roon Nucleus via Ethernet is on the A side.

That isn’t a typical setup though. And my request would allow any streamer to work in a regular network, no split subnets. With wireless access of administration pages of those streamers and the ability to do updates without having to unplug or reconfigure anything.

I would save your money.

This is a review and detailed measurement of UpTone Audio's Ethernet "audiophile" switch. It is on kind loan from a member. The EtherRegen costs US $640. The EtherRegen as the name indicates, "regenerates" and Ethernet signal. This is a...