Connected via ethernet to LTE Router using 4G mobile connection (I am in a country house with no access to a landline).

The Roon Core seems to consume a huge amount of internet data with no particular activity. Today I listened to music for a couple of hours and left the core on for 10 hours, and it downloaded 8.8 GB. No other machine was on the same internet connection during this time (I have a separate satellite connection for all other uses).

No database update or additions to the music library happened during this time. No streaming.

This is an issue as excessive data usage can lead the ISP to throttle the connection or potentially even cancel the account.

I have two questions:

Many thanks for your help.

I thought by now some more experienced Roon experts would have offered potential answers to your questions.

My first thought was that an automatic Windows Update (or series of updates) downloaded during that time. Or that other programs/apps such as Google Drive, Dropbox, etc were downloading files to mirror what had been uploaded to the cloud on another machine on the same account.

Finally, I’ve had some connection surprises in my shared home with Hotspot/WiFi routers that I’ve used in the past but don’t use regularly. My phones and tablets will connect to them even though I left the phones/tablets last connected to the preferred router. I’ve had to manually set the WiFi connection on these devices to NOT “Auto-Join” the router I don’t wish to use. You may want to check those devices and ensure they aren’t connecting.

But I may be missing something and hope an expert will chime in.

Roon populates it’s database with updated metadata on a regular basis. This is downloaded from Roon servers obviously, and the amount of data will be dependent on the size of your Roon library. If you have a new database or have imported a large number of new albums into your library then there could be a big dataset downloaded.

Thanks for your thoughts. I had a look at the data usage panel on the machine running Roon core, this is what I see after a total of about 12/13 hours of running time. As you can see, Roon used 14Gb. Once again, no streaming or additions to the database. A total of 4/5 hours of playing time.

Windows also uses quite a bit of data by the way. At some stage I will have to convert the Nut to a Roon Rock machine… 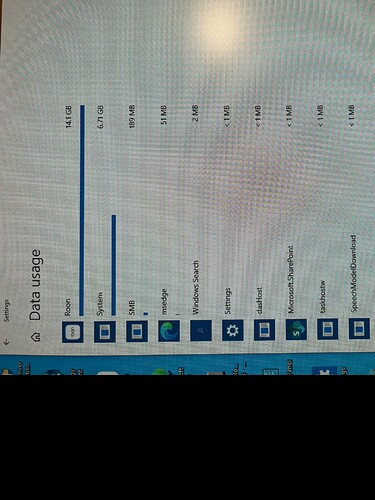 That 14Gb could include local data no?

Thanks for your message. In this particular case I am observing a day or so of activity several days after the last addition of music. As far as I can surmise, the data download consequent to the last addition should have been over and done with. The data usage I see seems to correspond to some sort of routine activity. By my standards, and in my particular situation, it’s just too high, and will likely have consequences.

Hoping to get some insight into this

I assume it is the data transfer on the internet connection, the graph is from the Windows network settings on the Roon core machine. Note the music is streamed from a NAS to a renderer endpoint (Ultrarendu) connected to my DAC. I thought Windows wouldn’t see intra-network data transfer, but I may be wrong, in which case “egg on face”…

I think that figure includes local traffic but I may be wrong as it is hard to tell from your screenshot. If it does then obviously the 4/5 hours of playback would incur significant local traffic.

Clearly, and I hope that’s the case (although I will feel a bit dumb for not having thought of this…)

I’ll monitor internet consumption on the router side for a few hours and confirm.

Looks like it is internal network traffic. The router indicates much lower traffic in the last 5 hours (less than 0.2 GB

Thanks Tim for the good thinking

I will modify the thread title