Anyone seen this problem.

Essentially, using the filters/focus tab doesn’t work when trying to sort by an album being present or not present. See screenshots below. 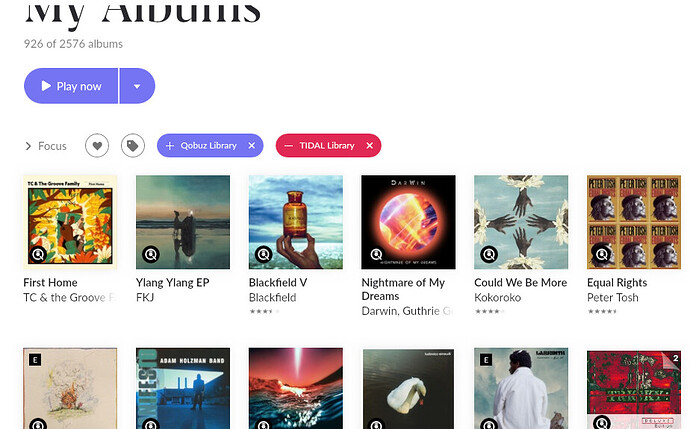 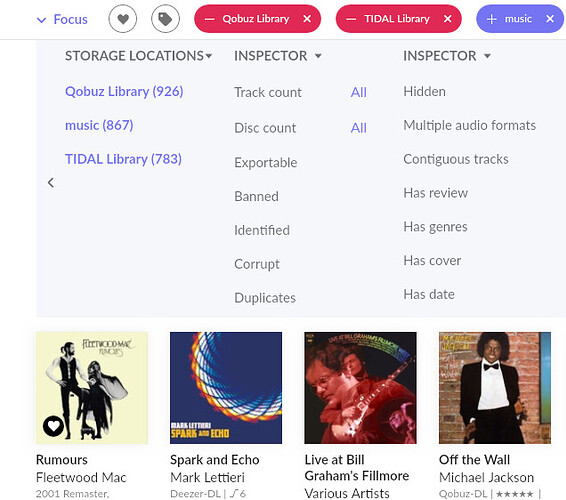 To me, I understand the “Logic” but its not clear. In general, if you focus on NOT TIDAL but INCLUDE QOBUZ - Logic would be better applied to show you all the QOBUZ albums in your library that don’t exist in tidal rather than currently only show the albums in qobuz and ignore if it exists in tidal or not

Instead it seems to just apply the single filter of ‘If its in QOBUZ’.

How could the FOCUS be used to basically find Albums that Exist in 1 streaming service and not another or vice versa so I can cleanup my collection. Third party tools are not the answer, that’s another can of worms. When you add a single TRACK in tidal for example, it shows as an album. And external products like soundizz to sync streaming services will simply match the entire album, polluting your entire roon library with thousands of tracks from full albums in Qobuz when you only added the single track in tidal.

Any suggestions? I want to just clean up my music in Roon only and not ever use syncing services again.

It appears you have turned the focus selection for Tidal into the - Mode, which excludes Tidal Selections.

If you click it again, it will turn Blue again and will show your tidal albums.

But I would like to be able to show albums in ROON that are In Qobuz but are NOT in tidal or vice versa. Any idea how I can filter that?

Same with Local vs in a streaming service to compare/cleanup.

Would be very very handy.

I do this by creating a tag called “No Matches” and tag all albums I add that are only in one or the other service, but not both. I use another tag for “Local” albums. About once a week, I click on each of these albums, then look for Versions, to see if the other service has added it yet. 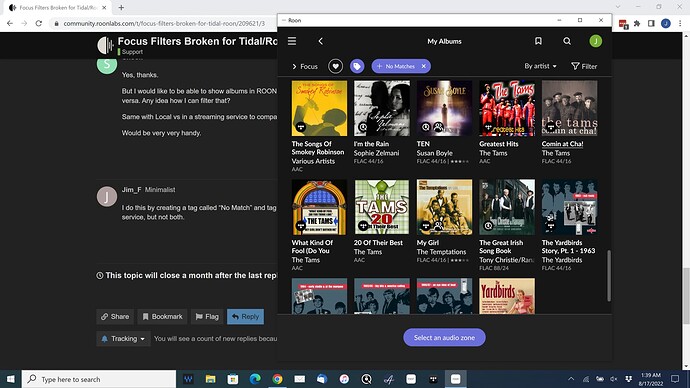 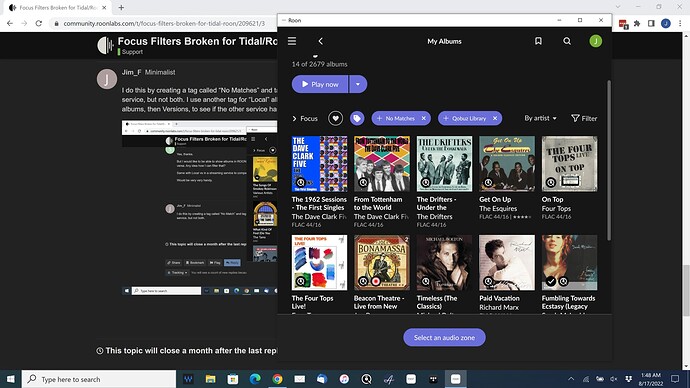 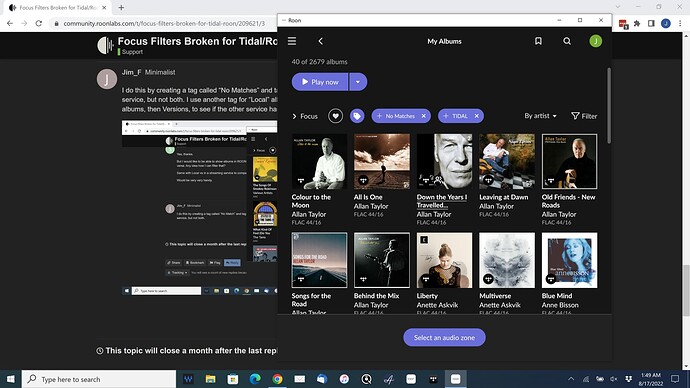 In Albums, sort by Artist over to the top right (rather than using focus). It will show you every album in your collection by artist and where it resides. If you have local, Qobuz and a tidal copy they will all show.

That way you can see what you have and what service it is on.

For example this shows I have Air on Local (shows me dynamic range) and Tidal. 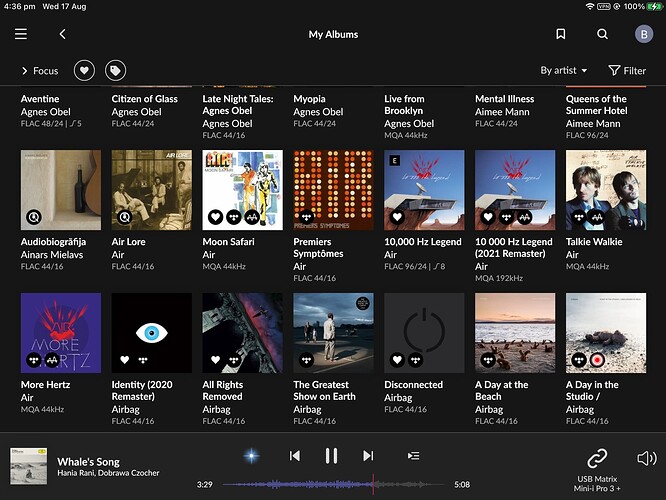 Appreciate the reply but I don’t think this is a feasable way. Browsing through and doing manual filtering with my brain is exactly what I am trying to avoid. I want to tick a few focus boxes and create a filter stack that shows me only what I want.

Kind of how a firewall is configured in the IT world, you have allow/deny rules and can filter down perfectly.

Being able to filter down and then select all and delete is the goal.

Nice and easy to clean up then. I believe this is how focus should work or add some options to build a query or something to get specific.

Interesting, but this relies on a previous workflow throughout your entire libraries existence. This isn’t going to work for me.

I think you understand the problem well though. And obviously noticed Roon does not have a good way to filter/focus out exactly as desired so you have tried to create your own system via tagging from the beginning.

I only recently ended up with two streaming services, so never had a problem before.

I gave you a solution that works now. If you don’t want to use that, you should enter a feature request. This is not a bug that Roon Support can fix, it’s how Roon works. Tags exist for situations such as this.

I tried using tags, but it still seems to totally remove all items from available view when removing tidal or qobuz from the filter (even with a tag applied to every album in my library as ‘All Albums’ to try overrule that and do some sorting). Ill have to play more and report back here with what I find, I am sure others are trying to do something similar now that its so easy to have multiple streaming providers for more content coverage.