Is there a font error in the Roon app on the iPad Pro 10.5 - it looks like the letters are being cut off at the top?

Hi are you able to post a screen shot to demonstrate?

Sure. Look at the “s” in Discover 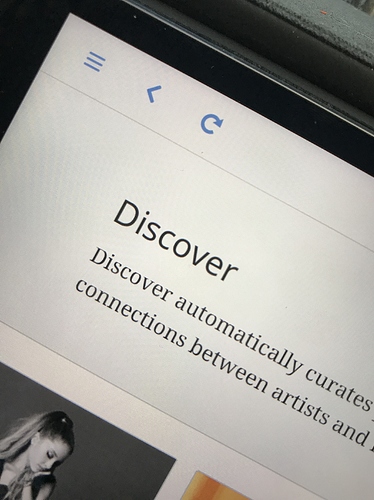 Yep I can see that and on the other chars as well.

I can confirm the same anomaly on my iPad 10.5…

It’s a known issue. We are looking into a fix – but its not happening on many devices, which is causing us headaches.

I can confirm it’s happening on 12.9" iPad Pro gen 1 as well. It seems to be happening on every device since this gen 1 device. Clearly a change in the GPU.

Been like that on my iPad Air for a fair while… not sure what gen it is. (It’s an MGLW2B/A, apparently).

Do you know if iPad Pro font issue is fixed in IOS 11?

Updated my iPad Pro 10.5” to IOS 11.1.2 and Roon Remote 1.3.274 and problem still exists. Question to @support – is there any hope for fix in nearest future? The problem persists since I bought new iPad in July. No issues with fonts in any other app – only Roon remote has it.

It would great to see some update from @support - 4 months is large enough time for bug fix.

Unfortunately, for UI issues like this that only occur on some platforms, it’s very involved for us to identify the issue and determine what the fix might be.

It could be related to the hardware, the operating system, it could be a bug in our code, etc – determining exactly where things are going wrong is possible, but at a minimum you’re talking about a detailed investigation eating up hours and hours of developer time that could be put into all kinds of other priorities, like new features.

This isn’t to say we’re not going to fix it, just to explain why you occasionally see delays like this. It’s much more likely that at some point soon we’ll need to do work on the engine or on an overhaul of our UI – when work like that is required, it’s much less “expensive” for us to do some experimentation and determine whether this is something we can address or something related to the hardware, os, etc.

We will get this fixed @vladimirkl, but I just wanted to give you a little insight into the process here, so it’s clear this isn’t being ignored. We’ll get to it, and we appreciate your patience!

As a new Roon user in the last month I’ve noticed this on both of my PCs… a 15" laptop and a desktop with an 18" monitor.

I get the same problem on my Windows 7PC. I’ve tried messing around with the font settings in Windows, but no matter what I choose Roon chops the tops off. Any indication on when this will get fixed?