multiple devices an setups. One is Sonore ultraRendu to Chord Qutest via usb.

For some of my artists under discography only Qobuz versions are showing up. None of the local library versions downloaded or ripped show up. Here is an example the artist is Damian Coccio, I have 11 albums downloaded from Bandcamp. When I go to Damian Coccio in Roon and click on discography only 10 albums all from Qobus are there. If I click on Focus it only gives me the option to select from Qobuz. In addition I’m also among those who have many artists where no albums or discography are showing up. I’ve added a post to that support thread.

Check if you have the “only complete recordings” setting active. I have found that recordings in the local collection are not found if that toggle is on… seems to be a bug.

Same issue for me. The option for only complete recordings is greyed out for me, but is toggled off anyway.

Thanks for the reply. Where is the “only complete recordings” setting found?

I think this is related to this issue:
https://community.roonlabs.com/t/discograpy-empty-for-several-artists-after-788-update-ticket-in/151917/22

I see the same, but for Tidal.
So, for some artists, only the Tidal albums are visible in Discography, and none of the local albums.
But for other artists, the Discography is completely blank, even if both Tidal and local albums exist.

Hi Jan,
I suspect you are correct as I’m having that issue as well. I hope Roon is able to correct these issues quickly. If I go through Albums I can find everything I think. Unfortunately as it currently stands my wife doesn’t want to use Roon due to these issues.

Go to the Compositions screen, select a classical composition and the toggle will/should be at the bottom of the “Recordings by…” menu on the right. Easy, huh

Thanks Miguel,
The only complete recordings is off so I’d say that’s not the cause.

Just to let the support staff know build 783 did not correct this issue. It’s still there however I did find a less than ideal work around, if you select the edit icon for the artist it gives the option to view all albums by that artist in your library. Also I do have Qobuz streaming.

1.8 B778: Roon doesn't consistently identify albums as part of the library Support

I just looked at Thelonius Monk and apparently it thinks I have only one album in my library. Wow, glad I spent all that time carefully curating Monk’s discography into my library…sigh.

Hi Brandon,
I think there are a whole bunch of these issues that are related and as you noted, not fixed in 783.

I think this is related to this issue:
https://community.roonlabs.com/t/discograpy-empty-for-several-artists-after-788-update-ticket-in/151917/22

I see the same, but for Tidal.
So, for some artists, only the Tidal albums are visible in Discography, and none of the local albums.
But for other artists, the Discography is completely blank, even if both Tidal and local albums exist.

It’s been a week since I first posted asking for support help. I understand that you folks are busy with a great number of issues, but can I at least get an acknowledgment that you have seen my request?

Using the Damian Coccio example you provided, can you share some screenshots of what you’re seeing? Does the album that you’re not seeing in Discography show up on the Overview page?

Hi Dylan,
Thanks for getting back to me.

Here is a screenshot of the Damian Coccio Overview page. Note that only the Qobuz versions are showing up in Overview and Discogrophy. The album “Trial By Light (Bandcamp)” does not show up in either Overview or Discography. 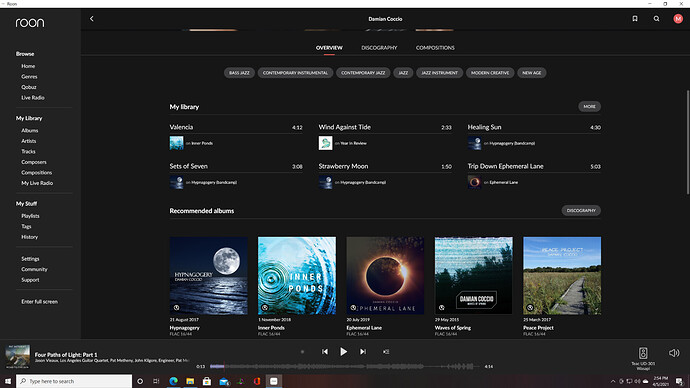 Here is a screenshot of Damian Coccio Discography. 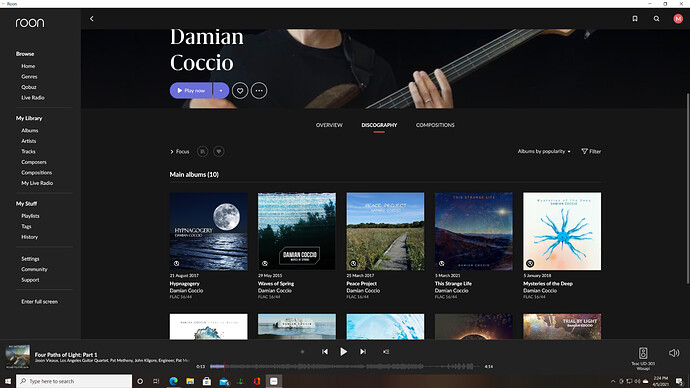 Screenshot (1) resize1885×1060 263 KB
If you look all the albums are from Qobuz not my local library. Now if I click on the edit function for Damian Coccio and select "View albums in library" I can view the local library versions. 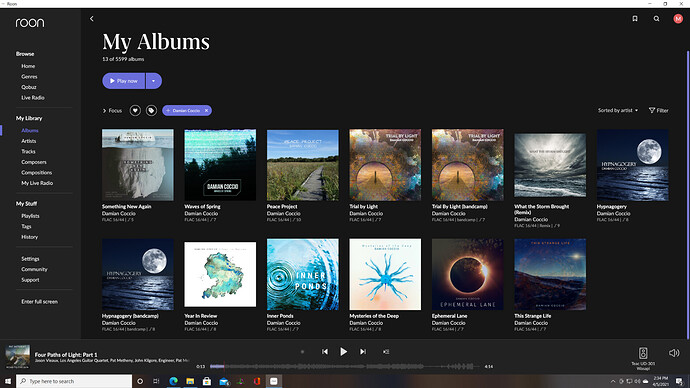 I actually want the local library version in Discography not the Qobuz versions. Here is another example of what’s happening. The Acoustic Allstars were a bluegrass supergroup that played a series of shows mostly at The Birchmere. The tapes of the shows were semi-bootlegs and are only available through my local library. Here is a screenshot of the artist page. 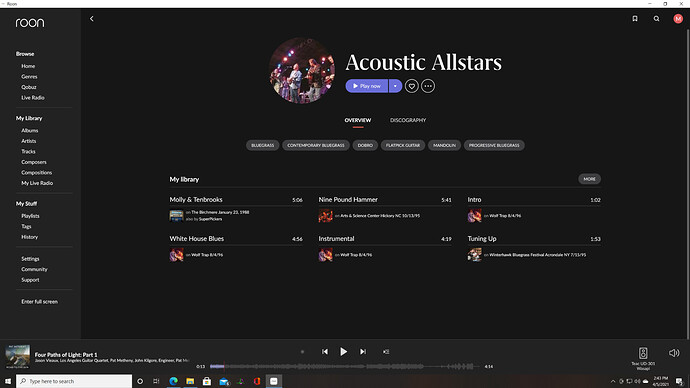 And here is a screenshot of the Artist Discography. 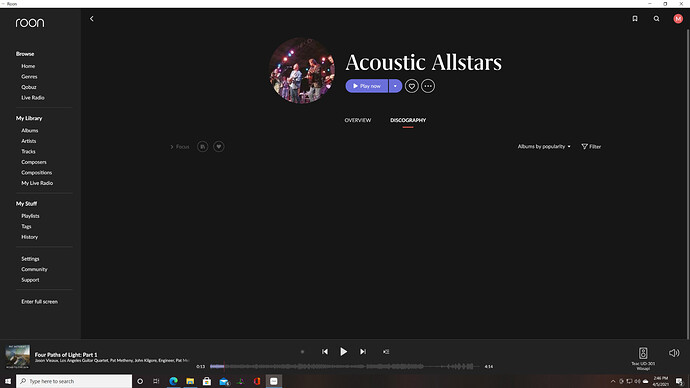 Ok, now if I select the Artist edit button and the “view albums in my library” here is the resulting screen shot. 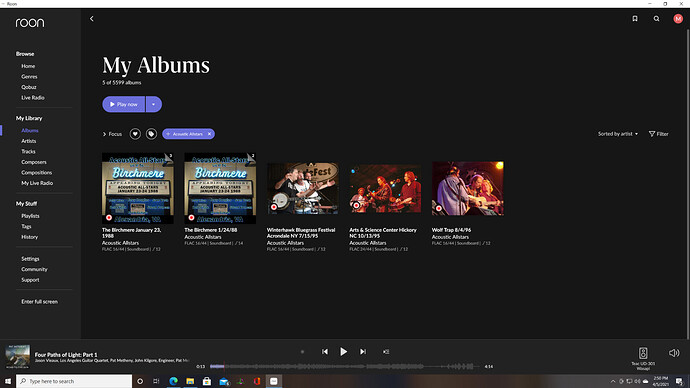 I hope these help you all figure out what’s going on. Thanks.

Here are some more screenshots to show you what I’m finding.

This first series are of a New Year’s Eve Performance by The Tony Rice Unit & The Seldom Scene.
Here’s the Artist Page. 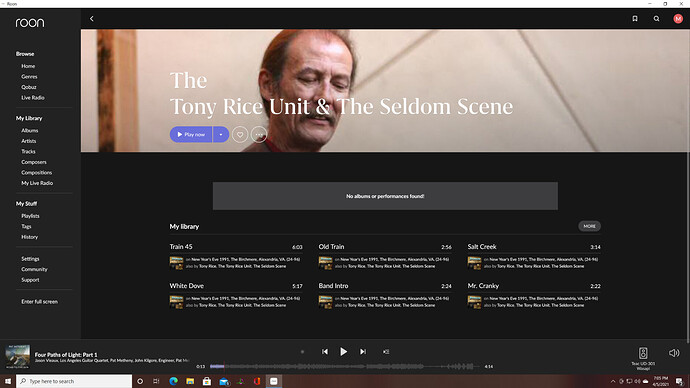 Tony Rice Unit &amp; Sedom Scene Artist Page1885×1060 213 KB
Here's what I get if I select the Artists edit button and then "view albums in library" 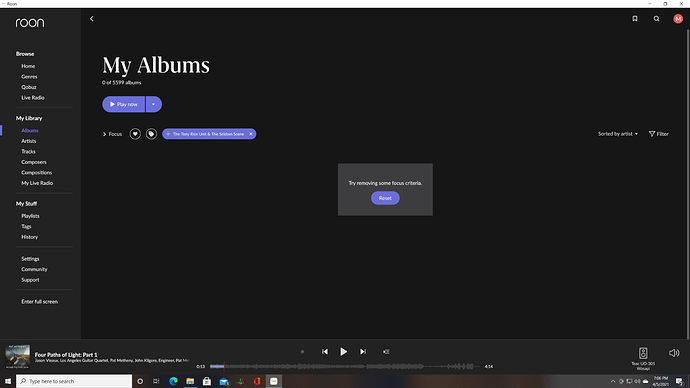 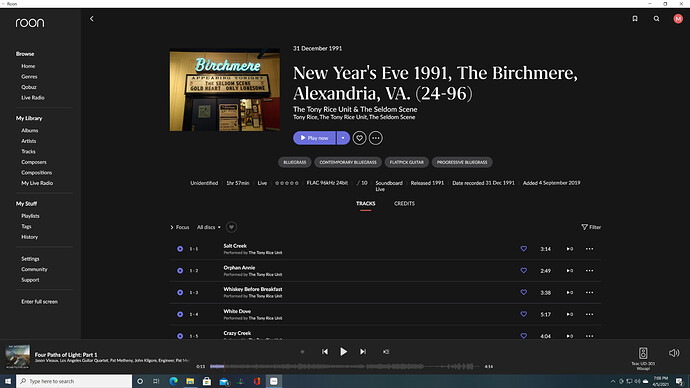 This next series is of the Album “MaMaVig” by Jamie Masefield, Gary Mazzaroppi & Frank Vignola. The album shows up in Frank Vignola’s Artist page Overview and in the Discography. 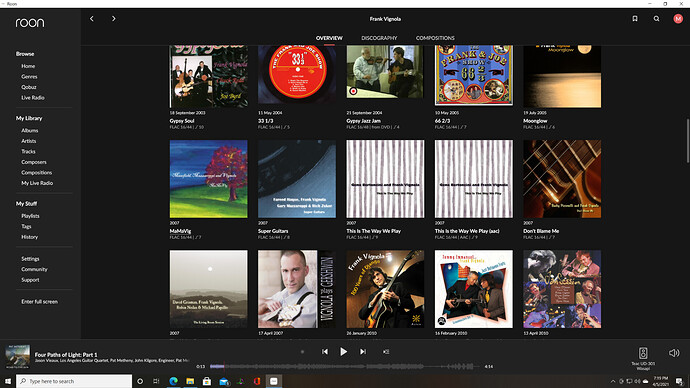 Frank Vignola overview MaMaVig1885×1060 382 KB
But for Jamie Masefield & Gary Mazzaroppi it doesn't show up in overview or discography (Mazzaroppi) but it does show up if I select Artist edit and then "view albums in my library" I'm only including screenshots for Jamie Masefield. Here's his Artist Page 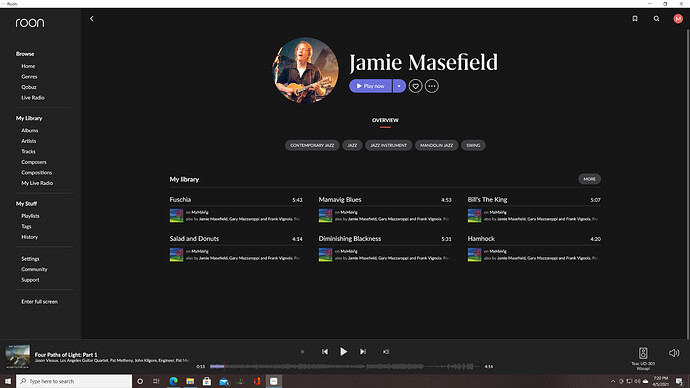 Jamie Masefield overview1885×1060 170 KB
And here's what I get if I select edit on the Artist page and then "view albums in the library". 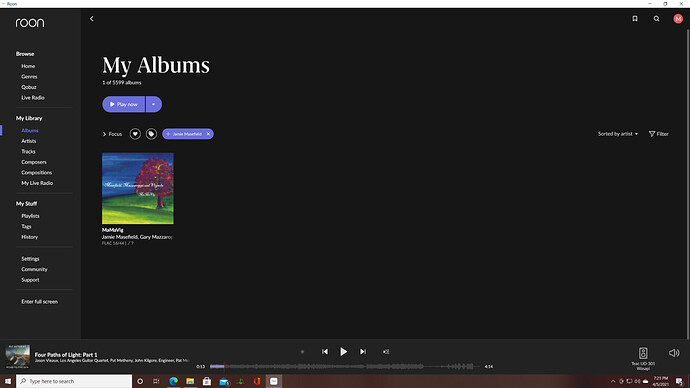 A few updates for you. After a post from Scott G, I went back and checked the Damian Coccio albums, I was able to go through the album edit function and Identify about 2/3 of Damian’s albums in my library. Now when I go to the Artist page all of his albums in my library are showing up in Overview. 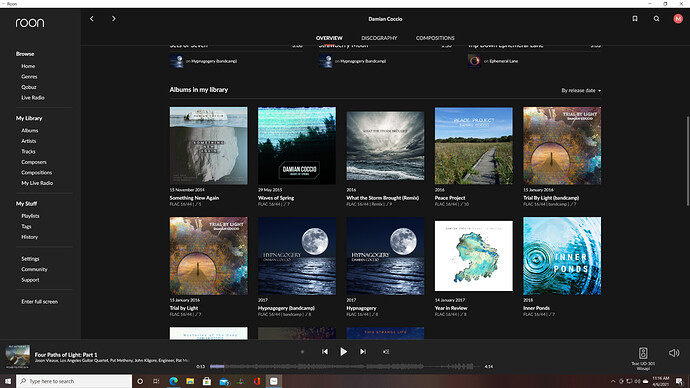 However when I pull up Dicography the album “Trial By Light (Bandcamp)” a different version is not there. 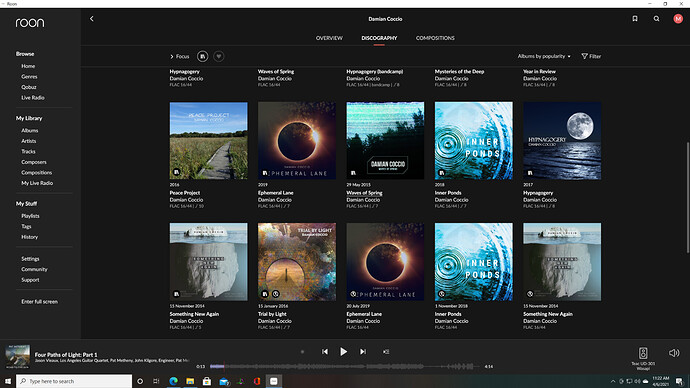 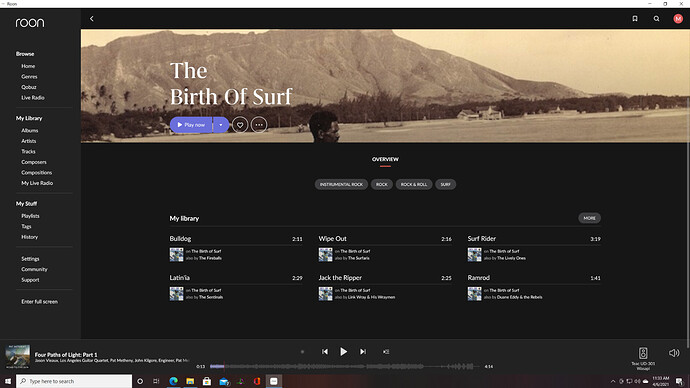 Birth of Surf Overview1885×1060 219 KB
There is no 'Discoraphy' section. If I select Artist edit and then "view albums in library" I get this. 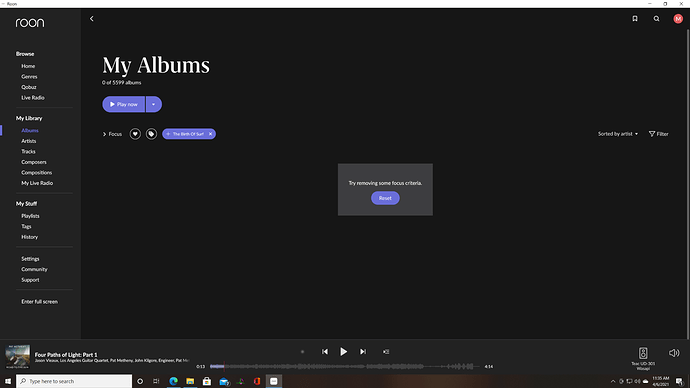 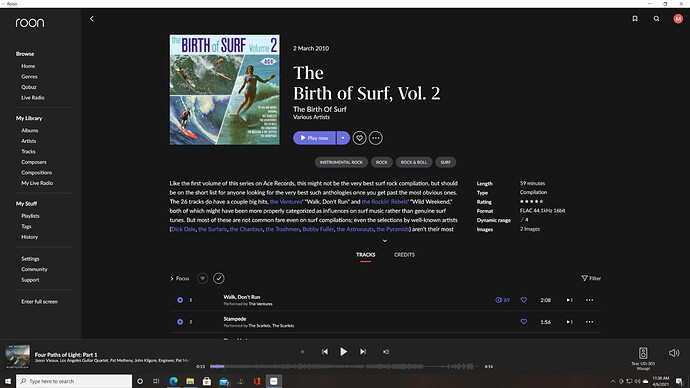 Again thanks for your time. I hope all this helps, I’d love to get back to a smooth operating system.
Regards,
Mario

I noticed that it has been over two weeks since I started this post in support and it’s been almost a week since I’ve heard from support. I’ve also noted it’s going on three weeks since this type of behavior was first reported. It seems like there have been more reports of this type of behavior since then. Dylan or Support can you give us some idea of where things stand with a fix?
Regards,
Mario

New Bug in 1.8 - 778: Artist Appearances no longer show on artist page and discography [Ticket In] Support

Thanks for your patience as we investigated recent reports of missing albums on the artist page. I’m following up with some good news: We’ve just released Build 790, which includes a fix we believe should improve the vast majority of cases where albums are missing. For more details, please see our release notes: