I cannot seem to get Roon Server to install on the SSD Volume in my QNAP 871. 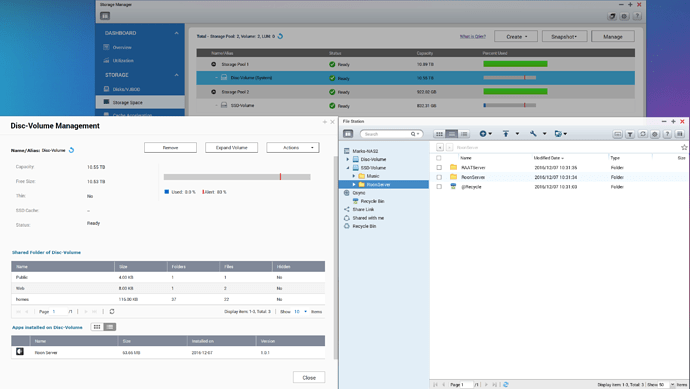 That’s pretty normal, but if you do want to force the app on to the SSD as well, then I think there is an option to specify the volume at install. I also think it’s possible to move apps to different volumes through the control panel. I’m out and about at the moment and I can’t remember the exact menu item you need to go to.

I can’t say for sure either. I only have 1 volume in my qnap. I just read that you should be able to specify the target volume during installation of the qpkg. Maybe you could check the App Center settings if there is an option for a default installation volume.
But the important thing is that your database is already located on the ssd. As this is the directory that needs a fast access to make Roon react fast.

thanks Christopher. I cannot see an option for default volume for App center settings but it seems logical that there should be something. When looking at the “volume info” within the App center a table is shown which includes app installed in each volume, so it must be possible to install apps to different volumes and not just the system one. I will try and raise this with QNAP support but they are notoriously slow and not always on target.

thanks Mark. I have tried installing this a few times but cannot see an option to select which volume to put it in. If you do find a way to move this (or find something I missed doing the install) then let me know

I will definitely have a look for you tonight if you aren’t sorted beforehand.

I will try and raise this with QNAP support but they are notoriously slow and not always on target.

Let me know, what they respond.

I had read the first part of this about having the option to select the volume at install. I don’t seem to get this even though I have 2 volumes configured.

but missed the part in yellow about volume selection being supported in the app. Perhaps that is the issue

So I’ve had a poke around and I can’t find a function to move an app between volumes post install. I may well have got it confused with the option to move a shared folder between different volumes, which is definitely there.

As you saw from the notes, if supported there is an option to install on the volume of your choice. I tried it on a QNAP app I don’t have installed and it works: 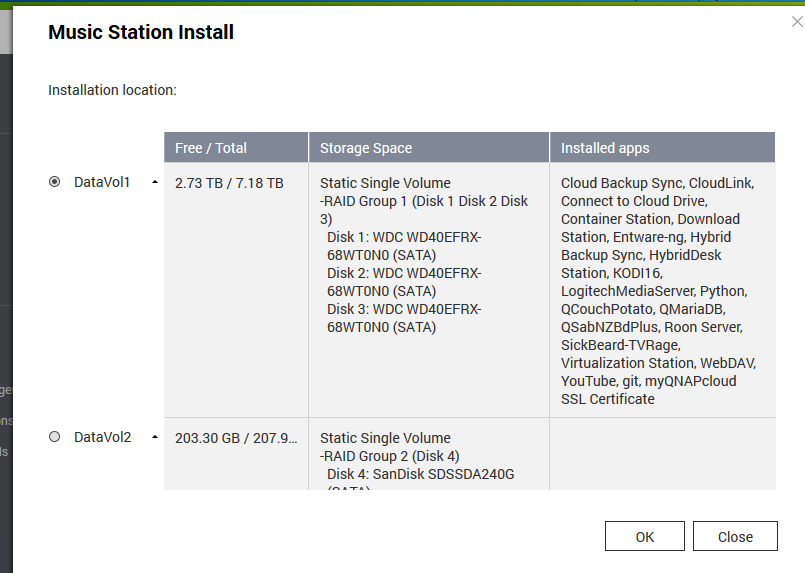 But maybe @crieke needs to enable that functionality in his .qkpg wrapper code, or something?

Thanks Mark, that’s very helpful.
I have just tried some similar installs and noticed that some apps offer the option you show in your screenshot and some do not. The Roon qpkg doesn’t seem to. So, I think you found the issue.

In the meantime as Chris says, at least the database is in the SSD volume which is the important part for Roon. Hopefully there can be an update at some time for the qpkg code

Yep, the Roon qkpg is a tiny app, so it shouldn’t cause too much of an issue on with your setup.

I will look into it. I could not find an option to enable this in their QDK documentation.
I will take a look in one of the qpkg, that has this feature, if this is the cause of it.
Can’t do it in th next days though, as my stuff is currently in boxes and will be moved to my new flat.

thanks Chris, much appreciated. happy moving!

FYI, here is what QNAP support had to say about it. It’s hard to be 100% sure what Arun is saying below, but it doesn’t seem correct based on what we have seen with some apps having the ability to select which volume they are installed on and some not. Perhaps he means that all 3rd party apps are automatically installed on the system volume.

"Thanks for writing us.

First of all, we don’t support this Roon app installation as per policy. Any third party app which is not supported by qnap, we will not recommend and also support on it.

It could be true. As the documentation of there App Development did not mention anything about the installation volume, it could be that this can only be enabled if an app is listed in their official repository. The same thing applies to adding a screenshot and description text.
But nevertheless I will try to look into it when I am settled again.

Your Roon Server shows up in your SSD-Volume, just like your Music folder.
At least that is what File Station says.
I think it is installed in the right place, so don’t worry about QNAP’s terminology.

Rein_Dekker, the file station is showing the RoonServer shared folder on the SSD Volume and this is actually the most important part (it’s where the database goes). However, the actual qpkg code is installed on the HDD. Overall, I think this is fine since the database has the SSD performance needed

I have now had this confirmed by QNAP, basically they will only give the option to install on a specific volume for QNAP supported apps under certain circumstances, otherwise they go by default onto the System Volume (the 1st one to be configured during the NAS setup). Here’s what they said after I asked them why certain apps (like Music station) have the option of where to install:

These apps required a lot of space hence we have provided the option of installing in different volumes.

Its not the case of other normal apps hence we have installed in the system volume.

If i install the music station or photo station, these apps consume lots of CPU and memory resources which will let the system to react slowly.

I can do this for other apps to be installed in different volumes as “feature request” but it will take time.

If its third party app, we cannot raise it as “feature request”, first it has to be supported by QNAP system.

Hope you can understand. Thanks!

A quick update to this. I have had Roon installed on my QNAP for about a month now. Overall, I would say this is working well with only minor quirks as would be expected. One issue I have noticed, however, which is probably not ideal in the long term is disc activity.

To recap, I configured the QNAP with an HDD volume and an SSD volume, the aim being to use the SSD volume exclusively for Roon. The Roon database is installed on the SSD and also the music library is on the SSD. The Roon application was installed by default onto the HDD (the system volume). Currently this QNAP NAS has no other applications installed, just Roon.

The “issue” is that the HDD volume never stops - it is active 24/7 and I have confirmed that this constant HDD activity is caused by Roon, if I disable Roon the HDD activity stops and the HDD volume eventually goes into standby. This constant disc activity cannot be good for HDD life but must also be a sign of something not working optimally, especially as there is no Roon related dated on the HDD.

This update is for information only, but it would be interesting to know if other QNAP NAS users have noticed the same behaviour

I never think about it but I am told discs are happy to run 24/7.